The Daily Northwestern • May 24, 2017 • https://dailynorthwestern.com/2017/05/24/ae/bienen-ensembles-combine-for-concert-at-millennium-park/ 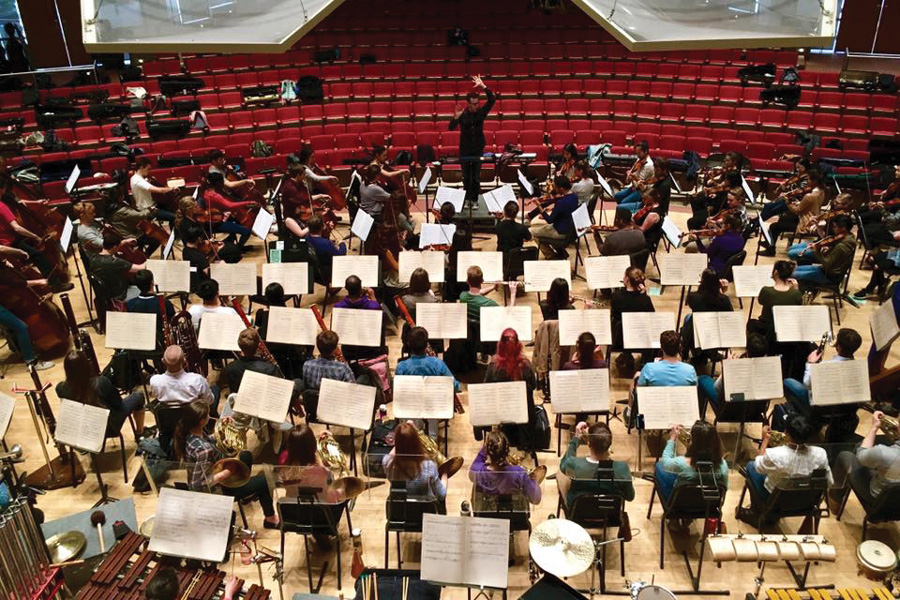 Contemporary Music Ensemble Co-Director Alan Pierson leads the ensemble in a rehearsal of “Ameriques” by Edgard Varese on Wednesday. The piece is written for an extremely large orchestra, with more than 115 musicians on stage.

The annual Northwestern concert in Millennium Park is going to be a “huge surprise,” in the words of Maestro Victor Yampolsky.

Yampolsky said the project originated when Alan Pierson, co-director of the Northwestern Contemporary Music Ensemble, approached him wanting to introduce the school to works by Varèse and Zappa. Yampolsky suggested collaborating with CME, he said.

The concert will be held twice: once on May 26 at Pick-Staiger Concert Hall, and once on May 28 at Jay Pritzker Pavilion in Millennium Park. Most of the pieces on the program are written for a very large orchestra, Yampolsky said. He said the performance will have the “biggest ever group congregated onstage.”

Bienen senior and concertmaster Amy Blackburn said the music is very different than what she is used to playing in NUSO. She also said the program is difficult because there is a different conductor on each piece.

“We work on rhythm a lot because there are so many complicated rhythms in this music,” she said. “Normally, the most complicated rhythm we have is a quintuplet, but now we have all these crazy things. … It’s coming together better than I thought.”

Graduate conducting student Taichi Fukumura will conduct “G-Spot Tornado,” a short piece by Frank Zappa that will serve as a written encore to the concert in Millennium Park, he said. The piece was originally written for a synclavier, a digital synthesizer, and was not meant to be performed by people. It was later arranged for a chamber ensemble of about 20 people, Fukumura said.

But for this concert, there will be roughly 115 people on stage, he said.

“Being able to go out to share what we do at Northwestern to the public is always a fantastic thing,” Fukumura said. “We don’t get to do that necessarily very often. From the contemporary repertoire, they’re very exciting and accessible pieces to listen to. I think it will be a cool way for people to get to know the type of stuff we’re doing and also the type of music that we’re putting out there.”

Outdoor concerts, especially in the summer, are entertaining concerts and the programs are usually very popular, Yampolsky said.

“It will be a wonderful event for the entire school of music,” he said. “To have such a large amount of students, playing all kinds of instruments and presenting something very fresh and very new, will be such an unusual and memorable collaboration.”