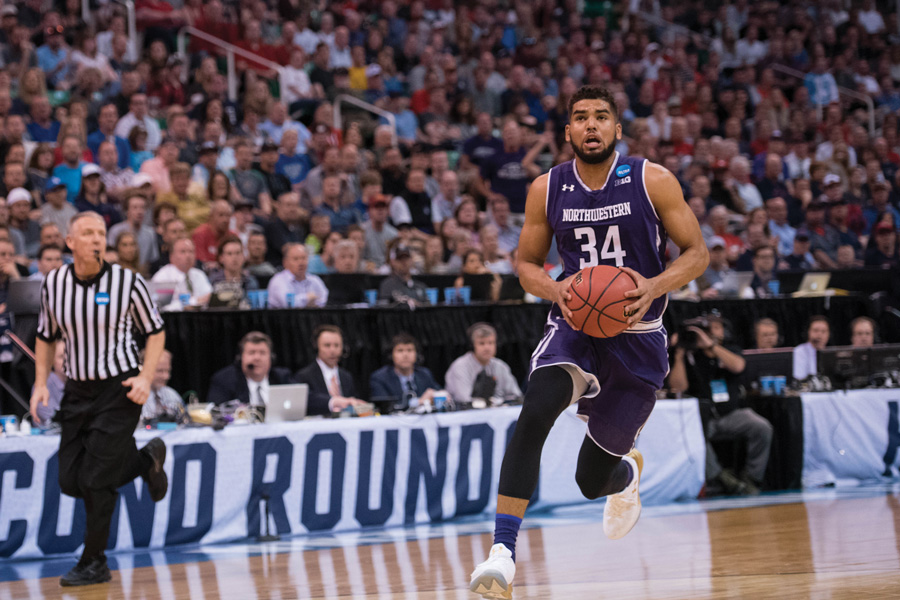 A broken wrist sent Sanjay Lumpkin to Salt Lake City, and maybe the Wildcats to the NCAA Tournament.

The story is textbook evidence for Lumpkin’s theory that things always happen for a reason and a coincidence that the graduating senior forward has reflected on endless times over the past year.

In his first season at Northwestern, 2012-13, Lumpkin missed much of the early season with mononucleosis, came back for three games in December and then broke his wrist in the first practice after Christmas, sidelining him for the rest of the season. It put him on the borderline of eligibility to receive a retroactive medical redshirt.

This season — the extra fifth year that the redshirt afforded him — Lumpkin captained the Cats to their first-ever NCAA Tournament appearance.

“I should be done by now, but it’s crazy how things worked out,” Lumpkin said after the tournament selection show in March, when NU discovered it was Salt Lake City bound. “The reason why I came to this university was to be a part of this first team, and to say I was able to make history is extremely special.”

Even Lumpkin likely would’ve had trouble foreseeing this storybook conclusion in March four years ago. His freshman year had gone disastrously, the Cats had limped to a 4-14 Big Ten record and the coach who had recruited Lumpkin out of the Minneapolis area, Bill Carmody, had just been fired.

But then he received two much-needed pieces of news from athletic director Jim Phillips: His redshirt had been granted by the NCAA, and Chris Collins had been hired as the team’s new coach.

Quickly, Lumpkin realized he’d been given a clean slate, and Collins realized he’d found the player who he would later describe as his “rock.”

“Right when we got here, it was about figuring out who was in the fight with us,” Collins said. “In the workouts, he was diving for loose balls, running as fast as he could. Right away, you could see what a competitor he was, and that’s what got him on the floor. That first year, he was a starter for us solely because he would do dirty work.”

And also because he found a new position. Despite being recruited to Evanston as a wing, the relatively undersized 6-foot-6 Lumpkin shifted into a power forward role.

Thrust immediately to a heavy role, Lumpkin played 33 minutes in just his third game ever under Collins and went on to average at least 22 minutes per game in all four seasons under the new boss.

Drew Crawford, a team veteran who had grown close to Lumpkin while nursing an injury of his own in 2012-13, took in Lumpkin as his off-court roommate and on-court protege in 2013-14. He helped Lumpkin swiftly transform into a defensive maven.

“It’s really easy to mentor a guy like him because he really soaks everything up and … works extremely hard,” Crawford told The Daily last year. “You enjoy playing with and enjoy leading a guy like that. He’s willing to do everything in his power to help the team.”

Asked about Lumpkin’s defensive acumen, Collins rattled off story after story about when Lumpkin forced a game-saving turnover on Illinois’s Malcolm Hill, and another one when he locked down Wake Forest’s John Collins, and more notable feats.

But one story stood out in Collins’ mind, perhaps because it was the first: Lumpkin shifting onto 7-foot Purdue giant A.J. Hammons in the final minutes of a January 2014 game and holding the future NBA player without a field goal for the rest of regulation — and overtime, and double overtime — in a dramatic 66-63 NU win.

“I knew he obviously had a lot of size on me, but I just didn’t care,” Lumpkin said.

Over the course of the following three and a half seasons, Lumpkin’s unique combination of strength and lateral quickness and resulting ability to guard many different positions consistently gave the team rotational flexibility at the “three” through “five” spots.

The innateness of those traits also allowed Lumpkin to grow into a mentor for his teammates just like Crawford had been for him. Collins credited Lumpkin for improving the defensive skills of rising seniors Bryant McIntosh and Scottie Lindsey and rising junior Vic Law, who now compose the core of the Cats’ lineup.

“Sanjay was never measured by stats,” Collins said. “We needed him on the floor, and even though at times he’d only get 2 points, 4 points, his presence for us was as a physical guy, as a guy who would defend multiple positions, as a guy who brought his heart and soul (and) carried it over to his teammates.”

Scoring just 2 or 4 points was only acceptable, however, if Lumpkin was at least enough of a threat to make defenses guard him — to not be an offensive liability.

That potency took time to develop.

In his first full season, Lumpkin converted on a measly 36.8 percent of his shot attempts and said he would regularly forego open shots to drive to the hoop, giving opponents little reason to use a man to cover him on the perimeter.

“At times, I hurt our team by passing up open shots and things like that. As my years went on and I got more comfortable, I started scoring more,” he said. “I knew I wasn’t going to be a guy … that would have special plays set for me. I was going to have to run in transition, get O-boards, take open shots and just take what was there.”

By his senior year, Lumpkin shot 55.8 percent from the field. He hit double digits five times in one seven-game stretch during non-conference play and tallied 15 points in a win over Indiana in January.

He wasn’t a superstar, but he was capable — and at no moment was that offensive growth exemplified better than during a critical stretch in NU’s statement win at Wisconsin in early February.

“He was wide open and he shot an airball,” Collins said. “He came to the huddle and we said, ‘Just shoot it!’ About a minute later, they’re making a run and we kick it to the corner and he just buries a big shot.”

Lumpkin himself, thinking back on the moment, chuckled.

“I caught that second one, I didn’t even hesitate. I just let it fly, and it was cash,” he said. “That second shot was probably a shot I would’ve passed up my freshman year … so it was definitely symbolic.”

Still, Lumpkin’s 9 points that Sunday in Madison were far from headline-grabbing. Nor were his mere 2 points in the Cats’ instant-classic win against Michigan three weeks later, when Vic Law dropped 18 and Nathan Taphorn threw an impossible inbounds pass to Dererk Pardon, who made a buzzer-beating layup. Lumpkin was just another warm body in the ensuing dog pile.

But after the mayhem, Collins knew who to thank.

“He’d been here five years, he’d been through a lot,” the coach said. “To have that guy that could kind of be my connection, to carry that fight and that toughness out into the rest of the team, I thought it was huge for the way we finished the season.”

After finishing his master’s degree in Sports Administration this year, Lumpkin said he plans to pursue a professional basketball career overseas.

He’ll leave Evanston with 137 career appearances to his name, ranking behind only Crawford for the most in NU history. He’ll also leave having come nowhere close to the program record-holders in every other category except one — number of times captaining NCAA Tournament teams.

And for the role-shifting, size-defying 23-year-old who, four years and one broken wrist ago, didn’t expect to even be around for the 2016-17 season, that will do.

“I want to be remembered as the guy that went to battle every night, played as hard as I could every night, and didn’t care who I was guarding or who we were playing against,” he said. “I feel like this is just the start for Northwestern basketball and I’m so happy that I was a captain of the first team that was able to do it.”