The Daily Northwestern • May 23, 2017 • https://dailynorthwestern.com/2017/05/23/city/aldermen-approve-group-to-promote-citizen-oversight-of-police/ 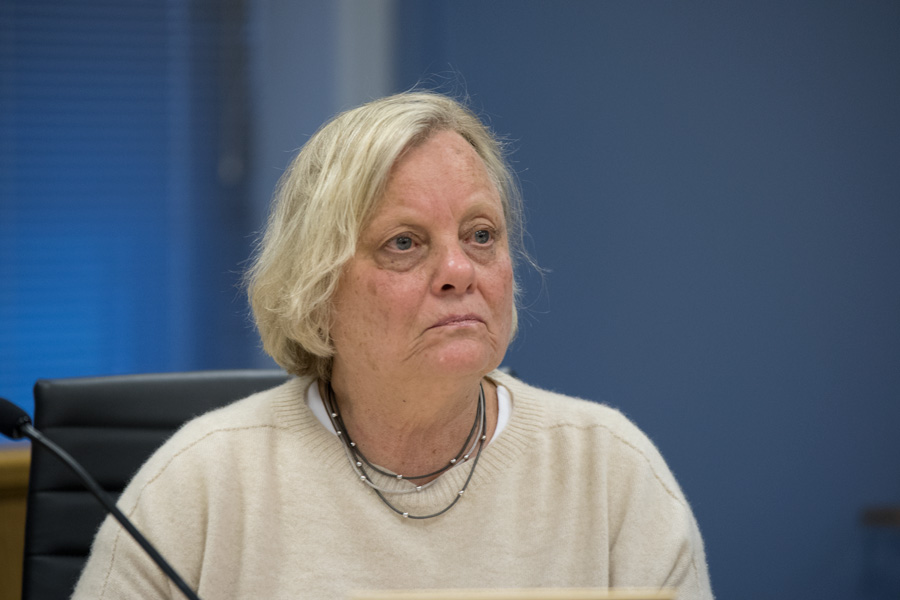 Ald. Judy Fiske (1st) speaks at a city meeting on Monday. Fiske said she supported the creation of a citizen oversight group to build trust for Evanston police.

The working group will suggest improvements to EPD’s current complaint review procedures to increase transparency. The approval of the working group comes after a Human Services Committee meeting earlier this month considered parameters and goals of the group. The “Citizen Complaint Working Group” — comprised of nine Evanston citizens appointed by Mayor Steve Hagerty — will have six to nine months to report its findings to the Human Services Committee.

Evanston Police Chief Richard Eddington said in January one would be “hardpressed to find a jurisdiction with a more open and transparent discipline system.”

Eddington said in January that discussion in an oversight group would be difficult because members of the potential working group may not have experience in making decisions about the police’s use of force.

“Use of force is a very complicated matter,” he said in January. “Those are issues that police officers … spend a significant amount of time making a decision on.”

Evanston resident Bobby Burns said though he trusts the mayor to appoint the members, he feels Hagerty should make sure the citizens are independent from the police department.

“If the community feels as if this is just an extension of the police department investigation … they’re going to feel like it’s not worth even having it,” Burns said. “What folks wanted is … a community-led examination of our police process.”

Ald. Judy Fiske (1st) said it’s important for the working group to be diverse to reflect communities “most impacted” by police.

“The purpose of this, really, at the beginning, was to provide a venue to establish trust among the citizens of Evanston in our policing,” Fiske said. “Once you form a committee, the natural response to a committee is to feel that someone is being excluded, and I think that would defeat the purpose of what we’ve been working for.”

Betty Ester, a member of Citizens Network of Protection, said many residents were “deeply frustrated” by the Human Services Committee’s rejection of the creation of a task force proposed at a meeting earlier this month.

She said the decision to allow Hagerty to appoint members of the working group did not seem like a compromise, and that it might affect the group’s independence from the police.

“What the community is left with now are many unanswered questions and a big criticism that these residents of Evanston will once again be left out of the discussion and the decision-making process,” Ester said before the vote.

Fiske said she wants to make sure everyone feels heard in the working group.

“I hear everyone, and we will have oversight on the Human Services Committee, which I’ll be chairing for the next few months,” Fiske said. “We’ll make sure everyone’s voice is heard.”

Hagerty said he will “take into account” the concerns raised by aldermen, Ester and Burns.

Burns said he ultimately wanted to make sure that future members of the standing group would let the evidence decide if a complaint was handled fairly.

“That’s really what is at the heart of this: People want this to be separate, for the folks appointed to not have made up their minds in any direction,” Burns said. “Then let’s move together as a community.”