The Daily Northwestern • May 23, 2017 • https://dailynorthwestern.com/2017/05/23/campus/stanford-professor-gives-lecture-on-age-its-relationship-to-happiness/

Stanford professor gives lecture on age, its relationship to happiness 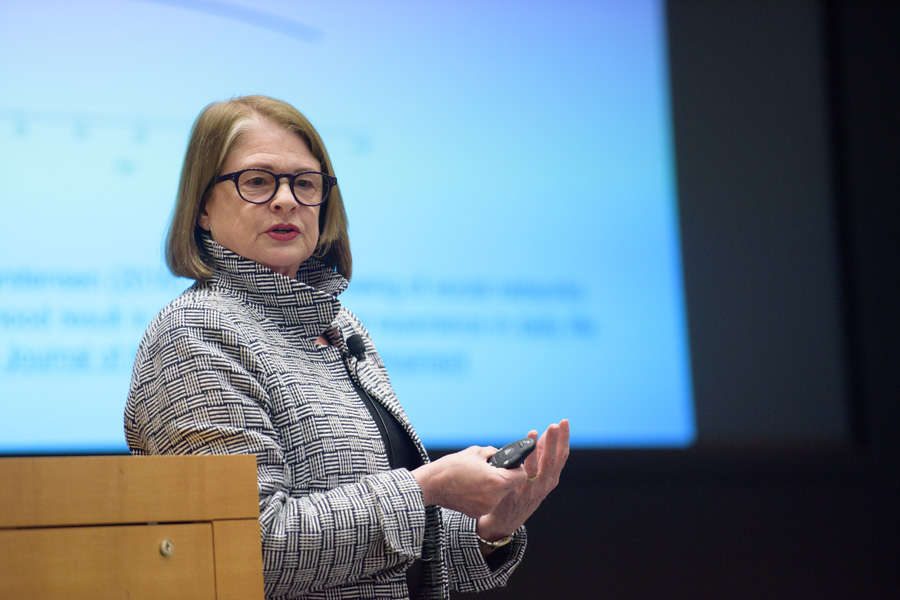 Stanford University psychology Prof. Laura Carstensen gives a lecture in the McCormick Foundation Center Forum. During the event, which was held to honor former Northwestern Prof. Bernice Neugarten, she shared her research on the some of the benefits of old age.

A Stanford University professor said the common perception of old age relating to unhappiness is misguided at a talk on campus Monday.

Prof. Laura Carstensen spoke about the relationship between age and happiness at a lecture hosted by the human development and social policy program at the School of Education and Social Policy.

The lecture, held at McCormick Foundation Center Forum in front of about 70 people, honored former Northwestern Prof. Bernice Neugarten, who helped found SESP’s graduate program in human development and social policy. At the event, Carstensen talked about research from her book, “A Long Bright Future: Happiness, Health, and Financial Security in an Age of Increased Longevity,” which explains that as people age, they tend to appreciate their mortality.

Carstensen noted that there is a false conception that elderly people are sad and lonely. She said as people grow older, they are “pruning their social networks,” leaving the meaningful ones to develop and grow stronger. Based on these observations, Carstensen said she formed the socio-emotional selectivity theory, which says people appreciate mortality more at an older age.

“She put her research in a way that was easy to follow and more digestible,” Nussman said.

Carstensen said she hopes to continue her research into the hopeful side of aging.

“We are encouraged that we may be able to use some of this information that we have learned to both encourage social engagement in communities and families in a meaningful way” Carstensen said, “And perhaps find ways that we can help younger people be happier as well.”