The Daily Northwestern • May 23, 2017 • https://dailynorthwestern.com/2017/05/23/campus/schapiro-prof-gary-saul-morson-discuss-new-book-applying-humanities-to-economics/ 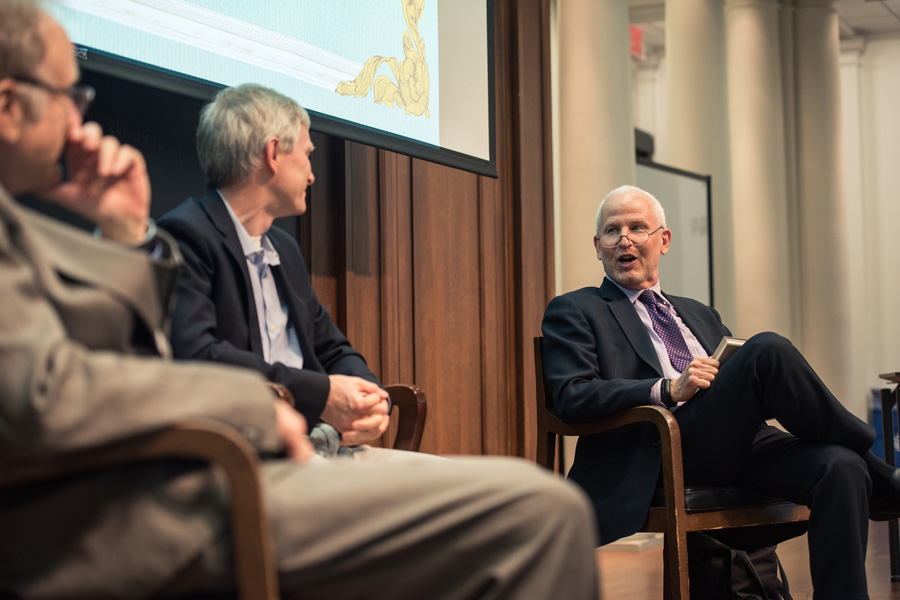 University President Morton Schapiro talks about his new book, “Cents and Sensibility,” with Slavic languages and literatures Prof. Gary Morson. Schapiro said though economics is perceived as a pragmatic and logical field, there is a need to think about the moral implications of policies as well.

University President Morton Schapiro and Slavic languages and literatures Prof. Gary Saul Morson spoke at an event Monday about their new book, which discusses how the humanities and social sciences can be applied to the field of economics.

About 60 people attended the event hosted by Political Union in Harris Hall. Schapiro and Morson spoke with economics Prof. Mark Witte about their experiences writing the book, “Cents and Sensibility,” and the book’s central themes.

In “Cents and Sensibility,” Schapiro and Morson argue that the humanities and social sciences offer insights for economists to make better predictions, models and policies, according to the Princeton University Press website.

The book contains many examples of how economics could be “greatly enhanced” if economists embraced the humanities and other social sciences in their work, Schapiro said. Though economics is often considered to be a systematic and pragmatic field, there is still a need to consider broader moral implications of policies, he said.

Schapiro brought up the example of a memo written in the early ’90s that suggested toxic waste from North America, Western Europe and East Asia be sent to Central Africa. The memo’s reasoning was that Central Africa’s life expectancy was much lower, and even if people there lived longer they did not make as much money as more developed countries, ignoring the value of human life, Schapiro said.

“It was the kind of economics that is on one hand makes sense and almost brilliant but on the other hand, everything that’s wrong with our field,” he said.

Schapiro said the book argues against such “narrow economics” due to its disregard of morality and perspectives outside of economics. The book gives several examples of such “clever” yet amoral cases, which Schapiro finds “insane,” he said.

Morson said studying the humanities allows people to understand the world beyond their own beliefs. When economists appreciate the humanities, they can present arguments and perspectives that are much deeper and more persuasive, he said.

Schapiro said “Cents and Sensibility” is different from any of the books he or Morson had previously written, as most of the content comes directly from their class notes from Humanities 260, a class he and Morson have taught together.

Weinberg junior Max Rowe, co-president of Political Union, said the group invited Schapiro and Morson to talk about their book and engage the NU community in a discussion about what two seemingly unrelated fields can learn from each other.

“It was the kind of thing we wanted to do where we think we really did foster some good dialogue,” he said. “People had good questions and people were really engaged with the material.”

Weinberg junior Lars Benson, who took the class Schapiro and Morson taught, said Schapiro’s outlook on economics resonated with him.