Cradles to Crayons to be primary beneficiary for Dance Marathon 2018 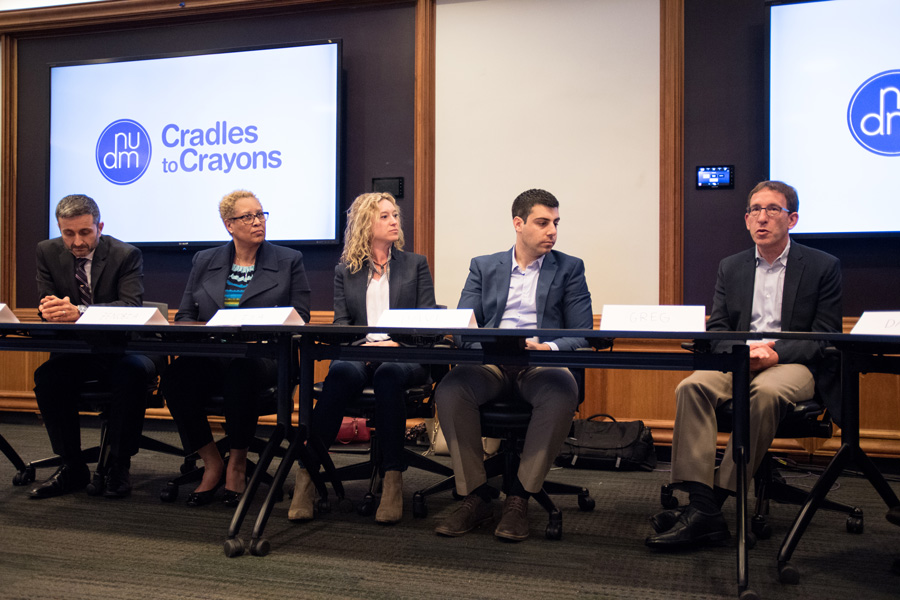 Panelists discuss the impact of poverty on children during Northwestern University Dance Marathon’s official announcement of its primary beneficiary, Cradles to Crayons. The nonprofit organization provides essential items, such as books and clothes, to children who are homeless or come from low-income families.

Children’s nonprofit Cradles to Crayons will be the primary beneficiary for Northwestern’s Dance Marathon next year, according to a news release.

“Right now, poverty in Chicago is an issue that cannot go unaddressed,” NUDM executive co-chair and SESP junior Jamie Newman said in the news release. “The support that Cradles to Crayons provides is crucial at this exact moment. It is very difficult for children to focus on school and play without pencils to use in school, books to read at home and clothing that makes each child feel confident.”

Cradles to Crayons provides children up to age 12 who are either homeless or come from low-income families with essential items, such as clothes and books, according to the release. The financial donations from NUDM will help fund Cradles to Crayons’ Chicago-based programs, which provide support for the 180,000 children in Chicago living in poverty, the release said. NUDM 2018 will be held March 9 to 11, the release said.

Cherkasov said he grew up on the receiving end of organizations like Cradles to Crayons. Cherkasov said he remembers being 9 years old and the excitement he felt when he received a new coat and boots from the organization. He said he hopes to pass on the feeling to other children in Chicago.

“I remember wearing my brand new coat the next day to school, not knowing where it came from, who found us and how they got into our hands,” he said. “But knowing that it was just for us and somebody cared made a difference. Feeling that pride and excitement, that feeling that somebody cared and really wanted us to succeed has stayed with me my entire life.”

Cradles to Crayons partners with social service organizations, including school districts and homeless shelters, to connect excess resources from communities to children in need, the release said. Each child receives items they need to be “safe and protected from the elements,” according to the release.

NU students will also have the opportunity to participate in service events through the Cradles to Crayons Giving Factory, which houses the organization’s local business and volunteer opportunities.

Miller, who also spoke during the panel, said Cradles to Crayons is only the first step in ending poverty.

NUDM also announced the Evanston Community Foundation will again be its secondary beneficiary. The organization funds a variety of local grants to individuals, families and organizations with the goal of helping Evanston “thrive.”

This story was updated at 9:45 p.m. to include quotes from Greg Miller and Bernard Cherkasov.