The Daily Northwestern • May 21, 2017 • https://dailynorthwestern.com/2017/05/21/sports/the-sideline-confident-but-calm-inglis-brings-passion-for-golf-to-northwestern/

The Sideline: Confident but calm, Inglis brings passion for golf to Northwestern 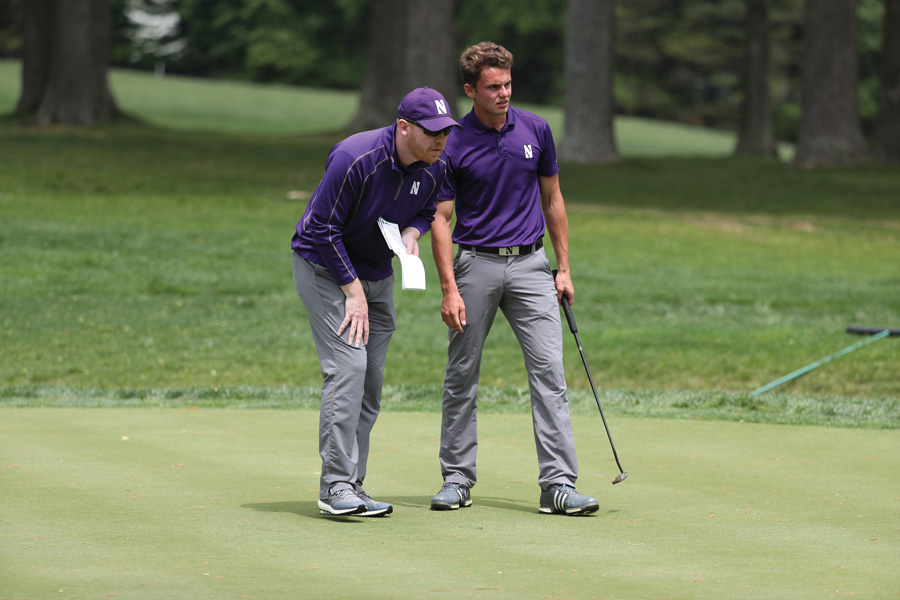 In spring 2010, all David Inglis wanted was to be a college golf coach.

Instead, he found himself working at Bear Lakes Country Club in West Palm Beach, Florida.

Inglis knew he needed some coaching experience on his resume to have a shot at a college job, so he started working at Cardinal Newman High School in West Palm Beach.

Late that summer, he missed out on an assistant coaching job at Ohio State. Frustrated, he started to accept that he might have to work at the country club for at least another year. But another position opened. Northwestern assistant Steve Bailey had left for another job, and NU head coach Pat Goss needed a replacement.

Inglis told Jess Daley, who had played golf for the Wildcats and was a member at Bear Lakes, that he was interested in the open position. Daley called Goss to speak on Inglis’ behalf.

Growing up in Edinburgh, Scotland, Inglis played both soccer — football, in his words — and golf. With guidance from his dad, Inglis often took to the links.

“He was my first coach,” Inglis said. “He was the guy that kind of taught me how to hold it, how to swing it and would take me out golfing every night in the summer. I owe a lot to him. … He was a big catalyst in helping me develop my love for the game as well.”

As Inglis got older, he started to focus solely on golf. He won the Scottish under-16 championship and made it on the Scottish national team. But he knew the best opportunities to continue his career would be in college in the United States.

But his professional career was short-lived. Inglis knew he wanted to pursue a career in golf, so he shifted his focus to finding a coaching job. He took the job at the country club, but it would still be five years before he got the call from Goss.

Goss said when he interviewed Inglis in 2010, he was impressed with his passion for the game.

“For me, that’s always been the number one (criterion) in hiring what was then an assistant coaching position,” Goss said. “It’s a lot of hours, it’s some odd hours and it’s not something you can be doing as a job or because you had a pretty nice experience in college golf. It has to be something you’re really passionate about, and that was very evident.”

Once at NU, his work caught the eye of other college coaches, and Inglis said he had multiple offers to coach at other schools. When Goss was promoted to director of golf and player development, the head coaching position opened.

“The impetus for me to promote David to head coach was just simply because I didn’t want him to leave,” Goss said. “I thought he was doing such an amazing job and knew that he had earned a lot of respect from fellow coaches across the country and we needed to make this job better for David to ultimately stay.”

In 2012, while still an assistant coach, Inglis recruited Matt Fitzpatrick, who was the No. 11 amateur in the world when he signed his letter of intent to play at NU.

“We knew we were getting a great player, one of the best players in college golf that following year as a freshman,” Inglis said. “You get pretty excited about that.”

Because they were pursuing Fitzpatrick, Goss and Inglis passed on a number of talented golfers for that class. Getting Fitzpatrick was a major coup for the program, and he is perhaps the best golfer to wear the purple and white since Luke Donald, who was a four-time All-American when he graduated in 2001 and was the No. 1 ranked professional at several times in his career.

When he got to campus, there was only one problem: Fitzpatrick was, quite simply, too good.

“When I was in school, I loved every minute of it,” Fitzpatrick said. “I made some great friends, I loved being there but I think what happened was when I signed, we didn’t expect any of the things that happened that summer to happen, and things just sort of opened up and I couldn’t really turn them down. It was important for me to take advantage of those opportunities.”

After just one quarter, Fitzpatrick left school to pursue his golf career. He went on to finish tied for seventh at the 2016 Masters, and is considered one of the best young golfers in the world.

But Fitzpatrick’s departure left a gaping hole in NU’s golf program. The team lost its best player and had to replace him with someone expected to be a reserve.

The team struggled that year but has steadily improved ever since, and Inglis said the program is finally getting over the “bump in the road” that Fitzpatrick’s departure left. Fitzpatrick, for his part, still tours professionally with a Northwestern bag, which stands out on tour.

“I’ve got a lot of friends that are still at Northwestern, so it’s a little bit for them,” Fitzpatrick said. “It’s not something you see regularly, and I thought it was the move and it’s gotten a lot of exposure.”

Conor Richardson was a sophomore at Cardinal Newman when Inglis became an assistant. When he was deciding where to play in college, Inglis recruited him to NU, but Richardson eventually chose to play at the University of Florida.

“I really didn’t want to go too far north because of the weather,” he said. “The only school I was really considering in the north was Northwestern, just because of Inglis.”

Because of a redshirt season, Richardson had the chance to transfer and play immediately after his fourth year at Florida. He chose to reunite with his former high school coach in Evanston last year. Richardson said after his career ended that he does not regret transferring, and was happy to have the chance to play for Inglis again.

Goss, who oversees both the men’s and women’s golf programs in his new role, said what jumps out about Inglis is the passion he shows for the sport. He said when he originally considered hiring him, he reached out to Brogden, Tulsa’s longtime coach.

“Bill just adamantly said David was the best he’d ever had,” Goss said. “Not the best player — he was close to the best player they’d ever had as well — but he was best at the details and being a leader and the way he organized, how hard he worked, the way he treated his teammates, all of those things.”

Inglis said when he recruits potential players, he tries to sell them on what he says is a “unique” experience: getting to play golf at a high-level university, while still having the resources he and Goss bring to the table.

Goss’ experience coaching Donald, who was a four-time All-American for the Cats, also plays into the recruiting pitch, Inglis said. And since Goss and Inglis were both promoted in 2014, Inglis said playing for them is like having “two head coaches.”

Junior Dylan Wu, who was NU’s top player for much of the most recent season, said Inglis’ experience as a player makes him a successful coach.

Though he didn’t spend much time working directly with Inglis, Fitzpatrick said he was impressed with Inglis’ coaching style.

Inglis’ team has steadily improved since he took over. This season, the Cats hovered near the top of the leaderboard many times, but never managed to finish on top and collapsed late in the final round of the NCAA Regionals. NU finished second in April’s Big Ten Championships to Illinois, which won its third consecutive conference crown.

Earlier this year, Inglis was named the head coach of Team Europe for June’s Arnold Palmer Cup, which pits top American and European golfers against each other. Goss said it was a huge honor and a metric of the respect Inglis has earned in the golf community.

There could be other offers, but Inglis said he wants to stay and build something at Northwestern.