The Daily Northwestern • May 21, 2017 • https://dailynorthwestern.com/2017/05/21/sports/baseball-wildcats-sweep-rutgers-to-head-to-first-conference-tournament-in-7-years/ 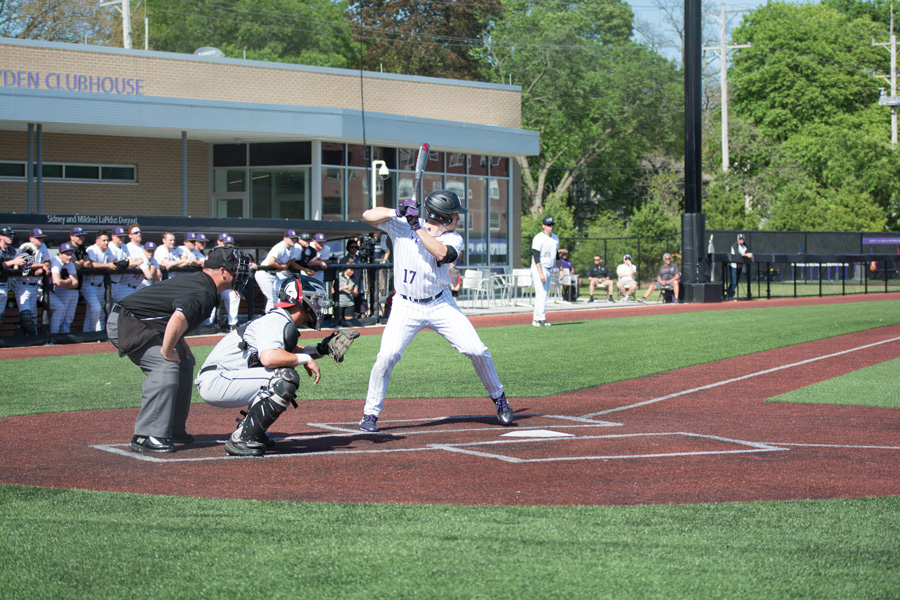 Jake Schieber awaits a pitch. The senior outfielder and the Wildcats secured their first berth in the Big Ten Tournament in seven years with a sweep of Rutgers.

Northwestern had several avenues to reach the Big Ten Tournament.

But amid the results of several teams’ games and myriad qualification scenarios, the easiest was for the Wildcats to win their own contests. They did just that by taking three straight from Rutgers in dominant fashion to clinch the program’s first tournament spot since 2010.

Though over half the conference qualifies for the tournament, NU (24-28, 13-11 Big Ten) hadn’t seen postseason baseball in seven years. Last year, the team posted the school record for losses.

“It was not easy,” coach Spencer Allen said. “We’ve had some tough days, and all the credit goes to these 30 guys. It’s awesome. These guys are feeling good going into it.”

On the final weekend of the regular season, the Cats were led by their seniors on the mound, as Cooper Wetherbee and Josh Davis combined to pitch 14 innings while not allowing an earned run.

The veterans came through at the plate as well, with senior outfielder Matt Hopfner leading the way, going 6-for-13 with nine RBIs on the weekend.

“The key was just being patient and waiting for good pitches,” Hopfner said. “Previous weekends I’ve gotten ahead of myself and been impatient at the plate, but this weekend I was seeing pitches and choosing the right ones to swing at.”

Hopfner had six RBIs in the opener alone as NU stormed to a 14-0 victory Thursday. Junior catcher Jack Claeys got things started with a solo home run in the second inning, and the Cats never looked back.

Rutgers struggled at the plate again in the first game Friday, as freshman pitcher Hank Christie allowed five hits in 7 innings. Freshman infielder Alex Erro had a two-run single in the second, and Hopfner added his own in the seventh for a 4-0 win for the tournament-bound hosts.

“The pitching was the key for us,” Allen said. “We did a great job attacking the zone. We got some big hits from guys too, and it was fun because it was the seniors. I’ve been a part of a lot of senior days, and they don’t always go like that.”

The second half of the doubleheader Friday was much closer, as Rutgers cut the deficit to 5-4 in the ninth and had two runners on base. Senior pitcher Pete Hofman came up clutch, striking out the final batter and setting off the senior day celebration.

At the plate, NU got big contributions from the Rutgers defense, as successive runs scored in the sixth inning on a wild pitch and balk before junior infielder Connor Lind ripped a single that put the Cats up 5-1.

The sweep kept NU in seventh in the conference standings, setting up a matchup with No. 2 seed Michigan on Wednesday. NU was swept by the Wolverines in 2016, but this year’s team is a sharp turnaround from last year’s.

“We’re really happy to lock down that tournament spot,” Wetherbee said. “Being the team to go after such a long drought, that’s a goal we set for ourselves at the beginning of the year. Just pushing towards that and achieving that, and thinking about what’s next after that is a big step for the program.”