The Daily Northwestern • May 19, 2017 • https://dailynorthwestern.com/2017/05/19/campus/visiting-professor-talks-zionism-and-democracy/ 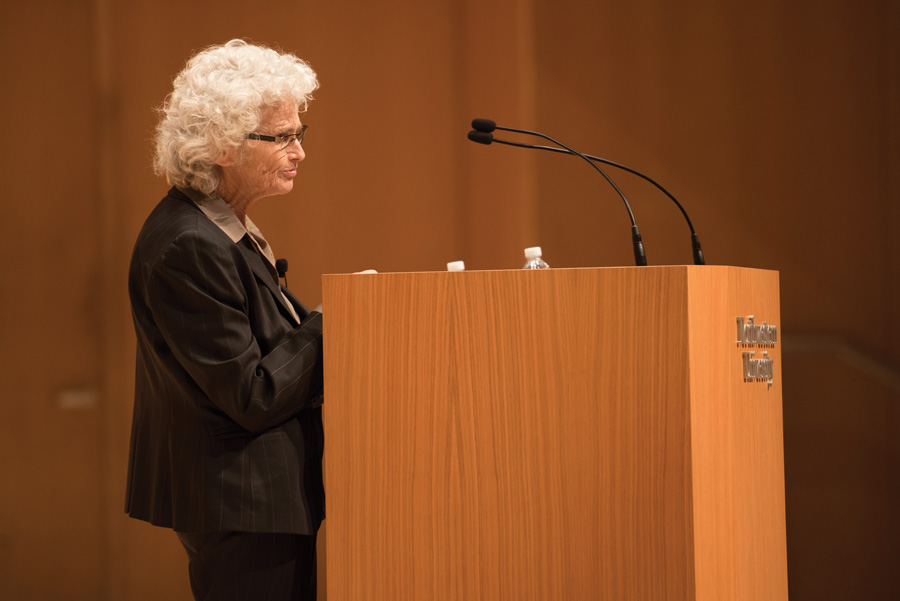 Israel can be both a Jewish and democratic state, visiting Prof. Ruth Gavison said during an event Thursday.

Gavison delivered the annual Philip M. and Ethel Klutznick Lecture in Jewish Civilization, presented by the Crown Family Center for Jewish and Israel Studies and the Jewish United Fund of Metropolitan Chicago. More than 300 people attended the lecture in Pick-Staiger Concert Hall. Gavison has studied human rights as well as religion and politics.

“If you Google her name looking for biographical facts, what you get is a series of articles in which she is quoted, representing all of the topics of the day,” Sufrin said. “Everybody turns to her to get her opinion, so that in it of itself is a biography.”

Gavison is one of the founders of the Association for Civil Rights in Israel and a professor emerita of the Hebrew University of Jerusalem Faculty of Law. She said people question if Israel can be both Jewish and democratic while still prioritizing human rights.

She said she disagrees with claims that Israel must choose between its Jewish and democratic identities.

“This is a claim that doesn’t really actively understand that when a complex society has a vision and the vision has more than one element … the relationships between these elements are always relationships of mutual reinforcements and creative tensions,” Gavison said.

Gavison described Zionism as a movement to establish a national home for the Jews following years of persecution and discrimination. She said Zionism and democracy are compatible because they stress self-governance.

The United States has strong Christian roots, Gavison said, which disproves the claim that democracies must be religiously neutral and “privatize” religion.

McCormick graduate student Ray Jacobs said she entered the event with an open mind because she tries not to be emotionally connected to the state of Israel “as a way to get by.”

Jacobs said Gavison was interesting because she studies Israel for a living and isn’t originally from the United States.

“It was good to get a perspective that’s from that place,” Jacobs said. “A lot of the things that we hear here on campus are from people our age and from here in the U.S.”

Gavison ended the talk by discussing the Israeli-Palestinian conflict. She said the political question of the future of the occupied territories of the Gaza Strip and the West Bank is one of the “most hardest.”

Both sides do not seem willing to reach an agreement, Gavison said. Though she hopes for an agreement soon, she said it “takes two to tango.”

“It really is tragic, and as far as I’m concerned, I’m becoming more pessimistic about it all the time,” Gavison said. “I’m not sure what can be done.”