The Daily Northwestern • May 18, 2017 • https://dailynorthwestern.com/2017/05/18/sports/mens-golf-northwesterns-season-ends-with-heartbreaking-collapse/ 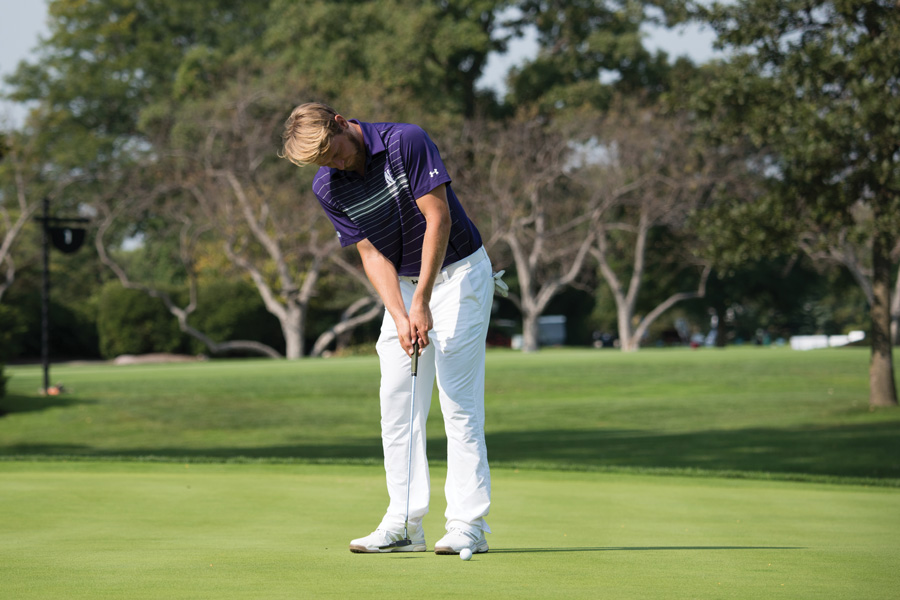 Andrew Whalen watches his putt roll past the hole. The senior and the Wildcats blew a huge lead in the NCAA Regionals on Wednesday and saw their season end.

The Wildcats lost in a playoff to Jacksonville for the fifth and final spot to NCAA Championships from the Baton Rouge regional. After 54 holes, the teams were deadlocked at 19-over par, and NU’s season ended shortly thereafter after falling in the second playoff hole.

“It’s brutal,” coach David Inglis said. “You work so hard all year to put yourself in that position and to not get it done is beyond disappointing, it’s awful. Guys are just dejected. The season’s over, obviously for the seniors, you really feel for them, because that’s it, that’s their college career, finished. Overall, just bitter disappointment.”

As has been the case many times this season, the Cats got off to a rough start and ended the first day tied for 8th place. But they stormed back on day two, jumping into a fourth place tie after carding the second best round of the day. Inglis said he wasn’t sure what caused the first day lull.

On the third and final day of the tournament, NU stayed in the top five for most of the day, even moving past No. 7 Oregon at one point. After a rough 16th hole, the Cats got three clutch birdies from freshman Everton Hawkins, junior Dylan Wu and sophomore Ryan Lumsden to take a one-stroke lead on the Dolphins going into the final hole.

But on 18, the Cats collapsed.

“I didn’t really know where we were standing,” Lumsden said. “I knew it was close on 18, and then I hit it in a bush and that didn’t go down well at all.”

After Lumsden’s drive out of bounds, NU still had a chance to win it in regulation, but Hawkins three-putted the last hole, giving Jacksonville a chance in the playoff.

On the first hole of the sudden death playoff, two Dolphins hit into the water, but both recovered to make bogey. Again the Cats couldn’t capitalize, and the teams moved to the second sudden-death playoff hole.

This time, however, Jacksonville took advantage of an errant drive. Wu, who has been the top player for NU all season and who Inglis said should get All-American recognition, hit his tee shot into the water. Lumsden and Hawkins both needed to make their birdie putts, but Hawkins missed and Inglis pulled his team off the course, knowing their season was over.

“There’s a lot of encouraging things; it’s just none of that really comforts us at this point in time because we all so badly wanted to come back to Chicago and play for an NCAA championship, and to not be able to do that is a bitter pill to swallow,” Inglis said.

It’s been a season of close defeats for the Cats, who consistently finished in near the top of the leaderboard all year year but never managed to get atop the podium. The story was the same on Wednesday.

Graduate student Conor Richardson, who transferred to NU from Florida for his final year of eligibility, said he had no regrets from his collegiate career.

“I didn’t really go into it wanting it to be my last college event,” he said. “I didn’t wake up this morning thinking it’d be my last round, but every career in college has to come to an end. It’s a tough way to go out, but it’s been a good run.”