The Daily Northwestern • May 18, 2017 • https://dailynorthwestern.com/2017/05/18/sports/baseball-with-big-ten-tournament-spot-uncertain-northwestern-prepares-for-final-series-against-rutgers/ 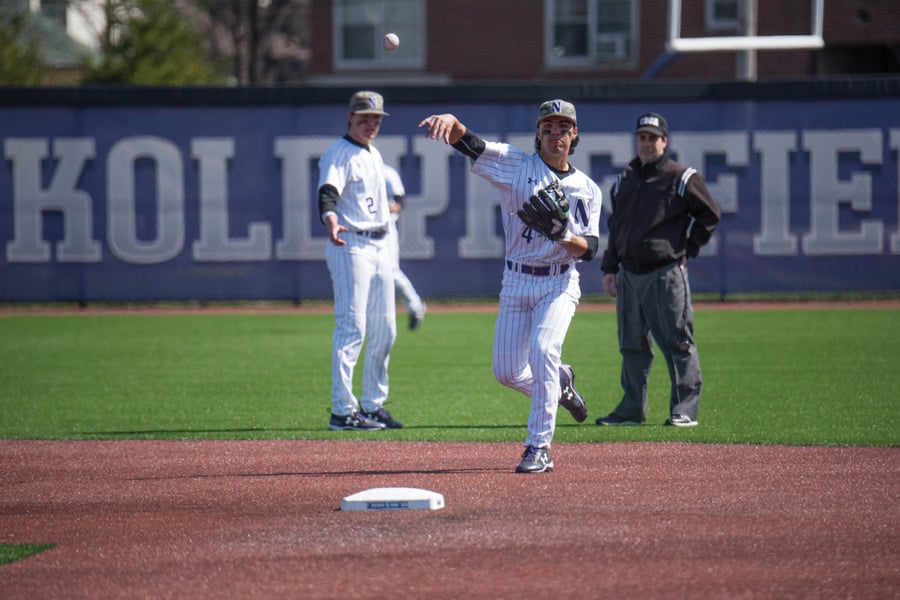 Alex Erro fires the ball across the infielder. The freshman infielder and the Wildcats can lock up a spot in the Big Ten Tournament with a strong series this weekend against Rutgers.

After leaving Maryland with two crucial wins last weekend, Northwestern can breathe a little easier entering their final regular season series against Rutgers. That doesn’t mean, however, that the Wildcats can coast to one of the final spots in the Big Ten tournament.

NU (21-28, 10-11 Big Ten) is trailed closely by Michigan State, which is just one game back in the conference standings, an ordering that could change with both teams’ final series.

“We have the opportunity to be in the tournament, but now we have to go play 27 innings of baseball,” coach Spencer Allen said. “So that’s how we’re going to get it done, not big picture.”

Statistically, Rutgers (19-31, 7-13) should offer the Cats little challenge compared the Terrapins, a Big Ten power. However, inconsistency and surprising results have defined NU this season.

Freshman infielder Alex Erro said the team is very different now than it was at the beginning of the season.

“I would say ever since Iowa we started playing a different brand of baseball,” Erro said. “Going into every series we’ve been pretty confident that we’re going to come out with victories, and we’ve just been executing and playing good baseball and we’re looking good now.”

Since the Iowa series, NU has won 13 of 21 games, including seven victories against Big Ten opponents.

Though Allen said the recent Maryland wins will certainly provide confidence for the team moving forward, that alone won’t lead to wins in the upcoming series.

“I think the biggest thing is knowing that we don’t get any runs from the Maryland game — it starts 0-0,” Allen said. “Rutgers is a very good team, a very good offensive team so we have to use the confidence but we have to go play better than them and each day come out.”

NU’s relentless offense shined particularly in the second game of the series, in which the Cats outscored Maryland 11-3, but the Cats defense will likely also need to be strong against the Scarlet Knights.

However, the bullpen has largely reflected the team’s success at the plate with several solid performances on the mound. A major contributor to that has been freshman pitcher Hank Christie, who allowed just six hits and one walk in his 8 innings against the Terrapins.

“Last week, coach told us especially that free bases were going to kill us, so I was focusing more on throwing strikes, getting strikeouts and getting the team deeper into the game, rather than just 5 innings or so,” Christie said.

Though Christie said it’s difficult to ignore the tournament implications of the end-of-season games, the team has tried to treat it the same as all of the others.

As for preparation for the final series, Allen says the seniors have been key in making sure everything stays the same, something he says New York Yankees manager Joe Girardi — who played his college ball at NU — urged the Cats to focus on during his visit in early May.

“I think the guys have done a great job, that’s where your senior leaders help out. As coaches, honestly I’m just trying to do less and make sure that you don’t get in the way of each guy’s preparation,” Allen said. “We want to make sure we are prepared for how Rutgers is going to play, but otherwise it’s just stay out of the way and hopefully enjoy it.”