The Daily Northwestern • May 18, 2017 • https://dailynorthwestern.com/2017/05/18/city/robert-crown-center-plans-go-through-second-round-of-discussion/

Robert Crown Center plans go through second round of discussion 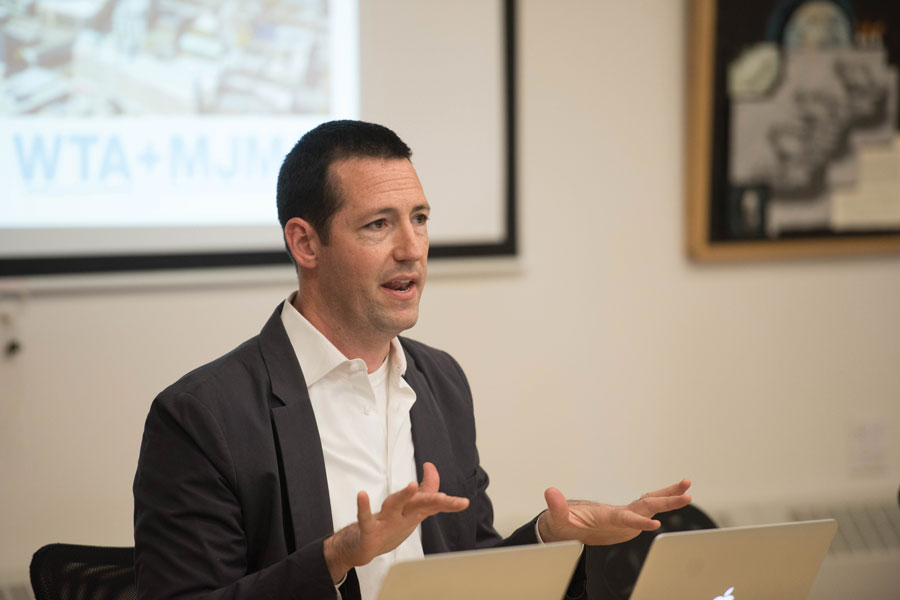 Andy Tinucci of Woodhouse Tinucci Architects presents design plans for the new Robert Crown Community Center at a meeting Thursday. Construction for the new center is slated to begin next spring.

Plans for the new Robert Crown Community Center went through a second round of discussions during a Thursday night meeting, which brought up issues of parking, green space and sustainability.

Architects with Woodhouse Tinucci Architects, a Chicago-based firm, presented 12 schematics for outdoor and indoor space at the new center to a group of more than 40 Evanston residents who gathered at the Lorraine H. Morton Civic Center. The goal of the meeting was to narrow down a direction for the center’s plans, Andy Tinucci of Woodhouse Tinucci said.

“It’s essential we have these discussions because as designs develop, considerations change,” Tinucci said. “Our plans already took a lot more form after hearing back from the community during our last discussion, and we will make changes with these considerations again.”

The city shifted the Robert Crown project from renovation to replacement in January, a project that is estimated to cost $30 million, assistant city manager Marty Lyons said. However, the city won’t know exact costs until the construction designs are finished, which will likely happen in fall, he said.

“The cost of the new center isn’t nailed down yet,” Lyons said. “It depends on what materials we use, and the specifics of the building that will be decided in the next phase of design.”

So far, the city has secured more than $7.6 million in donations for the new building, in addition to a city contribution of $12.5 million in bond financing.

Northwestern pledged $1 million to the Robert Crown renovations in February.

Currently, plans for the outdoor space include two full-length turf soccer fields, expanded parking spaces and tennis courts. The building will include a preschool, athletic center, two ice rinks and a library branch.

Some residents at Thursday’s meeting expressed concerns about the changing character of the center. Right now, the Robert Crown area is largely undeveloped green space with a small building, nearby resident Tom O’Brien said, but will see much higher use with the new athletic facilities.

“I get that soccer guys and hockey guys raised a lot of money for this, but it’s not going to be what it used to be,” O’Brien said. “It’s going to be a great facility, but it’ll be very different.”

O’Brien and his neighbor, Charles West — a resident who lives a half block away from Robert Crown — came to previous meetings to make sure existing tennis courts remain in place, a feature not included in the original schematics. Looking at how neighbors of the park use the area right now is important to consider, West said.

West also said even with plans to expand parking, the streets surrounding the center will likely see even heavier traffic and street parking.

“It’s going to be a traffic nightmare,” West said.

Designers will return for another community feedback meeting in July before presenting a final design to City Council. Officials said construction is slated to start next spring, with hopes to finish in 2019.

“This is the kind of project that only comes up once every 40 years,” Lyons said. “If it takes a year, it’s fine.”