The Daily Northwestern • May 18, 2017 • https://dailynorthwestern.com/2017/05/18/campus/students-react-following-rasmea-odehs-talk-on-campus/ 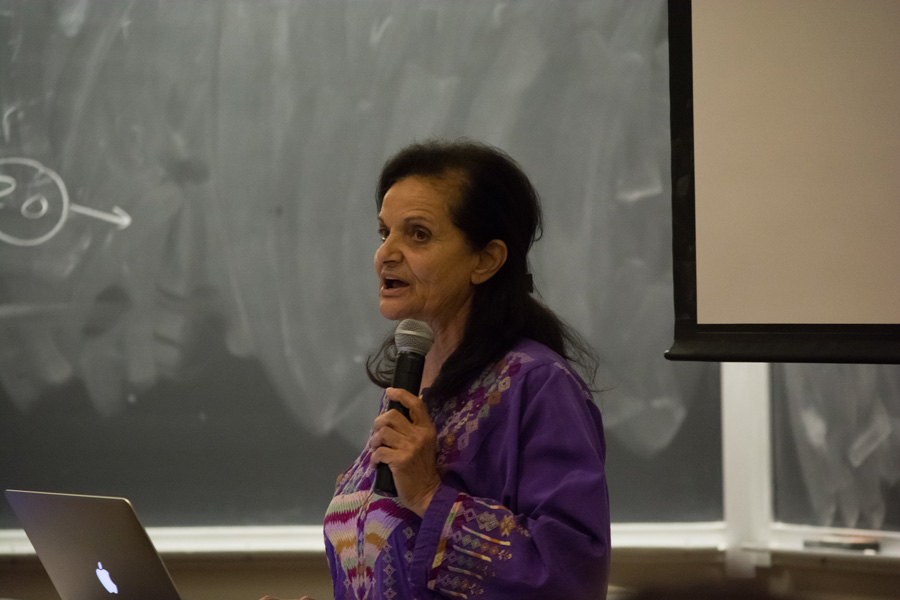 Rasmea Odeh speaks during an event held by Students for Justice in Palestine on Monday. Students expressed varied reactions to her speaking on campus.

Reactions to Rasmea Odeh, who spoke at Northwestern on Monday, varied across campus as some said they felt uncomfortable by the presence of someone who was convicted for terrorism, and others welcomed her as a human rights activist who they say was wrongfully convicted.

More than 120 people dressed in all black lined both sides of the entrance to Technological Institute on Monday half an hour before Odeh was scheduled to speak at an event hosted by Students for Justice in Palestine.

Holding white candles, photos and memorial posters, attendees — including University President Morton Schapiro— participated in a silent vigil to mourn Edward Joffe and Leon Kanner, two students who were killed in a 1969 bombing attack in Israel. Odeh was convicted by the Israeli government for participating in these bombings.

The vigil was organized by students from Fiedler Hillel, Wildcats for Israel and J Street U. The purpose was to provide an “alternative space” for those who felt uncomfortable by Odeh’s presence on campus, Hillel president Samantha Max said. The vigil was not meant to prevent anyone from attending SJP’s event or shut down the event, the Medill junior said.

“We just felt that it was incredibly important to respect freedom of speech and to really respect SJP’s right to bring this speaker to campus,” Max said. “We just wanted to offer this alternative space because we knew that some students and members of the community would be really uncomfortable by the fact that a woman with this history was coming to campus.”

Wildcats for Israel president Jake Stein, who helped organize the vigil, said he was contacted by students who were “genuinely scared.” The SESP freshman said it was “incredibly powerful” to see so many different people from a variety of organizations come together for the event.

“We were able to bring together groups that a lot of the times don’t host programming together because we all recognized the humanity of the victims of Rasmea Odeh,” Stein said. “We all recognize how disturbing it is to have a convicted terrorist on our campus.”

SJP invited Odeh as part of its Israeli Apartheid Week. According to articles in The Jerusalem Post and Haaretz, two Israeli newspapers, Odeh said she was convicted after being tortured into making a false confession. According to Haaretz, her lawyers said she was also sexually assaulted. Odeh’s experience with torture is not specific to her, but is “very systemic” in the Israeli justice system, SJP president Marcel Hanna said.

According to Haaretz, methods of torture include slapping, forcing prisoners into stress positions for long periods of time and screaming in prisoners’ ears. In 2014, there were more than 50 complaints of torture ranging from sleep deprivation to tying suspects in “frog” or “banana” positions, Haaretz also reported.

According to another article in The Jerusalem Post, Odeh was tried in an Israeli military court. These courts, which handle criminal and security cases involving Palestinians, have a conviction rate of more than 99 percent, according to an article in Haaretz.

Hanna said SJP wanted to host an event with Odeh “to honor the amazing work she has done” and how she’s advocated for “the Palestinian struggle for liberation.” SJP members, he said, “unequivocally support” Odeh.

Odeh is the associate director of the Arab American Action Network, a Chicago-based community organization, Hanna said. She also created the Arab Women’s Committee, which trains women in activism and social organizing as well as educates them about immigrant rights and civil liberties, Hanna said.

“She’s a very well-respected organizer in Chicago and the world,” he said. “Especially in Chicago, she’s a very beloved community member.”

In response to the vigil, Hanna said he felt it was intimidating for people to walk into Tech under the “gaze” of the vigil attendees. He said attendees at vigils he has seen in the past have gathered in circles.

Multiple students said there was no communication between SJP and the vigil organizers prior to Odeh’s talk.

Stein said student organizers did not have enough time to contact SJP, as they found out about Odeh coming to campus over the weekend.

“We found out on very short notice and we had very little time to plan this vigil, so all of our efforts were focused on the vigil,” he said.

Max said she understood how people attending the SJP event may have felt uncomfortable because of the vigil attendees. The attendees were silent and didn’t have any large picket signs in an effort to be “as respectable as possible,” she said.

The vigil attendees chose to line up on both sides of the building’s entrance rather than gather in front because it was the “best way we would be present without being an obstruction,” Max said. If the attendees had formed a circle, Max said it would have been difficult for people to get past the vigil and into the building.

First-year Ph.D. student Isaac Miller, who is Jewish and a member of SJP, said it was “disturbing” that the vigil was held on Nakba Day, which commemorates the fleeing and expulsion of more than 750,000 Palestinians following the creation of the state of Israel.

“To have a vigil that doesn’t acknowledge the expulsion of over 700,000 Palestinians is not a safe space for all students and, in fact, is condoning Israel’s violence and occupation,” said Miller, who is also a member of Jewish Voice for Peace, a national organization that supports the Boycott, Divestment and Sanctions movement.

If vigil organizers cared about “the sanctity of life,” Hanna said, then they should have hosted a vigil to mourn the lives of Palestinian victims. Hanna said vigil organizers’ lack of doing so “shows that their mourning has a political agenda.”

“Their selective outrage is very telling of whose lives matter to them and whose lives don’t,” Hanna said.

The vigil was not held to counteract Nakba Day, but had to be held Monday because that was when Odeh spoke, Stein said. The timing of the event gave organizers “no choice,” he said.

Stein added his organization, Wildcats for Israel, did not see it as their role to plan a vigil for Palestinian victims because they are “not the leader of the Palestinian narrative on campus.” However, he said the organization “would not be opposed” to any vigil that mourned Palestinian lives or lives of anyone taken in any conflict.

The vigil was not held to make a pro-Israel statement, and organizers made sure not to mention Israel in any way during the event, Max said. Choosing to mourn the deaths of the two students before SJP’s event was not in response to Odeh’s beliefs, she said.

“The reason we had a problem is because she’s been convicted of terrorist action that resulted in the death of two people,” she said. “We weren’t going to protest anything she might say about her political beliefs. We were just speaking out against a violent act that she has been convicted of being a part of.”

Max said she wants to continue to try to build relationships between different campus organizations. She said she hopes student groups from both sides of the conflict can work together to have dialogue and develop programming that presents multiple sides of the story.

Since becoming president of SJP two years ago, Hanna said none of the students in the three groups that organized Monday’s vigil reached out to him to talk or discuss joint programming.

Max said she is aware of the lack of communication between SJP and Hillel.

“We often are wary to reach out to SJP because we assume they won’t want to talk, but I think that’s something that needs to change,” she said. “I would rather send a million emails, texts and Facebook messages trying to set up a meeting and if we get turned down or we don’t hear back that’s fine, but this is a relationship that’s really important to me that I would love to build.”

Before dialogue can happen, Hanna said, there needs to be an understanding of the power dynamics that are in place. Dialogue between sides cannot occur until they are both on equal ground, he said.

For that to happen, Hanna said the organizations cannot continue to “advocate for and celebrate” the oppression of Palestinians.

“Until that occurs and until there is an equal power dynamic, any sort of conversation will not be a dialogue, but it will be a reinforcement of existing power structures,” he said.

Both Stein and Max said they have encouraged members of their organizations to attend SJP programming to learn more about the group’s narrative.

Stein said he is “extremely interested” in an initiative that would bring Wildcats for Israel and SJP together.

This story was updated to clarify that The Jerusalem Post and Haaretz reported that Odeh said she was tortured into making a false confession.