The Daily Northwestern • May 18, 2017 • https://dailynorthwestern.com/2017/05/18/campus/documentary-filmmaker-rebecca-pierce-discusses-anti-black-racism-in-israel-during-sjp-event/ 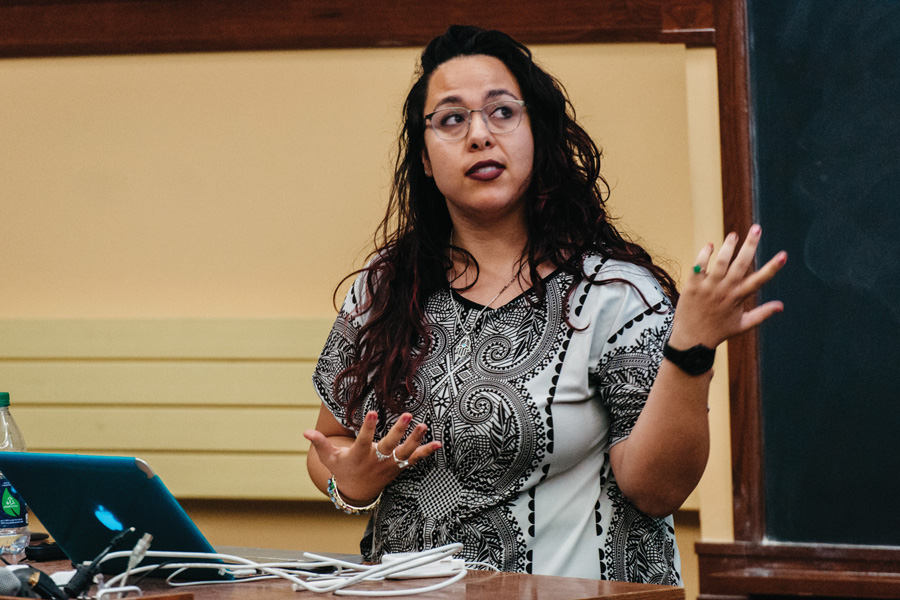 Documentary filmmaker Rebecca Pierce discusses anti-black racism in Israel at an event hosted by Students for Justice in Palestine. The event was part of Israel Apartheid Week.

Documentary maker Rebecca Pierce discussed the impacts and manifestations of anti-black racism in Israel and how it affects Palestinians during an event Wednesday evening.

The event, titled “A Lens on Injustice” and hosted by Students for Justice in Palestine in Harris Hall, featured segments of Pierce’s work interwoven in her talk on anti-black racism and police brutality in Israel, and how they tie into the Palestinian conflict. Roughly 25 people attended the event, which was co-sponsored by The Buffett Institute for Global Studies, African American studies department, the Africa Seminar and the Ethnic Studies Graduate Colloquium.

Pierce is an African American Jewish filmmaker, journalist and activist based out of the San Francisco area. Her work focuses predominantly on racial issues in the United States, the Palestinian territories and Israel, and she also is a core member of the Jews of Color and Sephardi/Mizrahi Caucus organized in partnership with Jewish Voice for Peace.

The event was held as part of SJP’s Israel Apartheid Week, which aims to showcase the Palestinian and other marginalized narratives, said Weinberg senior Marcel Hanna, SJP president.

Hanna said the week comes on the anniversary of the Nakba, which Palestinians remember as the mass expulsion and exodus of Palestinians from their homes in 1948 during the declaration of the modern state of Israel. Nakba Day, observed on May 15, follows what Israelis observe as their independence day, first held on May 14, 1948.

“The point of this (week) is to showcase the Palestinian narrative on campus, the narrative of dispossession and resistance and struggle for freedom,” Hanna said.

During the talk, Pierce spoke about Zionism and Israel’s beginnings, saying they were formed by white, Ashkenazi Jews in Europe in response to European nationalism, largely excluding other Jews.

“Jews of color are often completely left out of the conversation,” she said. “This is so bad that a lot of Americans don’t even know Jews of color is a thing.”

Pierce discussed the histories and current situations of several communities of color in Israel, including Mizrahi Jews, who are Arab Jews who immigrated to Israel; Ethiopian Jews; and non-Jewish refugees from sub-saharan African countries like Sudan and Eritrea.

Using the terms “brown washing” and “black washing,” Pierce said the state of Israel often showcases people of color living in Israel to absolve itself of racism. The reality, she said, is that these people are largely discriminated against in Israeli society.

“Often (Jews of color) are used as symbols of Israeli diversity, and they’re used to cover up abuses against Palestinians,” Pierce said. “In the process of this, our stories are erased, and so are our own histories of oppression when it comes to Israel.”

Pierce said communities of color in Israel have faced systemic discrimination throughout the country’s history. She said higher numbers of black and Mizrahi Jews serve in combat units of the military, as military service is required for citizenship and upward mobility. Pierce said black and Mizrahi Jews often are subject to worse treatment in the military and are commonly used as foot soldiers in Palestinian occupation, which she said forces them to partake in the oppression of others.

Throughout the talk, Pierce played clips from documentaries she has worked on, including clips featuring Ethiopian refuseniks, who said they refused to serve in the military after being denied civil rights and being themselves victims of military brutality.

“Within the Jewish community is this question of, should we have a Jewish state or shouldn’t we?” Pierce said. “There also needs to be discussion of what kind of Jewish state is Israel, and right now, it’s a white supremacist one.”

Fifth-year McCormick student Kareem Youssef, who attended the event, said he enjoyed hearing Pierce’s perspective and learned a lot about the less-discussed aspects of racial politics in Israel.

“I applaud individuals like Rebecca Pierce who did this event, as well as Jewish Voice for Peace … who won’t hesitate to stand with Palestinians and talk about these issues,” Youssef said. “The hope is bringing this to light can expand upon the need for intersectional activism and alliances and solidarity.”