The Daily Northwestern • May 16, 2017 • https://dailynorthwestern.com/2017/05/16/campus/music-astronomy-collide-at-multimedia-bienen-performance/ 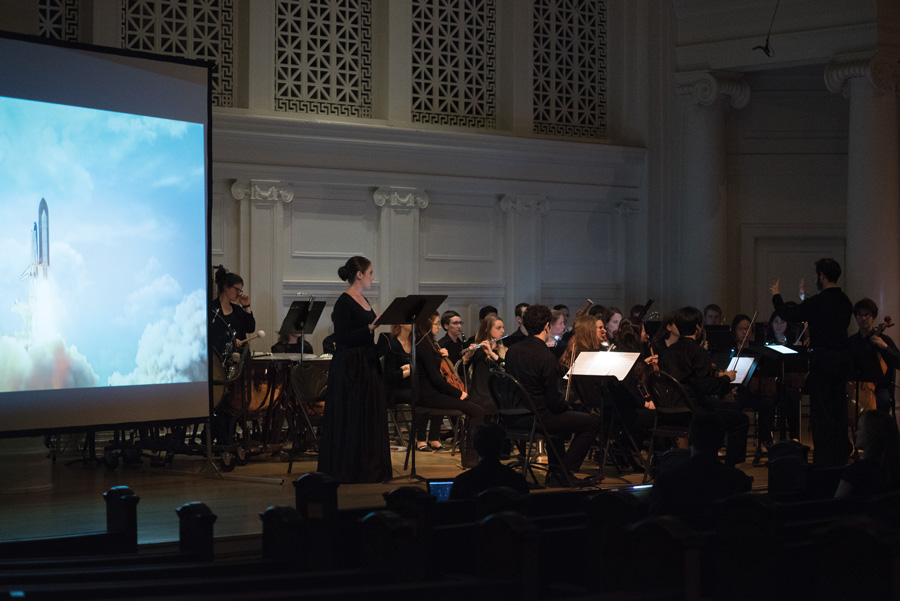 Members of a Bienen orchestra perform “A Shout Across Time” in Nichols Concert Hall on Monday. The event merged science and music with the goal of exciting people about astronomy.

Second-year graduate student Kyle Kremer (Bienen, Weinberg ‘12) said he finds all the inspiration he needs in the sky.

Kremer helped bring his inspiration to an audience of more than 100 people to combine music and astronomy in a multimedia performance called “A Shout Across Time” at Nichols Concert Hall on Monday.

The event was part of Kremer’s Cosmos in Concert initiative, which aims to educate and excite the public about astronomy through live classical music and public outreach events.

Kremer said a large part of his motivation comes from the reactions he sees from community members. Wonder is inherent to his science, he said.

“We’re lucky as astronomers,” Kremer said. “It’s one of the most awe-inspiring of all the sciences, so people already love it. It’s not very hard to get people excited.”

At the event, Bienen students performed two works: “Eclipse” and the title piece “A Shout Across Time.” Each arrangement celebrated a different event in modern astronomy, Kremer said.

“Eclipse,” arranged by Kremer and performed by Bienen quintet Lake Shore Brass, honors the upcoming solar eclipse on Aug. 21, he said. The piece was broken into themes covering the sun, moon and Earth. Kremer encouraged the audience to observe the eclipse because a total solar eclipse of this breadth has not been seen since 1918.

Evanston resident Lynn Clark said she left the performance wanting more. She particularly enjoyed the vivid imagery and how it related to the music to make a unified work of art, she said.

“This was fantastic,” Clark said. “I just never expected to have such a holistic experience; it was wonderful … There need to be more performances.”

“A Shout Across Time” was intended as a celebration of Albert Einstein to commemorate the centennial of his theory of general relativity, which was confirmed last year with the detection of gravitational waves. The piece was composed by Ira Mowitz and originally performed at Montana State University.

The performance traced the universe, or “the beautiful mystery that inspired Einstein,” to the discovery of gravitational waves caused by the merging of black holes.

Toward the end of “A Shout Across Time,” the audience heard a simulated black hole collision. Evanston resident Bob Lounsbury said he enjoyed the opportunity to hear this particular effect.

“I was trying to listen a few months ago to the sound of the black holes colliding, and now I have a better sense of what was going on,” he said. “I probably need to see this several more times to really get it, though.”

Communication junior Noah LaPook, a Dearborn Observatory host and artist, said he feels inspired by the intersection of science and art.

LaPook said he liked that the performance reinforced the message that there is music in the universe.

“There’s something in thinking about the universe that is so baffling that there often aren’t the words,” LaPook said. “The music made me feel something that I can’t verbalize when I look at the sky.”