The Daily Northwestern • May 16, 2017 • https://dailynorthwestern.com/2017/05/16/campus/illinois-teacher-of-the-year-speaks-about-education-inspiring-future-leaders/ 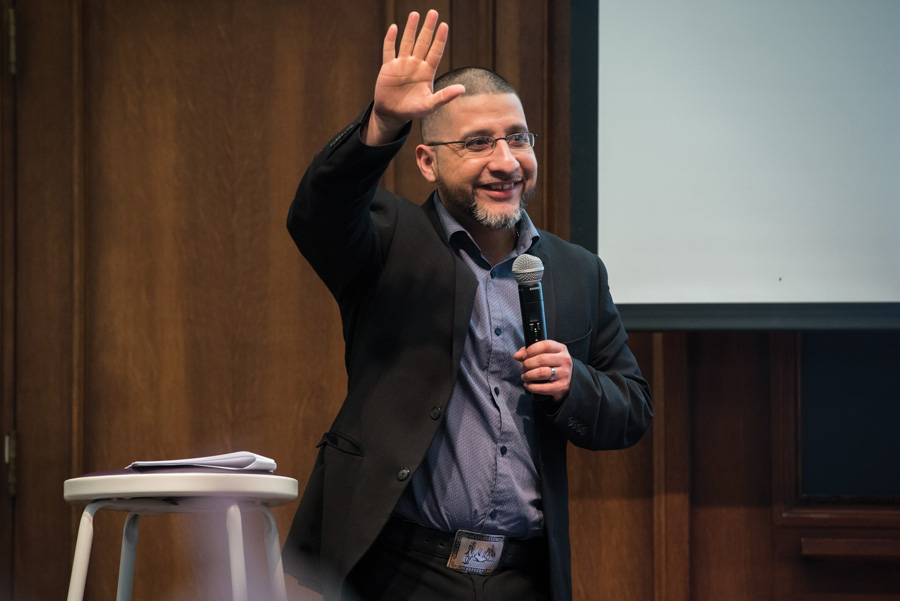 2017 Illinois Teacher of the Year Ricardo Castro speaks in Harris Hall during a SESP event on Monday. Castro discussed his view on education and the importance of teaching students to be leaders.

Ricardo Castro, the 2017 Illinois Teacher of the Year, emphasized the importance of having the “right narrative” toward education at an event Monday.

“It’s very important that we understand our worldview towards education,” Castro said. “If you have the wrong narrative a lot of people run away from education in the first five years; other people may stay within education and become bitter and resentful.”

Castro, an English as a Second Language teacher at Elk Grove High School, spoke to about 30 people in Harris Hall at an event hosted by the School of Education and Social Policy. SESP Prof. Timothy Dohrer, director of the master of science in education program, said he hopes this will be the “first of many years” of bringing the Illinois Teacher of the Year to campus.

During the event, Castro discussed his experiences as an educator. Having strong convictions and a worldview that benefits education is crucial to being a successful teacher, he said. The impact teachers can have goes beyond what happens in the classroom, Castro said.

“It’s much more than just teaching,” he said. “We are fighting for democracy in our society. We are the frontline when parenting and communities have failed … We understand that it’s going to be hard, but it is a cause that’s bigger than us and that’s why it’s worthy of our sacrifice.”

Dohrer said the State Teacher of the Year program is a “remarkable” and selective process with recipients of the award going on to become leaders in education. Castro recently met with education secretary Betsy DeVos to discuss education policy, Dohrer said.

“What’s really cool about this organization is that they don’t just sort of give an honor,” Dohrer said. “They actually engage these great teachers to become leaders and to enact change in their state but also in the country … Ricky has certainly taken that up with a lot of passion that I’m pretty blown away by.”

Growing up in Chicago, Castro said his “narrative” led him to believe he could gain power and acceptance through gangs. When he moved to the suburbs, he said he wanted to change his life, making an effort to join sports and take honors classes.

Throughout this transition, Castro said he had teachers who supported him and wanted to see him succeed. These role models ultimately inspired him to pursue teaching, Castro said.

“I had teachers that were willing to sacrifice their time, comfort and resources in order to instill in me the values that guide my life today,” Castro said. “They were fighting for democracy as they fought to invest in my life.”

Castro’s teaching is not limited to coursework, nor does it focus on achieving socioeconomic success in adulthood, he said. Castro said he believes in teaching students how to engage with their communities and become leaders. He created “Estudiantes Unidos,” a leadership program that allows Elk Grove High School students to mentor junior high and elementary school students, according to a news release.

“His philosophy of education is very much centered on what narrative you have and to be able to see what narratives students have and to be intentionally aware of that,” Park said. “He is just a very nurturing figure in terms of taking initiatives for the community to rise and take action … (and) to empower positive learning.”