The Daily Northwestern • May 16, 2017 • https://dailynorthwestern.com/2017/05/16/campus/comedians-chris-gethard-aparna-nancherla-discuss-politics-mental-health/ 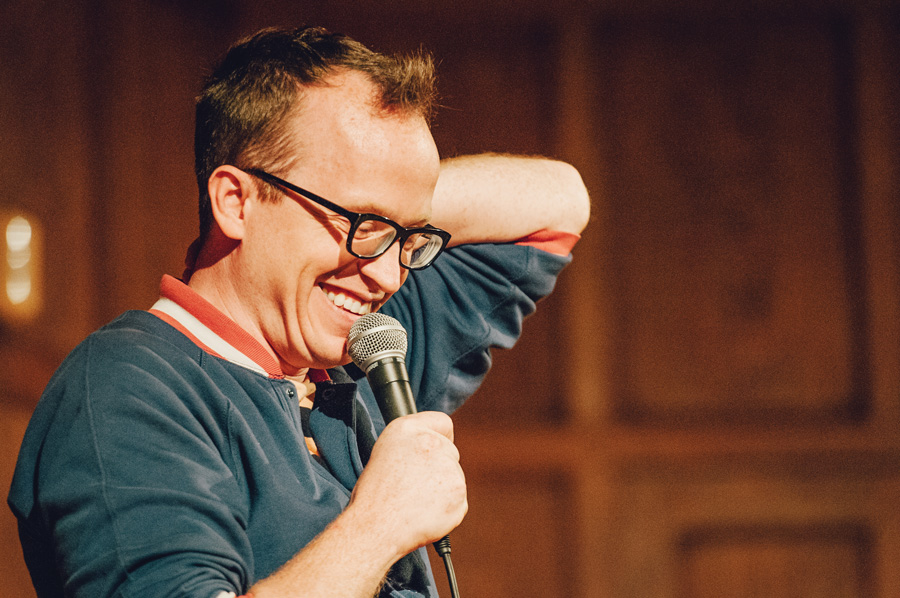 When comedian Chris Gethard took the stage in Lutkin Hall on Monday in front of more than 250 people, he noted the presence of the organ.

“One of the things I do demand is that I only perform in rooms with massive organs,” Gethard said.

Gethard, who has appeared on NBC’s “Parks and Recreation” and “The Office,” was one of many acts that comprised a night of improvisation and stand-up comedy co-hosted by A&O Productions and the South Asian Students Alliance. Audience members also enjoyed performances from Northwestern student comedy group Mee-Ow, Communication sophomore Grace Dowling and comedian Aparna Nancherla, who has written for “Late Night with Seth Meyers.”

The goal of the “experimental” event was to reach a different audience, A&O director of speakers Maddie Thomas told The Daily.

Though people at NU “might not be familiar” with Nancherla and Gethard, the Communication senior told The Daily they performed “high quality comedy.” Additionally, A&O wanted to bring student performers to compliment the comedians, she said.

“We think that the comedy theater at Northwestern is really unique and excellent,” Thomas said. “We wanted to bring in talented peers at the school that we really respect and admire.”

During the show, both Gethard and Nancherla worked discussions about politics and mental health into their performances.

Gethard spoke about the divisiveness in current political discourse and offered solutions to “promote healing.” He said people from the northern half of the U.S. should stop judging people from the South “based on the people we meet in Waffle House.”

Nancherla said she has become more politically active since President Donald Trump’s election. She participated in the Women’s March Los Angeles, which she said was a “great day for Fitbits.”

Additionally, Nancherla joked about a change in the nature of her therapy sessions as a result of the current political climate.

“You kind of know you’re living in a grim time when you go to therapy and your therapist is like, ‘you want to go first or should I?’” she said.

SASA co-president Keya Amin told The Daily the organization invited Nancherla because the comedian’s upbringing is similar to many South Asian students. Amin said Nancherla’s ability to make jokes about mental health is important because it opens up the opportunity for dialogue about the issue within the South Asian community on campus.

Bienen senior Myrtil Mitanga told The Daily she appreciated the jokes about mental health because they opened up a dialogue.

“It’s nice to have that being more part of public discourse and that there’s a platform for it,” Mitanga said.