The Daily Northwestern • May 14, 2017 • https://dailynorthwestern.com/2017/05/14/sports/lacrosse-wildcats-fall-in-second-round-of-ncaa-tournament/

Lacrosse: Wildcats fall in second round of NCAA Tournament 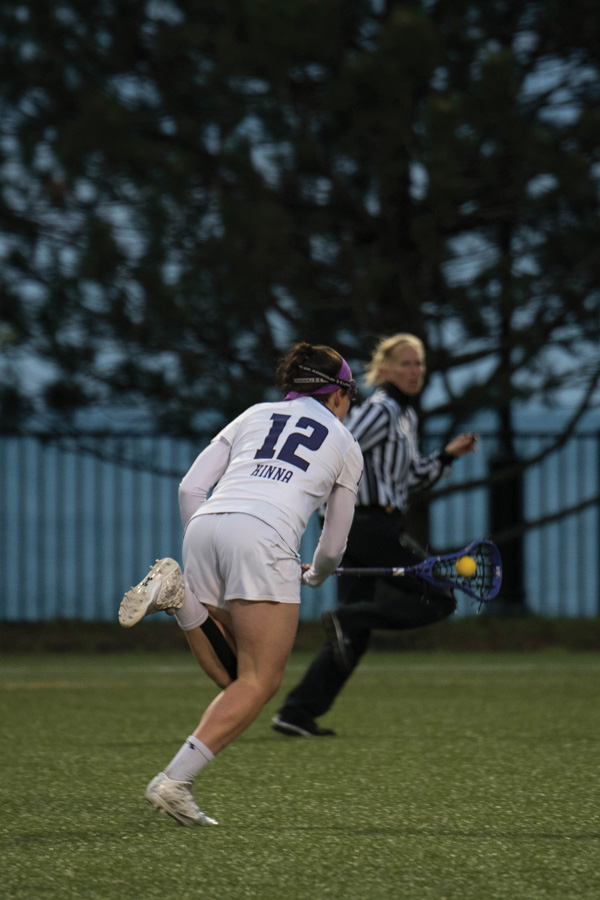 Megan Kinna stumbles forward. The freshman midfielder and the Wildcats crashed out of the NCAA Tournament against Stony Brook on Sunday.

For the second year in a row, the Wildcats are going home early. After rolling past Albany in the first round of the NCAA Tournament, Northwestern couldn’t stave off Stony Brook on Sunday to advance to the quarterfinals.

Following a 15-7 trouncing of the Great Danes (12-6) on Friday, the Cats (11-10, 4-2 Big Ten) came up short in the second round, falling 13-9 to the No. 8-seed Seawolves (20-1). Despite a 9-goal weekend from senior attacker Danita Stroup, NU failed to advance to the tournament quarterfinals for the second-straight season.

The Cats came into the tournament with an aggressiveness on offense that the team hadn’t played with during the regular season. Coach Kelly Amonte Hiller pushed defender Claire Quinn to midfield and moved junior attacker Nicole Beardsley up in the rotation to give the offense two extra left handers.

“It definitely made a difference for us,” Amonte Hiller said. “Having those guys, having a little more depth there, it definitely helps especially with having lefties in Claire and Nicole.”

Quinn was the difference maker, as she tallied 4 goals against Albany and added another against Stony Brook to more than double her career goal total. But Quinn wasn’t alone in the goal scoring escapades, as Stroup scored 6 goals against the Great Danes and recorded a hat trick in 15 minutes against the Seawolves.

Stroup and Quinn combined for 5 goals in the first half against Albany, carrying the team to a 8-3 halftime lead. NU’s defense thwarted the Great Danes’ shooters, holding the high-scoring offense to just 12 shots on goal. The Cats didn’t let up in the second half, finishing with 30 shots in the game and putting 20 of them on goal.

“It’s nice because we did play a full 60 minutes, but that doesn’t mean anything for Sunday,” Amonte Hiller said after Friday’s win. “We don’t think things are just going to happen — we have to make them happen on Sunday.”

After conceding a goal just seven seconds into the game, the Cats rebounded quickly, picking up goals from Stroup and Quinn to give the team the 2-1 lead. NU later secured a 5-3 advantage, but the Seawolves didn’t roll over, scoring 3 unanswered goals in just under five minutes to reclaim the lead for the hosts.

The Cats couldn’t seem to gain possession in the second half as junior attacker Shelby Fredericks had difficulty from the draw circle. Fredericks, who is third in the country in draw controls per game, only came up with five on the day against midfielder Keri McCarthy.

“She was just doing it a little different than anyone I had gone against,” Fredericks said. “She had her butt-end really far out, so she had a lot of leverage, so I was just trying to adjust to that and also just trying to keep it close and limit the 50-50 balls.”

Stony Brook came out hot in the second half, outscoring NU 6-2 in the first 18 minutes after the break. Senior attacker Christina Esposito scored her first goal of the weekend with 10:35 left in regulation, the last goal the team would score all season.

Esposito, who entered the tournament as the Cats’ leading scorer, struggled to find the back of the net this weekend. Still, she said her five years at NU have taught her invaluable lessons.

“I’ve just learned how to pick yourself up whenever you get knocked down,” Esposito said. “It’s a very hard program, Northwestern, so playing for them has taught me how to be a warrior in all aspects in life.”