The Daily Northwestern • May 14, 2017 • https://dailynorthwestern.com/2017/05/14/sports/baseball-underdog-wildcats-take-series-at-maryland-in-dramatic-fashion/ 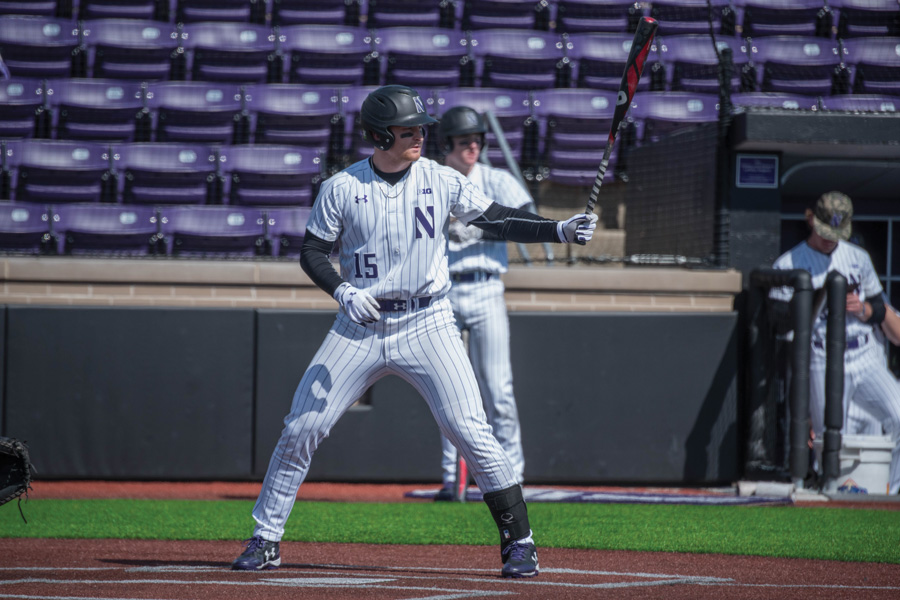 Connor Lind performs his pre-pitch routine. The junior infielder and the Wildcats took a surprising series win at Maryland this weekend.

Maryland was 19-1 at home and in second place in the Big Ten coming into the weekend, but that was before Northwestern came to town and took two of three from the Terrapins.

The Wildcats (21-28, 10-11 Big Ten) won the series with a thrilling 6-5 rubber match victory on Sunday. Freshman infielder Alex Erro homered in the top of the 11th and fellow freshman Josh Levy shut the Terrapins down in the bottom half of the inning to snag the win.

“It was a 3-1 count and he had some decent velocity, so I knew he was going to come with a fastball,” Erro said. “He decided to challenge me inside, and I just trusted my approach, put a good swing on it, and it all ended up real well.”

NU got crucial production from all parts of the lineup on the weekend en route to tallying 18 runs. The bottom four hitters in the Cats’ lineup combined for nine crucial RBIs on the weekend, with junior Connor Lind accounting for four of the nine.

Though freshman starter Hank Christie dominated on the mound Saturday, most of the more impressive work on the mound came from NU’s bullpen, which allowed only 2 earned runs across 9 total innings.

“I really just needed to attack the strike zone and let my defense work behind me,” Levy said. “The wind was blowing in, so anything up in the air wasn’t going to travel, and I knew that if I executed then good things would happen.”

The start of the series was not encouraging for the visitors, as Maryland’s Bryan Shaffer threw 8 innings of 1-run ball on Friday. The junior struck out eight batters while allowing only six hits and one walk.

At the plate for the Terrapins, shortstop Kevin Smith launched two homers en route to the 7-1 victory for the hosts.

“We were making them earn everything they got,” coach Spencer Allen said. “On Friday they got us, but the total team effort was the thing that carried us.”

Saturday’s game was almost the exact opposite, as Christie fired 8 innings for NU while giving up just 1 run and six hits.

The Maryland pitching staff melted down in the fifth inning, allowing 7 runs, including two on consecutive bases-loaded walks. Senior Joe Hoscheit led the Cats at the plate once again, going 3-for-5 in the 11-3 win.

“It was a different guy each day,” Allen said. “That was what we’ve preached, and it was fun to see it materialize this weekend.”

The thrilling final game opened as a pitcher’s duel, but Maryland’s 5-run fifth inning changed that rather quickly. NU, however, rallied and squared the game at five on Lind’s RBI double in the eighth inning.

Erro’s game-winning home run and the shutdown inning from Levy moved the Cats into seventh place in the Big Ten, and with only one series remaining, NU is poised to make the Big Ten Tournament for the first time since 2010.

“This is huge,” Levy said. “You ask anyone in the Big Ten, and no one thought we would be competitive with them at all this weekend, so to take two out of three on the road was huge.”