The Daily Northwestern • May 11, 2017 • https://dailynorthwestern.com/2017/05/11/sports/softball-wildcats-cruise-past-purdue-in-big-ten-tournaments-first-round/ 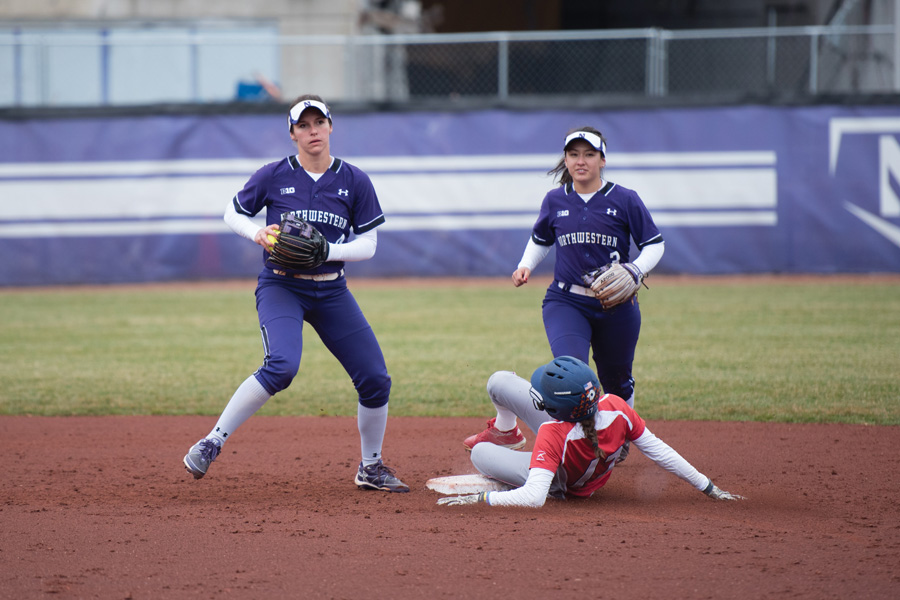 It’s not often that one inning of a softball game wholly determines its outcome.

But on Thursday morning in the first round of the Big Ten Tournament, No. 8 seed Northwestern scored all six of its own runs in an explosive first inning, leading to a 6-1 defeat of No. 9 seed Purdue.

After the Boilermakers (20-36, 9-14 Big Ten) took a 1-0 lead in the top of the first off a solo home run, the Wildcats (25-28, 10-13) responded by getting on base however necessary, squeezing singles between infielders and reaching on errors. A string of hits with runners in scoring position knocked in NU’s final five runs and broke the game open.

“I felt our team was a little sleepy that first inning,” coach Kate Drohan said on Big Ten Network. “Kaley was throwing a lot of pitches, she was getting strikeouts but then she gave up the home run, so I said, ‘Okay guys, let’s wake up’.”

Junior centerfielder Sabrina Rabin manufactured her own run to lead off the inning. She slapped a single up the middle, stole second and third on the same play and came in to score on junior shortstop Marissa Panko’s fielder’s choice.

In the circle, sophomore Kaley Winegarner took charge for the Cats. The Boilermakers’ lineup was no match for Winegarner, who went the distance, allowed only two hits and matched her career high with eight strikeouts.

Winegarner told BTN that the offense’s first-inning output helped her compose herself after a rocky start.

“It increases the confidence of me going out there,” she said. “All I want to do is keep the lead, and I know that my team’s behind me every step of the way.”

The outing gave Winegarner, who has emerged as the team’s clear ace in the season’s late going, three complete game wins in the Cats’ last four contests alone. She also surpassed the 100-inning mark and lowered her ERA to 2.85.

Drohan told BTN that Winegarner’s resilience and her command of her off-speed pitch made the difference.

“Her ability to throw the changeup on any count has been huge for us,” Drohan said. “I thought she pitched really tough today. I thought there were some innings where she didn’t have her best stuff, but she really battled through it.”

With the victory, NU advances to the second stage of the tournament and will face the No. 1 seed, Minnesota, on Friday. The Golden Gophers won the Big Ten regular season title with a 22-1 conference record and swept the Cats in a regular season series.