The Daily Northwestern • May 10, 2017 • https://dailynorthwestern.com/2017/05/10/sports/womens-golf-wildcats-qualify-for-national-championship-with-2nd-place-regional-finish/ 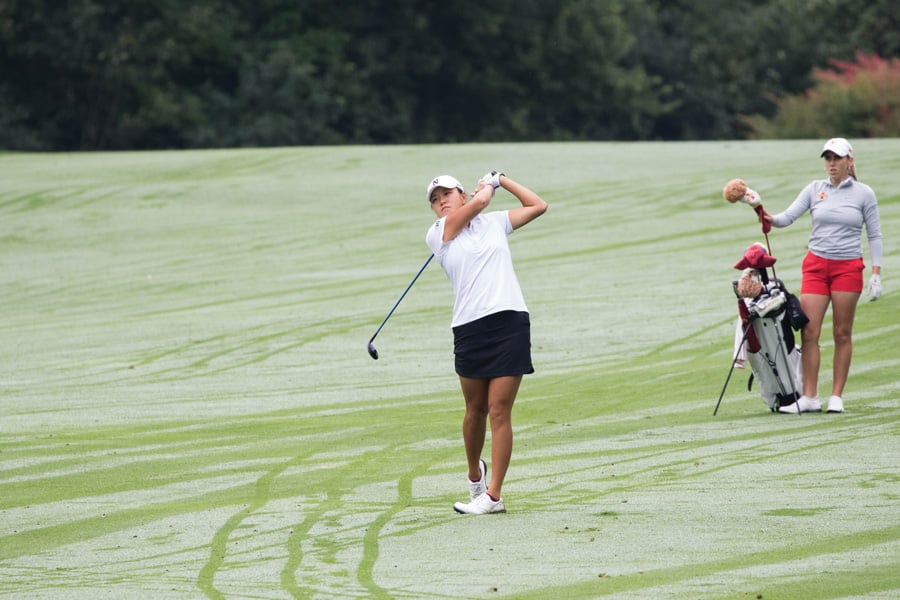 Hannah Kim takes a shot off the fairway. The junior tied for eighth overall at 1-under in the Athens Regional, helping Northwestern advance to the National Championship tournament as a team.

While Northwestern’s men’s basketball team just made its first NCAA Tournament, the women’s golf squad is back in its fifth straight National Championship tournament after finishing second in the NCAA Athens Regional.

After struggling in Tuesday’s second round, the Wildcats put up the lowest score of the day on Wednesday, finishing 5-under-par to move up three spots and ensure their spot in the finals.

“We just got some momentum today and never really relinquished that,” coach Emily Fletcher said. “The girls really came out with great energy and showed a great sense of resolve today. They just were determined that they were not going to be denied going to NCAAs.”

NU was led by junior Sarah Cho, who finished tied for 5th in the individual standings at 2-under after leading the Cats with a 4-under final round.

Cho was joined under par on the final round by fellow junior Hannah Kim and senior Kacie Komoto, who each finished in the top 15 among individuals.

“I was just trying to be very patient,” Cho said. “I was really present in every single shot. That was the key for me.”

After a solid first round, NU sat third overall, only four strokes back of No. 2 Alabama. On Tuesday, however, things fell apart for the Cats as they finished 7-over as a team to fall into a tie for fifth, just inside the top-six range needed to qualify for the National Championship.

The lineup struggled across the board, with no NU golfer finishing under par. Komoto, along with sophomores Stephanie Lau and Janet Mao, each finished at least three strokes over par.

“Regionals is the most intense time of the year,” Fletcher said. “Our girls knew we were right on the cuff, right on the cutline. We talked about coming out with good energy on Wednesday.”

Cho led the charge Wednesday with a bogey-free round, and Komoto put up the second-best score on the team with a 2-under round that featured five birdies.

Kim joined the group under par after birdying the final two holes of the day, and Lau finished the par-4 at 14th in two strokes Wednesday as part of her best round of the weekend at 2-over.

“All of us just kind of took a step back and regrouped,” Komoto said. “We kind of hit a reset button and went from there. We just left the past in the past and just looked forward. We played it shot by shot and hole by hole, and the result was great.”

On the final day, the Cats turned the tables on Big Ten rival Michigan State. The Spartans came back from an eight-stroke deficit on the final day of the Big Ten Championship to defeat NU, but Wednesday they were the ones who gave away a seven-stroke lead as the Cats finished eight strokes better on the final day.

Still, the Spartans finished the regional in 3rd place despite entering the tournament ranked outside the top 25, and NU will see its Big Ten counterparts for the third-straight time in the National Championship.

“They earned it, and they showed this week that they’re a championship caliber team,” Fletcher said. “I’m happy for them, and I’m encouraged to see five teams advance to NCAAs from the Big Ten conference. I think it’s a credit to the caliber of the programs in the Big Ten.”

If the Cats hope to take home that title, however, they’ll need better performances from their sophomores. Both Mao and Lau finished outside the top 60 on the weekend, and Lau’s 2-over final round was the lowest round either of them turned in on the weekend.

Part of that full team effort was seen this weekend, and Fletcher was encouraged by the possible foreshadowing from Wednesday’s performance.

“It wasn’t going to someone’s single effort that was going to get us through today,” Fletcher said. “It was going to take a team effort by all five players, and we certainly had that.”