The Daily Northwestern • May 10, 2017 • https://dailynorthwestern.com/2017/05/10/lateststories/northwestern-alums-renowned-play-stick-fly-to-premiere-on-campus/ 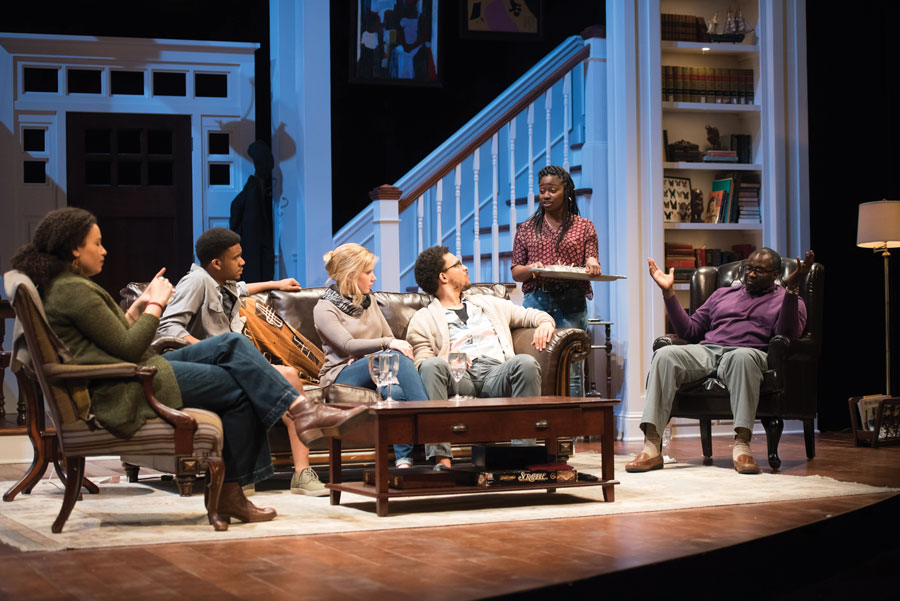 Students rehearse for an upcoming production of “Stick Fly.” The play will begin this Friday and will explore issues of race and privilege.

After a Broadway run in 2011, “Stick Fly” will premiere at Northwestern this weekend in Josephine Louis Theater.

Put on by The Virginia Wadsworth Wirtz Center for the Performing Arts, the show aims to capture the drama that occurs at the intersection of race, class and privilege. Written in 2008 by Lydia R. Diamond (Communication ’92), “Stick Fly” tells the story of the trials of an upper-class black family during a weekend in Martha’s Vineyard, said Ilesa Duncan, who directed the show.

Duncan, who serves as the artistic director for Pegasus Theatre Chicago, said the show tackles issues of race and social identity. The themes it presents are universal and are especially relevant in today’s social climate, she said.

“The message of this play is important for everyone,” she said. “It touches on a lot.”

The play centers on the tension that ensues when the family’s two sons bring their respective partners home to their parents. Through the uncovering of family secrets and long-ignored issues, the weekend forces the family to address their place in society, according to a news release.

The play, which will be performed on campus, features actors and production from Northwestern students, as well as seasoned theater professionals. Communication sophomore Amira Danan, who plays Taylor, the younger son’s fiancee, said she always wanted to be a part of black art on campus, and said the show brings up key issues.

“It’s a really important piece of work that talks about a number of issues in a way that doesn’t belittle (them), but creates an interesting tension that allows both sides of an argument to be heard,” she said.

Though “Stick Fly” deals with issues of race, class and gender, Danan said the play’s focus on one upper-class black family presents a new perspective. Danan said seeing the life of black individuals in a different light is something NU students can benefit from. Picturing a different type of affluence will be interesting for them to watch, she said.

Communication junior Sophia Sinsheimer, assistant director of the show, said it is important to highlight black voices in theater. The show emphasizes race and gender and how that affects class, she said. Sinsheimer said she is looking forward to seeing if the play generates open conversations.

“That’s why we do theater,” she said.

Duncan said she believes the play’s exploration of family and betrayal will resonate with the NU audience.

“It’s always important to look at family as a community,” Duncan said. “It’s touching subjects that are very relevant right now in terms of race and class. (The play) explores what betrayal does to a solid foundation and how keeping secrets can damage a family structure.”