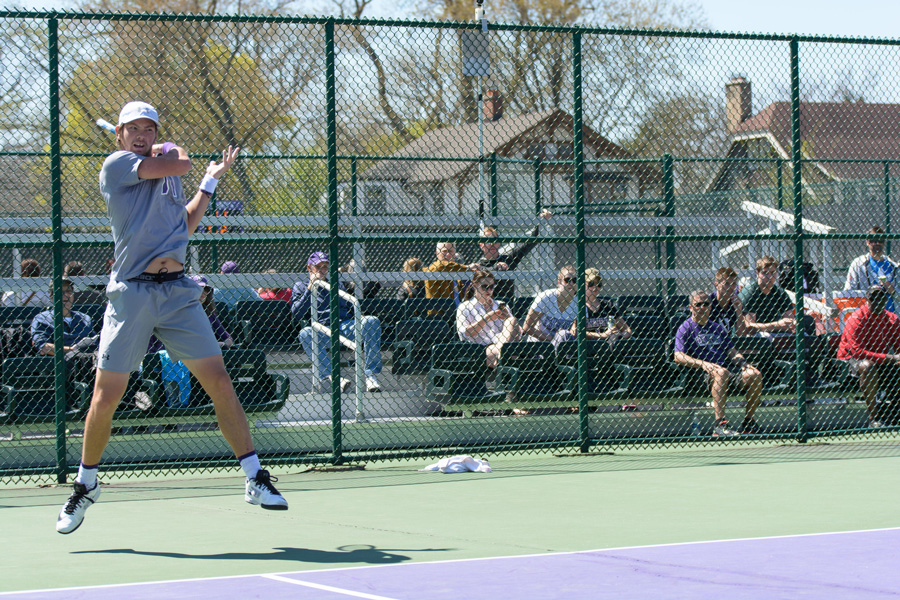 Strong Kirchheimer fires a forehand. The senior has played an integral role in the Wildcats’ success over the last four years. (Daily file photo by Kate Salvidio)

Strong Kirchheimer fires a forehand. The senior has played an integral role in the Wildcats’ success over the last four years.

But Swan said he never could have guessed how high the trio could ultimately carry the surging program.

Yet, four years later, Shropshire, Zieba and Kirchheimer depart as the program’s winningest senior class, leaving behind an unmatched legacy.

Through hours of practice and hard work, the three developed as individuals while carrying the Wildcats onto the national scene. Anchoring the No. 1 singles spot at different times during their final three years, the trio’s success can only be measured in their collective achievement.

And amid four years spent crafting NU’s identity, the seniors forged a bond that will forever leave an impact on the program.

When Shropshire came to Evanston, the former highly acclaimed recruit wasn’t eyeing greatness. He cared little about joining the ranks of NU’s greatest and never stopped to envision how good the program could become under his leadership.

For Shropshire, the results were secondary to the process.

He wasted little time doing so, exploding onto the scene in his first year. Competing at No. 2 singles, the freshman tallied a 24-5 record, good for the third best mark in NU history. In Big Ten play, Shropshire posted the Cats’ first undefeated campaign in over 20 years and picked up the conference’s Freshman of the Year accolade, as well as an All-Big Ten First Team selection.

And through it all, the newcomer operated with veteran’s poise.

“I guess I’m an old man at heart,” Shropshire said. “Strong was just making fun of me today about how I’m an 80-year-old man and how I go to the early bird special on Thursdays. It’s just always how I’ve done things, just being thorough and as professional as I can.”

His attitude closely mirrored that of Swan, a no-nonsense leader with high expectations. It was that mindset that impressed Shropshire in his recruiting visit, and — four years later — the mindset that has rubbed off on the entire roster.

Throughout his four years, Shropshire continued to get better. As a sophomore, he was promoted to the top singles spot, where he tallied 23 wins. He was again a first team-All Big Ten selection — this time unanimous — and became a mainstay in the nation’s top 100.

He returned to the No. 2 court his junior season as Zieba made a surge to the top. Nonetheless, he was recognized as a first-team selection yet again. By Shropshire’s senior year, Kirchheimer had made the leap, pushing his teammate to down to No. 3 after an injury derailed his fall campaign and forced him to miss extended time during the regular season. Even so, Shropshire was given second-team all-conference accolades.

It was in his first two seasons that Shropshire’s individual career seemingly hit its peak, though it was in the back half that the team hit its collective stride. In the end, Shropshire’s early success set the stage for one of the greatest chapters in program history.

“The maturing process happens at different points,” Shropshire said. “If I was able to motivate these guys a little bit at the beginning, I’m glad I was able to do that.”

Shropshire seemingly brushed off the growing pains that most freshmen endure. Zieba, on the other hand, joined the Cats with plenty of room to grow.

He was thrown into the fire, getting the majority of reps as the team’s No. 3 singles player. But the then-freshman had to wait before his time in the spotlight arrived.

“It was tough being a freshman. There’s a lot of expectations and (you try to) live in the moment, but at the same time not get too low when things aren’t working out,” Zieba said. “I made myself believe that as long as I’m putting in the work and working hard, the results will come.”

Two years later, they did.

A pair of modestly successful campaigns at No. 3 earned Zieba a qualifying draw to the ITA All-American Championships. But being overlooked for the main draw didn’t matter to the then-unranked junior, who erupted with six straight wins before falling to the eventual champion in the quarterfinals.

The Cinderella run earned Zieba a trip to the National Indoors, and when dual play began in the winter, Swan had found his new No. 1.

With help from the steady Shropshire and an emerging superstar in Kirchheimer, Zieba led the Cats to their finest season in program history.

With no shortage of elite talent, it was clear NU had plenty of potential. But after dismantling No. 8 Illinois and losing just 4-3 to No. 3 TCU before the bulk of Big Ten play began, the Cats sent a message to the country.

“I’ll never forget beating Illinois and sharing the victory with Sam and Strong,” Zieba said. “It was one of the most unbelievable years.”

In the end, the Cats won a program-record 26 matches and finished the season ranked No. 14, giving them the opportunity to host the first two rounds of the NCAA Championship where they were upset by Stanford.

Even so, the historic campaign showed what NU tennis could be.

“We try to build on each year and last year was a great year,” Swan said. “It was a really good experience to be with these guys and to see how hard they competed for our team over the course of the entire year so it was a lot of fun to be a part of.”

And leading the charge was Zieba, who posted 21 singles wins, earned a unanimous All-Big Ten First Team selection of his own and climbed as high as No. 8 in the national rankings.

Earlier that year, the junior was a nameless cog in the eyes of the NCAA. But the work ethic that earned him a spot on Swan’s team and motivation from Shropshire and Kirchheimer pushed Zieba to greatness.

“We built off each other and used each other to get better,” Zieba said. “Freshman year, you’ve got a lot on your plate and Sam and Strong were always there for me. … Just being there for each other through the highs and lows was really important.”

Kirchheimer had the steepest climb to make of the three. He entered his freshman season as the least heralded of the trio and was inserted into the singles lineup at No. 5.

“I probably wasn’t the top recruit coming in,” Kirchheimer said. “I don’t know if Arvid thought that much of me initially because I was kind of a small kid.”

But much like in Shropshire and Zieba, Swan also saw a fastidious work ethic in the scrawny freshman.

Years later, those hours of practice have left Kirchheimer atop the singles lineup as a senior and with the most combined singles and doubles wins in program history.

As a sophomore, Kirchheimer emerged as an All-Big Ten second team selection. His 25-12 singles campaign at No. 2 set the stage for his success during the historic 2015-2016 season.

As the Cats surged, the then-junior put together a nearly flawless season, anchoring the No. 3 spot and losing just one dual match all year — a defeat to Illinois’ Aron Hiltzik he later avenged. And after joining an exclusive club of 14 players with a 30-win singles season, the “small kid” from North Carolina was presented with a new opportunity.

The summer before his senior year, he played in 10 professional tournaments and won 18 matches. That success allowed Kirchheimer to feel more confident entering the fall.

Even as he has improved, Kirchheimer regularly critiques himself. Of his 26-11 season this year, Kirchheimer said, “I still think I could have had a better year than I’ve had. I’ve let a lot of matches slip away.”

Through it all, Kirchheimer and his fellow seniors have continued to forge a special bond.

“Sam and Konrad are my two best friends — we live together and we’ve always been very close,” Kirchheimer said. “The fall of my freshman year, they probably thought I was a little bit of a weird guy. But then they got used to me.”

The Cats underachieved in the seniors’ final season, winning just 21 times with only the NCAA Tournament remaining. But the trio’s growth over their four years in Evanston — especially Kirchheimer’s meteoric rise from an overlooked prospect to the nation’s No. 37 player — is indicative of NU’s culture that all three helped create.

Now, Kirchheimer and his classmates leave behind both a winning legacy and a foundation for the program’s future success.

Once the NCAA Tournament concludes, the trio will prepare for the next chapters of their individual careers. For Shropshire and Kirchheimer, the immediate future includes professional tennis. Zieba, on the other hand, will move on from tennis for the time being.

And though all three know their paths will cross again, leaving the school, the team and each other behind isn’t going to be easy after four special years.

“It’s tough leaving two guys behind that you’ve grown a strong relationship with,” Zieba said. “Not being there with each other every day will be tough.”

NU will also look to begin its next chapter once the acclaimed trio hangs up the purple for the last time. And though Swan knows there are challenges ahead, he’s confident the three men he recruited years ago have left the program in a position to succeed.

“When you can leave a program in the state they’ve left it … the future’s so bright for all three,” Swan said. “That’s going to be tough not being around them all the time, but it’s the next step for them, so I’m excited.”