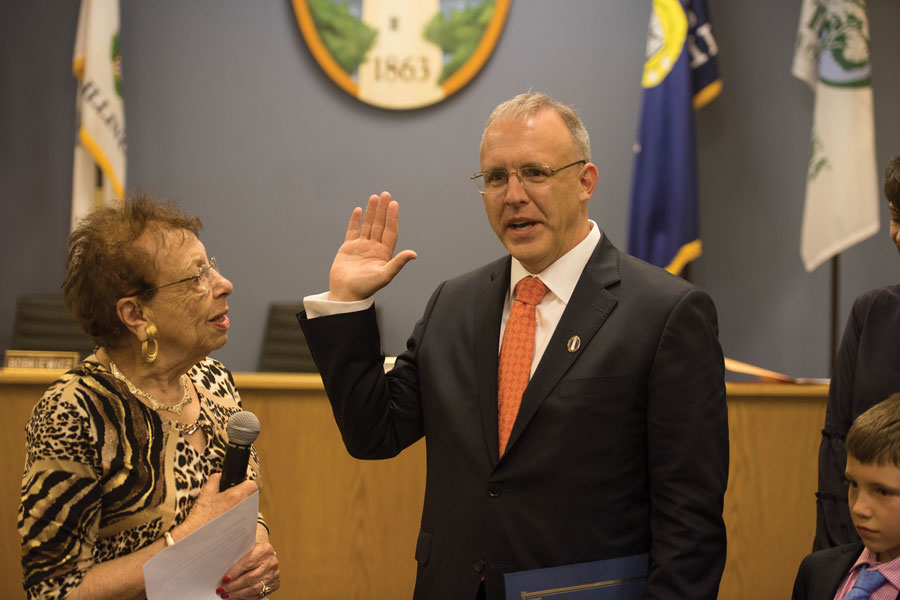 Former Mayor Lorraine Morton administers the oath of office to Mayor Steve Hagerty. Hagerty and other members of the 80th City Council were sworn into office Monday evening.

Hagerty made his first mayoral remarks to the council and a crowd of family and friends, praising the high voter turnout and calling for respect and civility. At a time of polarizing politics, Hagerty challenged the new council to set a positive tone for other communities.

“It is a pleasure to preside over the 80th City Council, and it is a true honor to be up here with so many people in this crowd who have put so much into the campaigns,” he said. “Democracy is alive and thriving in Evanston, Illinois, and it’s a great place for us to demonstrate to others what a democracy can do.”

Prior to his inauguration, Hagerty stepped down from his role on the boards of Youth & Opportunity United — an organization that provides after-school care — and First Bank & Trust, a local bank.

Hagerty announced the decision Monday in a statement on Facebook.

“As I transition into this new role I say goodbye today to two amazing local organizations,” Hagerty said in the statement. “I will deeply miss working with both of these organizations but know that together with others we will continue to bring to life the full potential of young people in Evanston and create a vibrant, dynamic local economy.”

Prior to the new council’s inauguration, previous officials met for a final time and awarded commendations to those leaving office.

Former Alds. Delores Holmes (5th) and Brian Miller (9th), as well as former city clerk Rodney Greene, were commended for their years of service on the council. Former Ald. Mark Tendam (6th), who did not attend Monday’s meeting, was also commended for his service.

Officials also honored former Mayor Elizabeth Tisdahl, who received praise for her years of service. She began serving as 7th Ward alderman in 2003 and became mayor in 2009. A water filtration building located on 555 Lincoln St. was dedicated in her honor and named the “Elizabeth B. Tisdahl Water Filtration Building.”

Rainey and Wynne presented Tisdahl with a certificate and a gold-plated gavel.

City manager Wally Bobkiewicz presented Tisdahl with a parting gift on behalf of city staff. Typically, Bobkiewicz said, outgoing mayors receive clocks or plaques, but he thought of a different gift for Tisdahl that would incorporate her dedication to water in the city.

He recalled attending a celebration of the 100th anniversary of potable water in Evanston, where officials gave Tisdahl a relic from the water plant. He said she described the gift as the “neatest thing I’ve ever gotten as mayor.”

Bobkiewicz and Dave Stoneback, director of Public Works, presented Tisdahl with a sculpture made from part of a water pump. The sculpture, designed by a local artist, includes a carved hand and words including “diversity” and “sustainability.”

Tisdahl said the sculpture was one of the most “unique and cool” gifts she has ever received. She also thanked the members of the 79th City Council for their years of service.

“I would like to thank the best darn city staff, and have made my life tremendously easier,” Tisdahl said. “You have been a fabulous city staff and council.”

Correction: A previous version of this story misspelled Cicely Fleming’s name. The Daily regrets the error.