The Daily Northwestern • May 9, 2017 • https://dailynorthwestern.com/2017/05/09/campus/alumnus-j-b-pritzker-discusses-candidacy-for-illinois-governor-at-northwestern/ 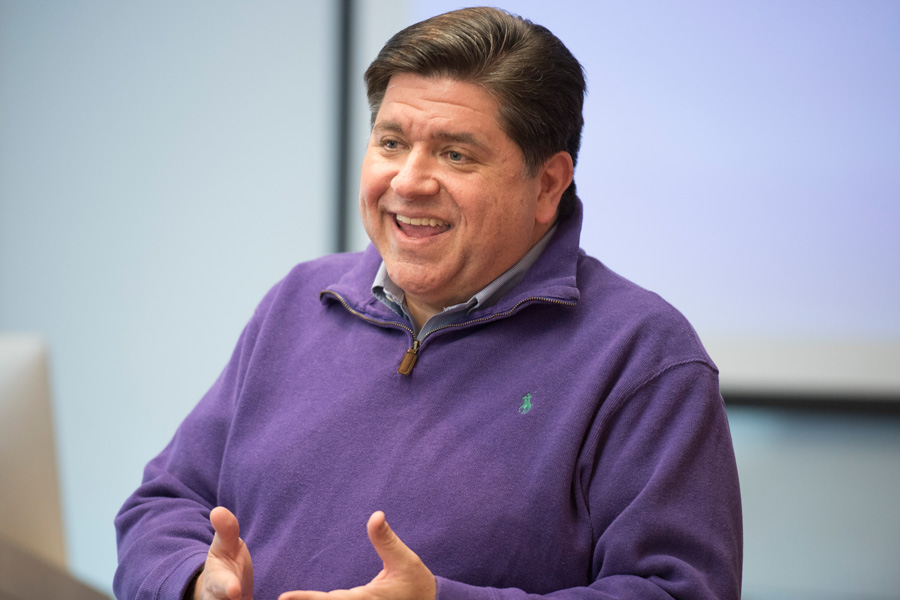 J.B. Pritzker speaks at an event hosted by Northwestern College Democrats at the McCormick Center Foundation Forum on Tuesday. Pritzker, who is running for lllinois governor, discussed his platform.

Philanthropist and venture capitalist J.B. Pritzker (Law ’93) continued his quest for the Democratic nomination for governor Tuesday with a visit to Northwestern, where he discussed his background, plan for Illinois and strategy for beating incumbent Gov. Bruce Rauner.

“Everything that we care about is under siege by Bruce Rauner and Donald Trump,” the Democratic gubernatorial candidate said.

Pritzker addressed an audience of around 25 students during an event at the McCormick Foundation Center Forum organized by Northwestern College Democrats. Weinberg sophomore Calvin Anderson, co-president of College Democrats, told The Daily the group hopes to bring all of the candidates to Northwestern to speak with students.

The candidate, a billionaire and heir to the Hyatt Hotels fortune, stressed his long career in public service and charitable work. He said his experience –– from helping secure federal money to fund breakfast for food-insecure children to his appointment as chairman of the Illinois Human Rights Commission –– was a critical reason why voters should choose him over his contenders.

Since little separates the candidates ideologically, the question of who has the ability and experience to accomplish their shared progressive goals is central, Pritzker said. He said, however, that because his campaign is self-funded, he is not beholden to special interests.

“I will be nobody’s governor but yours,” Pritzker said. “I don’t think that there’s any other candidate that’s running that can honestly say the same thing.”

Weinberg sophomore Rachel Hawley, who attended the event, said the idea that Pritzker’s ability to self-fund his campaign was not a reason to vote for him. She said she plans to vote for Biss in the Democratic primary.

“There’s a mentality of, ‘We have to put our billionaire against their billionaire,’” Hawley said, referring to Pritzker and Gov. Rauner.

Pritzker also spoke about his plans to resolve Illinois’ long-running budget crisis. The state has currently gone two years without a budget.

Pritzker told The Daily that while he has not endorsed a specific budget plan, two existing plans –– those for the Center for Tax and Budget Accountability and the Civic Federation –– are steps in the right direction.

“(More) revenue is required, we also need a lot more focused effort around saving money in state government by making the right kinds of investment in people,” Pritzker told The Daily. “Those things together will allow us to meet our obligations.”

When the discussion turned to women’s health, Pritzker emphasized his support for HB 40, a bill currently pending in the Illinois state Senate that would expand state funding of abortions.

Gov. Rauner has already vowed to veto the bill should it reach the Governor’s Mansion. As Rauner has consistently called himself pro-choice, Pritzker said his refusal to approve the bill was inconsistent.

“We live in a pro-choice state,” Pritzker said. “It’s not pro-choice if you can’t afford an abortion.”

SESP sophomore Alexa Sledge, who attended the event, said she didn’t think Pritzker was a substantive candidate. Sledge said she was considering to vote for Biss as well.