The Daily Northwestern • May 8, 2017 • https://dailynorthwestern.com/2017/05/08/sports/lacrosse-roundtable-writers-ruminate-on-northwestern-ncaa-tournament/ 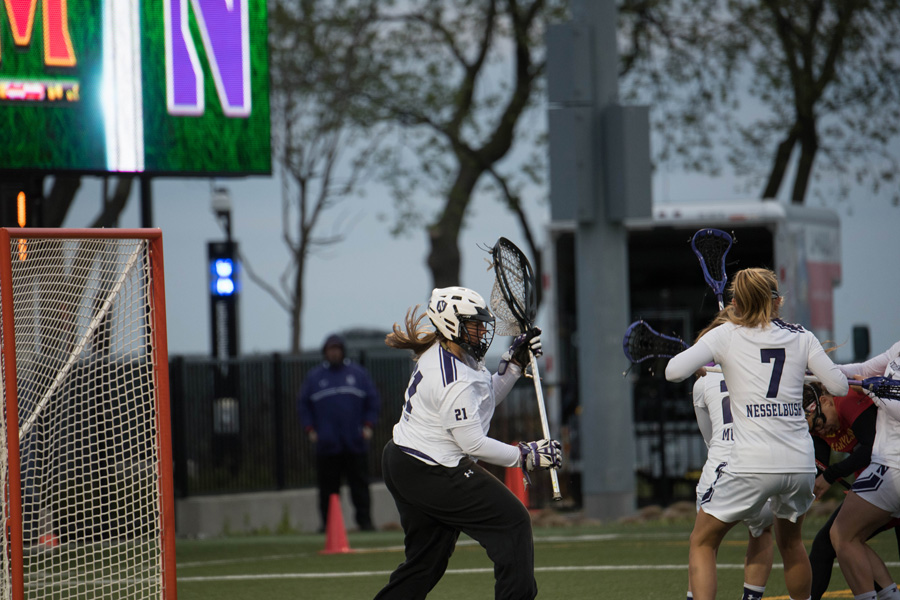 Mallory Weisse (left) readies to make a save. The sophomore goaltender could be key in the Wildcats’ NCAA Tournament success.

After an up-and-down season, the Wildcats (10-9, 4-2 Big Ten) have reached the postseason. Faced with a tough schedule and injury issues, Northwestern struggled to find signature wins against top-10 teams. An upset victory against then-No. 5 Penn State on Friday in the Big Ten Tournament semifinals, however, offered hope that the Wildcats could make a splash in the NCAA Tournament. Ahead of Friday’s first round game against Albany, The Daily’s lacrosse writers convened to discuss the team and the tournament.

1. What did Friday’s win over Penn State show you about this team and its postseason potential?

Ben Pope: Maintaining leads has been a struggle for NU all season, and after holding four different leads Friday — and dwelling on a one-goal halftime advantage for several hours during a rain delay — only to have the Nittany Lions rally back to tie the game each time, it seemed like the team’s resiliency might be drained. But it wasn’t, and that’s a great sign for the future. Freshman midfielder Megan Kinna (she of just eight previous career goals) made a brilliant interception and scored the game-winning goal in the game’s final minute, exemplifying just how much the Cats’ offense has diversified over the course of the season as well.

Dan Waldman: The big takeaway from Friday’s game is that NU can still hang with top teams in the country and can do it without its best scorer, junior attacker Selena Lasota. This season followed the same script as last year as the Cats lost to Penn State in the regular season and took their revenge in the conference tournament. Though this NU team isn’t the same one that won five consecutive NCAA titles, the program is far from dead. A win Friday showed that the Cats are still competitive and can still make noise going forward.

2. Who has the ability to be a difference maker for NU in the NCAA Tournament?

Waldman: The player to watch is senior attacker Christina Esposito, who scored 44 goals this year and leads the team in points. But Esposito is a staple in the offense, bringing a dodging ability that allows her to roll back to the goal and find the back of the net. Coach Kelly Amonte Hiller expects Esposito to perform at her best, meaning the difference maker lies elsewhere. For this team to make strides in the tournament, it will need perfect play from sophomore defender Claire Quinn. Quinn has been electric this season despite struggling with foul trouble. The defender has the pace to move the ball down the field and often gets the opportunity to do so, as she has caused 34 turnovers this season.

Pope: Somewhat forgotten beneath the storyline of NU’s offensive resurgence is the variability of sophomore goaltender Mallory Weisse, whose performances often correlate with her team’s success. In games where Weisse records a save percentage above her season average (43.3 percent), the Cats are 9-4. In games where her save percentage is below 43.3 percent, they are 1-5. Weisse has talked repeatedly about her need to mentally put poor stretches behind her quickly, and her ability to do that with her Big Ten title game outing — in which she let in 14 goals out of 20 shots on goal — will be crucial for NU’s NCAA Tournament chances.

3. How long will the Cats’ tournament stay be, and why?

Pope: NU will fall handily to No. 4 Stony Brook in the second round Sunday after edging Albany in an evenly matched first-round game. The Cats and Great Danes have similar resumes this season, but NU and Amonte Hiller have a vast advantage in NCAA Tournament familiarity — this is the program’s 14th straight appearance — that will give the team a leg up. Against Stony Brook, however, the Cats will be hard-pressed to overcome the talent gap that revealed itself in NU’s 13-5 loss to the Seawolves in early March.

Waldman: As poetic as it would be for the Cats to face a rematch of the conference tournament finals with Maryland in the quarterfinals, all odds are against them. NU doesn’t have the scoring spark to get past the first round and is looking at an early exit this year. The Cats got a tough draw against No. 17 Albany in the first round of the tournament and must face a team that has one of the most prolific offenses in the nation. Even if NU plays its best game defensively, without Lasota the offense doesn’t have the firepower to keep pace. See you next year, Cats.