The Daily Northwestern • May 7, 2017 • https://dailynorthwestern.com/2017/05/07/campus/freed-inmate-anthony-porter-misses-deposition-in-lawsuit-alleging-he-committed-double-homicide/ 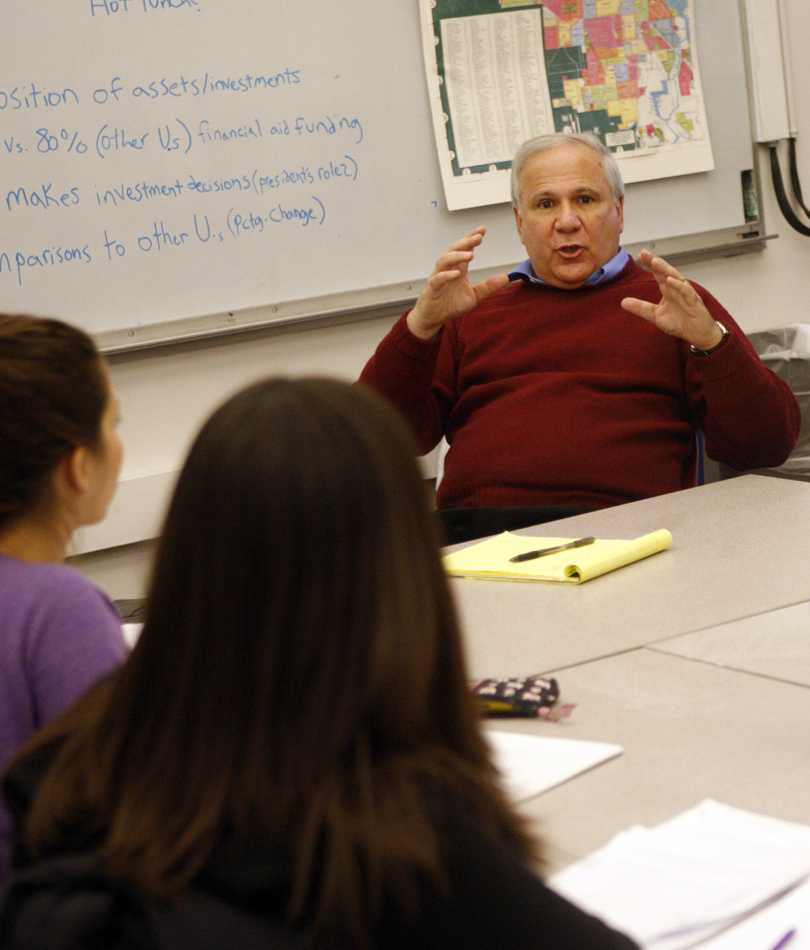 Former Medill Prof. David Protess speaks with students during an Innocence Project meeting at Northwestern in 2009. Anthony Porter, whose sentence was overturned due to evidence found by a Medill class led by Protess, missed a deposition last week in a lawsuit alleging he committed murder, according to a court filing.

Anthony Porter, a former death row inmate whose sentence was overturned due to evidence found by a Medill class led by former Medill Prof. David Protess, missed a deposition May 1 in a lawsuit alleging he committed the double-murders he was originally charged with, according to a court filing.

Porter was subpoenaed to give a deposition in a lawsuit filed by Alstory Simon, the man who was convicted for the murders after Porter was freed. According to a May 4 court filing, Porter was served with a subpoena in person in April requiring him to attend a deposition on May 1, but he allegedly failed to appear at the scheduled time.

Simon filed the suit in February 2015, alleging Northwestern, his then-attorney Jack Rimland, Protess and Paul Ciolino, a private investigator who worked with Protess’ class, “conspired to frame Simon for the murders.” Simon is suing for $40 million and alleged he was coerced into confessing to the 1982 murders of Jerry Hillard and Marilyn Green. He also alleged Protess and Ciolino created false evidence and fake witness statements.

As a result of Simon’s confession and the evidence gathered, Porter was freed just days before he was to be executed in a landmark case that contributed to the end of the Illinois death penalty. However, in October 2014, Cook County prosecutors threw out Simon’s conviction when questions were raised about the investigative methods used by Protess’ class.

The University, Protess and Ciolino are fighting the allegations, according to the Chicago Tribune.

Terry Ekl, an attorney representing Simon, told The Daily a petition for the rule to show cause will be presented to U.S. Magistrate Judge David Weisman on Tuesday. If granted, Porter will be served with the petition, which requires him to appear in court to explain why he missed last week’s deposition, Ekl said. The judge could decide to hold Porter in contempt of court if he does not have a good excuse, Ekl said.

Maurice Perkins, co-founder of the Inner City Youth and Adult Foundation, said he and his wife have been taking care of Porter “for the past 10 years.” Perkins said Porter missed the May 1 deposition because he could not secure representation in time.

Ekl told The Daily in an email on Friday that at the time he was “not aware of an attorney representing Porter.”

James Delorto, the investigator who served Porter with the subpoena on April 11, wrote in his proof of service form that Porter became “very irate and refused to accept the subpoena.” According to the form, Porter also “yelled obscenities” at Delorto and said he would not go to a deposition.

Perkins said Porter’s reaction was caused by the “traumatizing” experience of spending 17 years on death row.

“He’s psychologically certified unfit, not capable, so what is Mr. Delorto looking for?” Perkins said. “He’s looking for somebody all purported and like Barack Obama, all collected and like that, that’s not Porter.”

According to the May 4 court filing, Porter had already been served with a subpoena on March 20 to appear for a deposition scheduled on March 30. However, Porter was unable to find representation at that time, which resulted in the deposition being rescheduled for May 1, the filing said.

If Porter misses his court appearance to explain himself, Ekl said, Weisman could issue a bench warrant for his arrest. A warrant could also be issued if Weisman reschedules Porter’s deposition and he misses it again, Ekl said.

“Porter is going to be required by the judge to sit for his deposition, one way or another,” Ekl said. “He’s either going to do it voluntarily or in custody.”