The Daily Northwestern • May 5, 2017 • https://dailynorthwestern.com/2017/05/05/city/new-tower-proposal-receives-largely-positive-feedback-from-residents-business-owners-2/ 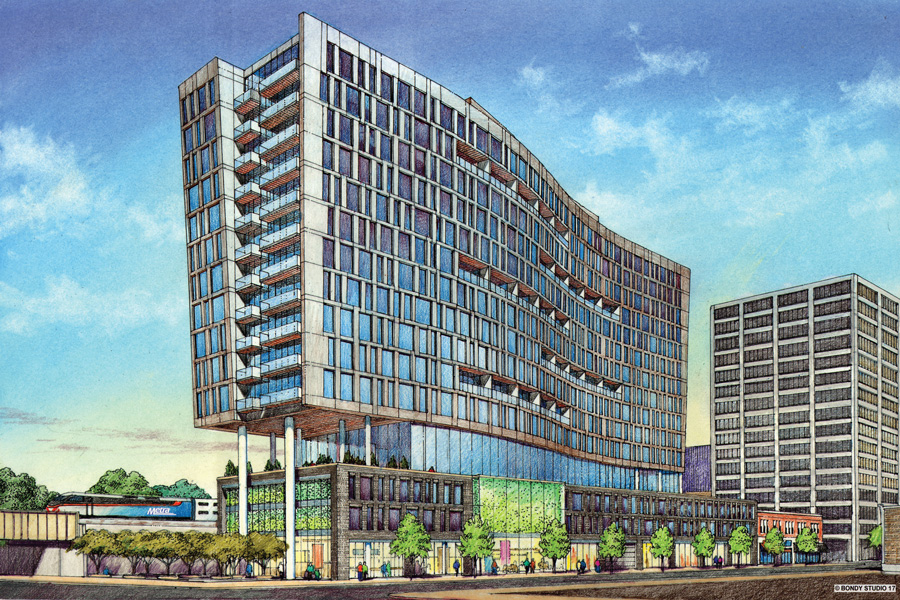 Rendering of the proposed new building. The plan for the new building was presented by Albion Residential, a group that acquires, develops and operates apartment complexes.

A Chicago-based group proposed a plan for a new, mixed-use residential development in downtown Evanston to local residents and business owners at Prairie Moon on Tuesday.

The new 16-story residential tower will be on the lot that currently houses Prairie Moon, 1502 Sherman Ave., and Tommy Nevin’s Pub, 1454 Sherman Ave. The plan was presented by Albion Residential, a group that acquires, develops and operates apartment complexes. If approved by City Council, the plan would allow the two restaurants to move into the building after its completion.

Jim Prescott, who works with Albion, said the group chose downtown Evanston for the new building because the group has a deep connection to Evanston.

“The president of Albion went to Kellogg,” Prescott said. “His first legal beer was at Tommy Nevin’s. He’s very familiar with downtown Evanston.”

The property will include a 4,000-square-foot park on the grounds, will have a LEED Silver certification and will generate between $900,000 and $1 million in annual tax revenue.

Prescott said Andrew Yule, vice president of development at Albion, and president Jason Koehn knew they couldn’t pass on the site when they first noticed it last year.

Ald. Donald Wilson (4th) said the process of getting a building approved in Evanston begins with a meeting with residents and business owners to get feedback on the proposal. Once the developers have that feedback and make any changes the community recommends, the plans will be presented to the Plan Commission, a group of community members appointed by the mayor.

If the design is approved, the plan will go to City Council for final approval.

Residents’ concerns with the proposal stem from parking issues the building may cause and the size of the building, Wilson said.

“It’s hard to fit what everyone wants in the plan,” Wilson said. “Generally speaking, the height and the mass will be a concern to the neighbors. It’ll have an impact on both parking, visually, and on the streetscape as well.”

However, Prescott said response from business owners and many residents was largely positive.

Rob Strom, owner of Prairie Moon, said relocating his business would be challenging while the complex is being built, but the move would ultimately help his business in the end.

Similarly, Ed Carrella, the CEO of Nevin’s, said though it is unfortunate Nevin’s has to move while the building is being built, he thinks it’ll help re-energize the restaurant.

Currently, Nevin’s property taxes are over $100,000, Wilson said. He said both Nevin’s and Prairie Moon’s property taxes are heightened because of their location in Evanston. Strom said if the two restaurants will be a part of the new building when it opens, it would make their utility costs lower.

“(The development) would help our cost of utilities, which are astronomical right now,” Strom said. “On a couple different fronts, it would help us out. It would allow us to bring a new face to an Evanston favorite. Kind of like doing it all over again.”