The Daily Northwestern • May 5, 2017 • https://dailynorthwestern.com/2017/05/05/campus/same-sex-marriage-activist-talks-landmark-supreme-court-case-lgbtq-rights/ 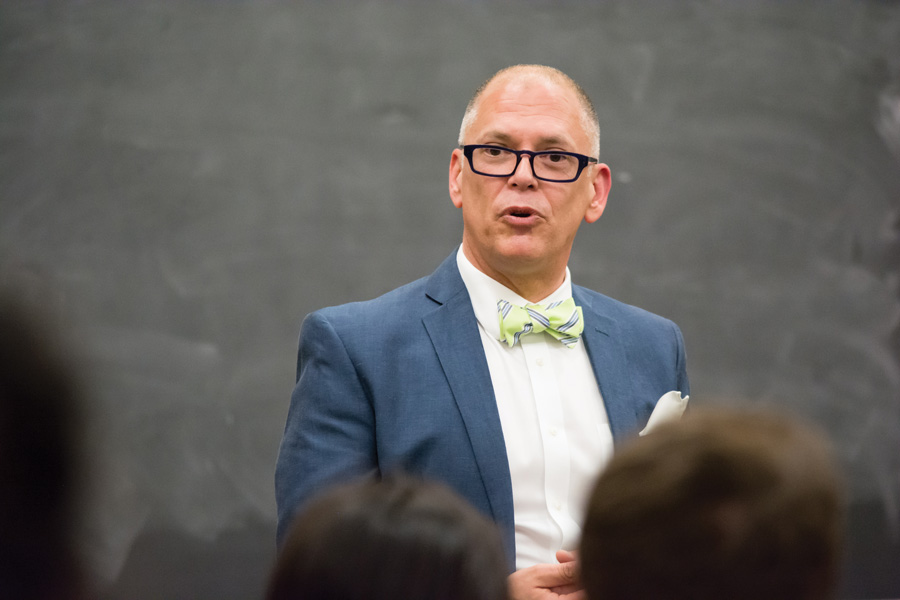 Same-sex marriage activist Jim Obergefell talks about his experiences as a plaintiff of a Supreme Court case that legalized same-sex marriage in Harris Hall on Thursday. Obergefell said he will continue to be involved social activism in honor of his late husband John Arthur.

In 2013, Jim Obergefell raised enough money to charter a medical plane to fly his terminally-ill partner and himself from Ohio to Maryland so they could get married.

“We got to say those words we never thought we would say, ‘I thee wed,’” Obergefell said.

Five days into their marriage, however, Obergefell said the two learned Ohio would not recognize their union on his husband’s death certificate.

Obergefell was the named plaintiff in Obergefell v. Hodges, the landmark Supreme Court case that legalized same-sex marriage. He addressed about 30 people in Harris Hall during an event hosted by College Democrats. In addition to sharing stories about his life, Obergefell encouraged students to be civically active and sustain the fight for progressive social rights.

Obergefell and his husband, John Arthur, got married in Maryland because the state had legalized same-sex marriage in 2012. The two wanted their union recognized by the courts because Arthur had been diagnosed with amyotrophic lateral sclerosis, commonly known as Lou Gehrig’s Disease.

Eleven days after the wedding, the pair sued the state of Ohio for the right to have their marriage recognized on Arthur’s death certificate.

The case won at the state level, but was repealed and eventually made its way to the Supreme Court. On June 26, 2015, the Supreme Court voted 5-4 in favor of Obergefell and more than 30 other plaintiffs. The decision effectively legalized and recognized same-sex marriage nationwide.

“Once it finally hit that we really did win, I burst into tears,” Obergefell said. “It seemed like everyone in the courtroom was crying. The air was electric with joy.”

College Democrats co-president Alex Neumann said he wanted to invite Obergefell to campus to meet the man who made it possible for his fathers to get married. The Weinberg freshman said he sympathized with the anger Obergefell felt when he first learned his marriage to Arthur would not be recognized in Ohio.

“I felt that same anger like, ‘Why are you not going to let my family do this?’” Neumann said. “Why are you so intent on treating us as inferior when my dads love me and love each other just as much as any other family?”

In addition to telling his story, Obergefell spoke about the current state of the LGBTQ movement.

SESP senior Sydney Selix attended the event and said she was interested in Obergefell’s story.

“I wasn’t expecting (the conversation) to be about his story,” Selix said. “I was choking up a lot … I loved it.”

Obergefell said he remains involved in social activism in honor of his late husband and plans to continue working to improve more social rights.

“It’s a scary time right now, and for me, I have to keep making noise,” Obergefell said. “I have to keep fighting for the people who can’t fight for themselves, and it’s an honor and privilege to be able to do that.”