The Daily Northwestern • May 5, 2017 • https://dailynorthwestern.com/2017/05/05/campus/historian-deborah-lipstadt-speaks-about-holocaust-denial-alternative-facts/ 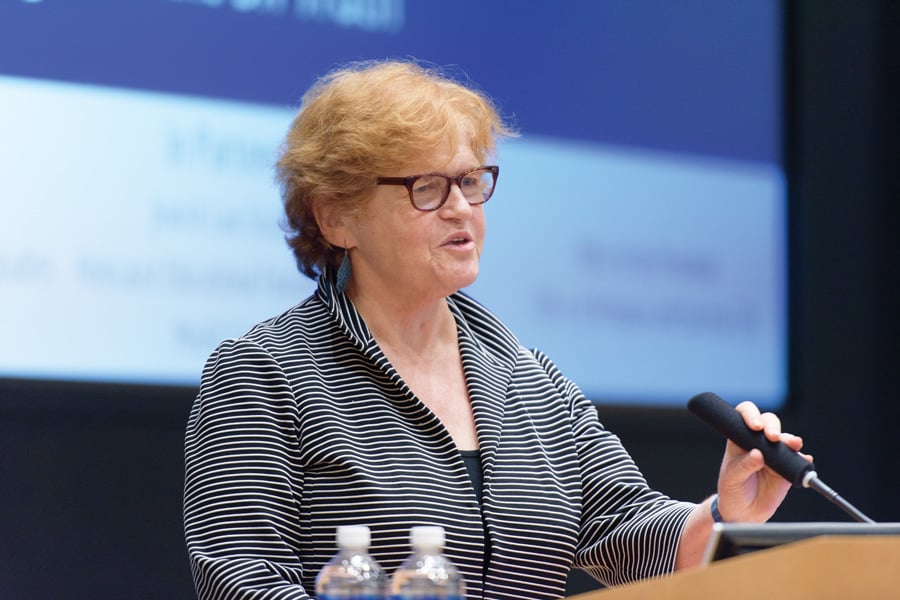 Deborah Lipstadt, professor of Modern Jewish and Holocaust Studies at Emory University, speaks to students at the McCormick Foundation Center Forum on Thursday. Lipstadt explained the motivating factors behind Holocaust denial and detailed her own legal battle with Holocaust denier David Irving.

About 150 people gathered at the McCormick Foundation Center Forum for the event organized by Fiedler Hillel as part of Northwestern Israel Week. Lipstadt is a professor of Modern Jewish and Holocaust Studies at Emory University.

During her talk, Lipstadt traced the motivations of Holocaust deniers back to anti-Semitism, explaining that deniers weren’t arriving at their conclusions by accident, but rather intentionally working to falsify history.

“There are facts, there are opinions and there are lies,” Lipstadt said. “What deniers were trying to do … was take the lies and dress them up as opinions, and if they are opinions, they can be part of the conversation.”

Lipstadt was recently played by actress Rachel Weisz in the 2016 film “Denial.” The film portrays a famous legal battle between Lipstadt and Holocaust denier David Irving, which began in 1996 and concluded in 2000. Irving sued Lipstadt in the United Kingdom, alleging that she had libeled him in her book, “Denying the Holocaust.”

In the ensuing trial, Lipstadt and her lawyers brought in historians as witnesses and showed Irving had consistently distorted historical records to minimize the events of the Holocaust.

During her talk, Lipstadt explained her decision to confront Irving in court.

“If I didn’t fight, he would win by default, and then he could say … ‘My David Irving version of the Holocaust is the correct version’,” she said.

Lipstadt said the courtroom scenes in “Denial” were taken directly from transcripts of the proceedings and helped the movie portray events accurately.

She also spoke about McCormick Prof. Arthur Butz, who denied the Holocaust in the 1976 book “The Hoax of the Twentieth Century: The Case Against the Presumed Extermination of European Jewry.” Butz has been criticized for his views, and there have been repeated calls for his dismissal over the years.

“Arthur Butz’s book ‘The Hoax of the Twentieth Century’ was really a seminal step in the period of the rise of holocaust denial,” Lipstadt said.

Lipstadt defended NU, and said Butz’s case had put the University in a “difficult position.” She said because Butz hadn’t brought his opinions into a classroom environment and holds tenure, there are no grounds for his dismissal.

In addition to discussing Holocaust denial, Lipstadt also spoke about the prevalence of alternative facts in the media.

Hillel executive director Michael Simon told The Daily that Lipstadt’s talk was connected to current events, and that it is important to understand “the idea of alternative facts, what is real news, fake news, (and) how are people understanding history and reality.”

“She is going to be a great guide into thinking about some of these really relevant issues,” Simon said.

Lipstadt said in the age of the internet, people must make a concerted effort to distinguish between truth and falsehood.

“Today we see extremism of all sorts dressed up as rational discourse,” Lipstadt said. “I couldn’t function in my work … without the internet and social media, but what it’s done is it’s flattened the differences between truth and fact.”

“She was very uplifting and gave a lot of really positive commentary on what we should do to combat deniers,” Rhum told The Daily. “That was really refreshing.”

This story was updated to clarify Lipstadt’s comments about Holocaust deniers and how they form their conclusions.