The Daily Northwestern • May 4, 2017 • https://dailynorthwestern.com/2017/05/04/lateststories/bienen-hosts-annual-american-liszt-society-festival-for-first-time/ 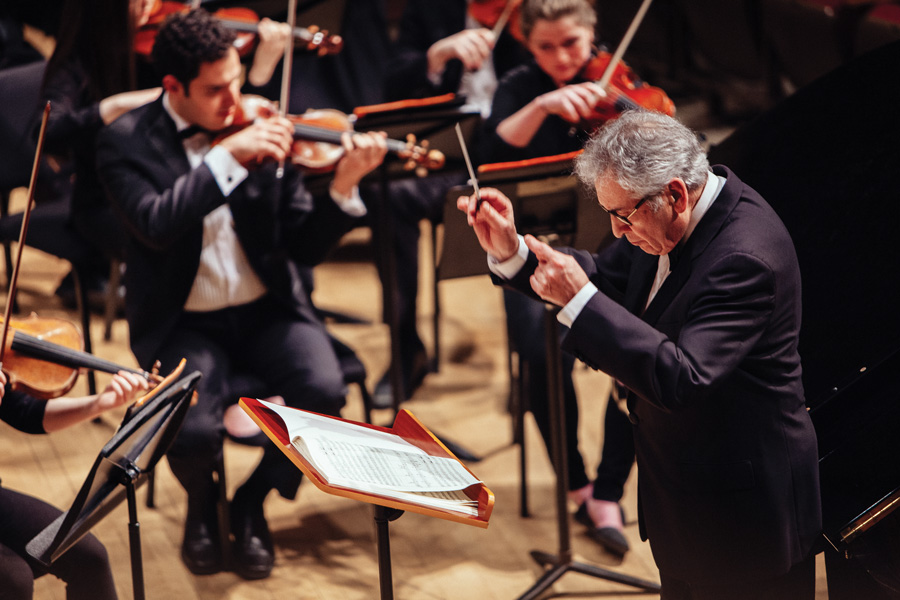 Bienen Prof. Victor Yampolsky conducts the Northwestern University Symphony Orchestra on Friday. The concert was part of the annual American Liszt Society Festival, which Northwestern hosted for the first time this year.

The Bienen School of Music hosted the annual American Liszt Society Festival for the first time this weekend, celebrating the works and influence of Franz Liszt, a 19th-century composer and virtuoso pianist.

The theme of the festival was “Liszt and the Orchestral Imagination,” focusing on the orchestral aspect of Liszt’s works, said Bienen Prof. James Giles, the festival director. The festival took place from April 27 to April 30 and featured performances, a master class, lectures and orchestral concerts.

Giles said the former president of the American Liszt Society reached out to him several years ago about hosting the festival. After speaking with Bienen administrators, they decided a good time to host the festival was after the completion of the new music building.

The Bienen professor’s first step in preparing for the festival was getting the Chicago Symphony Orchestra involved. The festival was then scheduled around its performance, he said.

“Because we have the Chicago Symphony involved it made sense to try to focus more on the orchestral aspect of his work, which includes a lot of piano arrangements and transcriptions of orchestral works,” Giles said.

The festival also featured a performance by the NU Symphony Orchestra and Chorus on Friday, which included Liszt’s orchestral piece “Legend of St. Cecilia” featuring the choir, Liszt’s Piano Concerto No. 1 and 2 and Béla Bartók’s “Concerto for Orchestra,” said Bienen Prof. Victor Yampolsky.

Yampolsky, conductor of the concert and director of orchestral programs, said he believes Liszt’s music has been “slightly overlooked” and said he was a pioneering composer who was greatly affected by literary ideas.

“It’s very common for us to see musical ideas of Liszt not necessarily related just to rules of composition by various notes and harmonies, but through images from poetry, nature and literary plots,” he said. “Liszt was famous for the most beautiful, intricate, romantic melodies.”

New York University Prof. emeritus Rena Mueller, a former editor for the Journal of the American Liszt Society, spoke during a lecture at the festival.

“The idea that Liszt is simply a piano composer has often been a little too popular,” Mueller said. “He was a composer of magnificent orchestral works and for the symphony … he had a great deal of influence on the expanding orchestral repertory in the 19th century.”

Giles said he hopes festival guests are reminded of the “incredible versatility and variety” of Liszt and his successors.

“(Liszt is) one of those seminal composers of the 19th century who really was so influential that he changed the course of music history,” Giles said. “There are very few people who you can say that about, even among major composers.”