The Daily Northwestern • May 4, 2017 • https://dailynorthwestern.com/2017/05/04/city/defying-expectations-curts-cafe-owner-honored-with-award/ 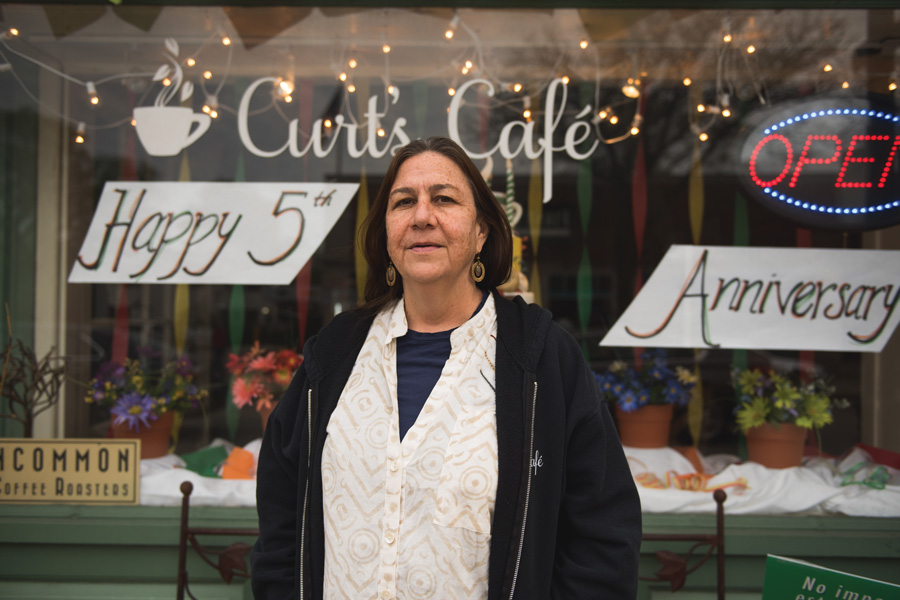 Founder and executive director of Curt’s Café Susan Trieschmann stands outside her Central Street location. Trieschmann was one of five Oakton Community College graduates who received the Distinguished Alumni award on Wednesday for their professional and community achievements.

In high school, teachers told Susan Trieschmann that she wasn’t smart enough to go to college.

“I spent 48 years of my life thinking something that wasn’t true, that my teachers in high school had made me believe,” she said. “Getting report cards that were all C’s and D’s is really difficult to overcome — that report card stuck with me like glue.”

But Trieschmann didn’t let those teachers’ expectations hold her back. After graduating from Deerfield High School, she attended Oakton Community College and DePaul University. She started her own catering company, became a founding member of Restorative Justice Evanston — an organization that helps with conflict resolution — and founded Curt’s Café on Central Street.

The cafe, which celebrated its fifth anniversary on Monday, has since expanded to two locations in Evanston and works with nearly 200 at-risk youth who may find alternative employment difficult, she said.

Trieschmann was one of five Oakton Community College graduates who received the Distinguished Alumni award on Wednesday for their professional and community achievements, Oakton’s development and alumni relations manager Elena Couto said.

From catering to Curt’s

Trieschmann said her path to Curt’s, which was not always easy, began with a passion for the restaurant industry.

After running a catering company — Food for Thought Catering — for more than 20 years, her brother-in-law Curt was diagnosed with lung cancer at 53, she said. He passed away a year after his diagnosis.

“One of the things he’s always wanted to do was go to college, and I had it in the back of my head that I wanted to graduate college before my kids did,” she said. “While he was dying, I decided to take a couple college classes … so not to dwell on sadness.”

From those few college courses, she said she was “hooked” on furthering her education.

Trieschmann finished a two-year program at Oakton and then transferred to DePaul, where she accidentally signed up for a class in restorative justice. Two years later, she graduated with a bachelor’s degree in social justice.

Although she said she’s always been an activist, it wasn’t until she took that class that she felt the need to create change in her own community. Trieschmann said she’s particularly passionate about injustices against young people in the incarceration system.

“At some point I decided I had to do something with my knowledge that could help them get a job, keep a job and make something better of their lives than what was being presented to them in prison,” she said.

Trieschmann set about looking for local programs that targeted young adults, but realized nothing combined workforce development and life skills into one program — something young people in the community said they needed to succeed.

In 2012, Trieschmann founded Curt’s Café — named after her late brother-in-law — to fill that void.

“We’re all the same”

Students work in the program at Curt’s intensively for three months before moving on to either college or another job, Trieschmann said.

The program includes training in culinary technique and life-skills instruction that the students need to fill in educational gaps, gain confidence and become ready to enter the workforce, according to the cafe’s website.

Trieschmann said she hopes Northwestern students will visit the cafe so her employees can have the experience of interacting with people their own age. She said she wants them to learn they are more similar to NU students than they are dissimilar.

“You tell the same jokes, you listen to the same music, you wear the same clothes,” Trieschmann said. “We’re all the same, they just have been told for so many years that they’re different, and we just need to bridge the gap.”

For Trieschmann, the hardest part is saying goodbye to the students because they become part of a family.

“It’s like letting my kids go to college,” she said. “It’s wonderful, that’s what we’re here to do, to get them jobs, but it’s hard to let your kids go.”

Thirty-six years after her high school teachers told her she couldn’t go to college, Trieschmann is pursuing a master’s degree in Forgiveness and Reconciliation from the Catholic Theological Institute at Chicago.

Couto, the Oakton administrator, said Trieschmann received the Distinguished Alumni award because she used her education for professional success and contributed to the community by “changing the lives of those students deeply.”

Lori Dube, director of networking at Curt’s Café, has worked with Trieschmann since the cafe’s opening in 2012. She said from the very beginning, Trieschmann’s “heart was very open to this population of young people.”

“It’s a wonderful thing to honor her,” Dube said. “She really represents the kind of grassroots programming needed to address so many of the issues that are going on in our communities.”