The Daily Northwestern • May 4, 2017 • https://dailynorthwestern.com/2017/05/04/ae/late-night-host-reflects-on-northwestern-experiences-writing-satire-in-current-political-climate/ 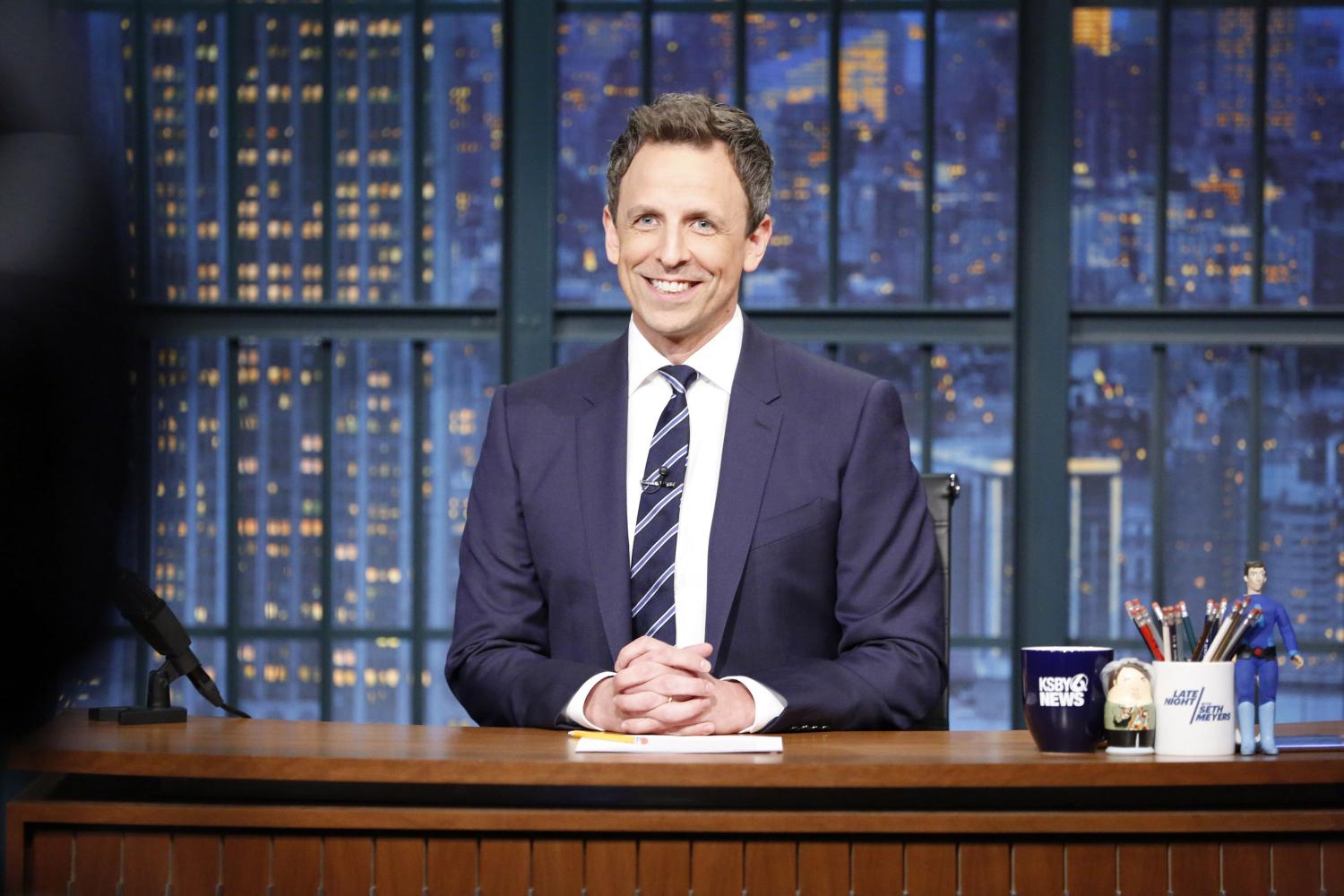 Seth Meyers did not take any political science or journalism courses during his time at Northwestern. As a radio, television and film major, comedy was what he was passionate about.

Now, two decades after graduating from NU, Meyers (Communication ’96) is celebrated as a late night host who blends the essences of those three areas — politics, news and comedy. As the host of NBC’s “Late Night” talk show, Meyers offers a dose of comic relief on the national stage to counter the current political climate. It is not uncommon for Meyers to begin his show by sitting behind his desk and telling his audience, “Let’s get to the news.”

Meyers has been lauded by critics and news sites for his sharp political satire, especially his commentary and analysis on last year’s presidential election. By the end of 2016, his show had more than 1.6 million viewers and was described as “one of television’s most intellectually curious talk shows” by Vanity Fair.

However, it wasn’t too long ago that Meyers stood in Northwestern’s Shanley Pavilion as a performer for Mee-Ow, an improvisation and sketch comedy group on campus. Meyers, who was named one of TIME’s 100 most influential people in 2014, told The Daily that his life would be very different now if had he not come across his passion for comedy through Mee-Ow.

“I auditioned for it every year I was (at Northwestern), and I only got in my senior year,” Meyers said. “Getting in changed everything.”

Through Mee-Ow, Meyers found his life calling in improv and sketch comedy, he said.

“I loved it so much that I remember thinking that I, for the first time in my life, knew what I wanted to at least try to do and that I would try to do it until someone told me I didn’t have to do it anymore, or I wasn’t good enough to do it anymore,” he said.

Mee-Ow, Meyers said, allowed him to work with other talented Northwestern comedians and gave him the chance to perform in front of sold-out student audiences, which inspired him to continue following his passion.

“I look back and I think if that had broken differently, I don’t know if I would have had the guts to keep trying,” he said.

Current Mee-Ow co-directors Isabella Gerasole and Ben Gauthier recently met Meyers during a meet-and-greet in New York. Gerasole, a Communication senior, said they bonded over their experiences in Mee-Ow.

“He told us that he sang — because we have to sing in Mee-Ow — he sang ‘Dancing in the Dark’ and ‘I Need a Hero.’ That was funny to hear about that,” she said. “He was like ‘Oh, I remember Shanley, the shack,’ and we were like ‘Yep, still there, still f—ing gross.’”

Meyers, like actress Julia Louis-Dreyfus (Communication ’83), is one of the group’s “legacy people,” Gerasole said. Still, she said the group is “brand new” each year and doesn’t try to live up to any historical expectations.

Because Mee-Ow has been around for 43 years and has well-known alumni, Gerasole said sometimes there is an expectation of what the show is supposed to be.

“It is a brand new group (every year), so it doesn’t matter what has happened in the past,” she said. “This is our version of the show this year.”

After performing in Mee-Ow, Meyers joined the iO Theater in Chicago, where he took improv courses and was part of a group called “Preponderate.” In 2001 — just five years after graduation — he joined NBC’s “Saturday Night Live” as both a performer and writer. It was there that he found his comedy persona as an anchor for the “Weekend Update” segment, a persona that would follow him to “Late Night.”

It was also at SNL that Meyers said he learned how to become a political comedian.

“In a lot of ways, I had this secondary education in SNL,” Meyers said. “It was sort of a graduate program for comedy, and the lessons I learned there are still the ones that I apply every day in my show now.”

After about 13 years on “SNL,” Meyers said goodbye to the show and moved his anchorman wit next door to the eighth floor of the 30 Rockefeller building — the “Late Night” stage.

“The first year I was gone, I was very sad because I missed everybody,” Meyers said. “And then I sort of found this home at ‘Late Night’ where I tried to love everybody as much as I loved the people at SNL, so then I was good.”

But then the 2016 presidential election began, and Meyers said he was “super jealous” that he wasn’t on SNL anymore.

“Obviously, not just for myself but for a lot of my colleagues, it was an election that was tailor made for comedians to talk about every night,” he said.

During the the election, Meyers said, he and his “Late Night” team decided to make a production change that became a key characteristic of his show.

Unlike other night talk show hosts, Meyers doesn’t do his opening monologue standing up in front of the crowd. Instead, he throws it back to his “Weekend Update” days and sits behind his desk, reading the day’s headlines and punchlines, all while attempting to maintain a straight face.

This, he said, was the show he wanted to do. As multiple news outlets and critics reported, Meyers had found his voice.

“Since the election happened we found out this is the show we like doing,” Meyers said. “We’re going to keep trying to do it as long as we can.”

On Nov. 9, Meyers delivered a powerful, post-election monologue behind that desk.

“I do really feel for the parents who had to explain this to their kids this morning, especially parents with daughters, because a lot of them, like me, probably thought Hillary would be our first woman president, but she won’t be,” Meyers told the audience. “But that does mean that someone’s daughter is out there right now who will one day have that title.”

Holding back tears, Meyers told the audience about progressive wins in the 2016 election — including the election of U.S. Sen. Tammy Duckworth (D-Ill.) and the legalization of recreational marijuana in California.

In his monologue, Meyers remained hopeful that President Donald Trump and his supporters would be kind to those who felt offended by Trump’s actions during the campaign trail. Meyers also held on to the assurance that somewhere out there, the first woman president was listening to his words.

“Maybe you’re a woman who’s currently a senator; maybe you’re still in college,” he said. “Hopefully you’re not a toddler, but who knows? With the way things went last night, who knows?”

Meyers told The Daily he had a very hard time sleeping on election night, saying he kept waking up and trying to process what had happened. He began taking notes in the middle of the night, he said, knowing he’d have the opportunity to sit behind his desk the next day and talk about what the experience meant to him.

“I counted myself lucky because I feel like there were so many people who couldn’t go out and tell everybody how they were feeling,” he said. “It was very cathartic to do that with an audience.”

When planning a show, Meyers and his writing team try to fit in as many jokes as possible, while maintaining a fair news balance, he said. And though he has found a voice that suits him, Meyers said he wishes events hadn’t transpired the way they did.

“Again, if I could go back in time and have a different outcome, I would certainly be happier with that,” he said.

Though he doesn’t only talk about political news in his show — Meyers freely tackles anything on the news cycle, from Trump’s latest comments, to curious, hyperlocal news — he said he was surprised to find that now, more than ever, people have an appetite for political satire.

For now, though, Meyers said he and his writers will continue working with whatever material is made available to them through Trump and members of his team, such as Kellyanne Conway and Steve Bannon. Meyers said he’s not afraid of “normalizing” these characters, because “they’re not doing anything normal.”

The day his job will get hard, Meyers said, is when they start doing “normal” things.

“Normalizing crazy behavior, you kinda have to go out of your way to do,” he said. “We’re just basically staying in our lane of describing the actions that they take.”

Meyers credits his interest in politics not to Northwestern but to his New Hampshire upbringing. He said living in the swing state made him aware of political campaigns, as the “circus would come to town every four years with all the candidates.” Still, he said he owes some of his performance methods and styles to the people he met at NU.

“One of the things I told my parents — because I was not a great student and I wouldn’t say I had perfect attendance in classes, but they paid a lot of money — (was that) that money went to me meeting people who at that age inspired me to me the best person I could be,” he said.

One of those people was performance studies Prof. Paul Edwards, whom Meyers described as one of his most influential teachers.

Edwards, who will retire from the School of Communication in 2019 after 40 years of teaching, said Meyers took his Performing the American Fifties course, which examines American films, novels, culture and performance in the 1950s.

The class, Edwards said, is based on his experiences growing up in that era and touches on political and pop culture commentary. He said it also attracted many Mee-Ow performers, Meyers being one of them.

Meyers was not the kind of student who took over a room’s spotlight, Edwards said. Instead, he was a “watcher.”

“I could just feel him sometimes with his mouth behind his hands making a joke to the people in the back of the room, but he was just somebody who was paying attention,” Edwards said. “I won’t say that he was looking for material, but he was studying people in the room, and I think that a really gifted comic has to be able to look at a room like that.”

Edwards, who has followed Mee-Ow closely since he began teaching at NU in 1979, said he thinks comedy is one of the most authentic forms of expression and critique humans have.

The current political climate, he said, lends itself to this comedy, but news that fuel these jokes are not a recent development.

“Comedy has survived in part because politics has always been this crazy,” he said. “Trump magnifies some of the cartoon aspects of it, and he gives comedians lots of material but … I can’t remember a time in my adult life when we weren’t mad at the government.”

For Gerasole, the Mee-Ow co-director, it is a comedian’s responsibility to be aware of current events. Still, comedy also serves as an escape for the audience, she said.

This is why current Mee-Ow performers address any political jokes at the beginning of their shows, before switching the narrative to something else, Gerasole said.

“For the rest of the night, we just want to serve as an escape,” she said. “So many other people have done this so articulately and we don’t feel like we have to do it, but it is our responsibility to always be aware.”

When remembering his time in Mee-Ow, Meyers told The Daily he wishes he could tell his 20-year-old self to practice comedy all the time, to better figure out his voice. He encouraged current NU comedians to be fearless and embrace their comedy.