The Daily Northwestern • May 3, 2017 • https://dailynorthwestern.com/2017/05/03/lateststories/boomshakas-20th-anniversary-show-celebrates-community-creativity/ 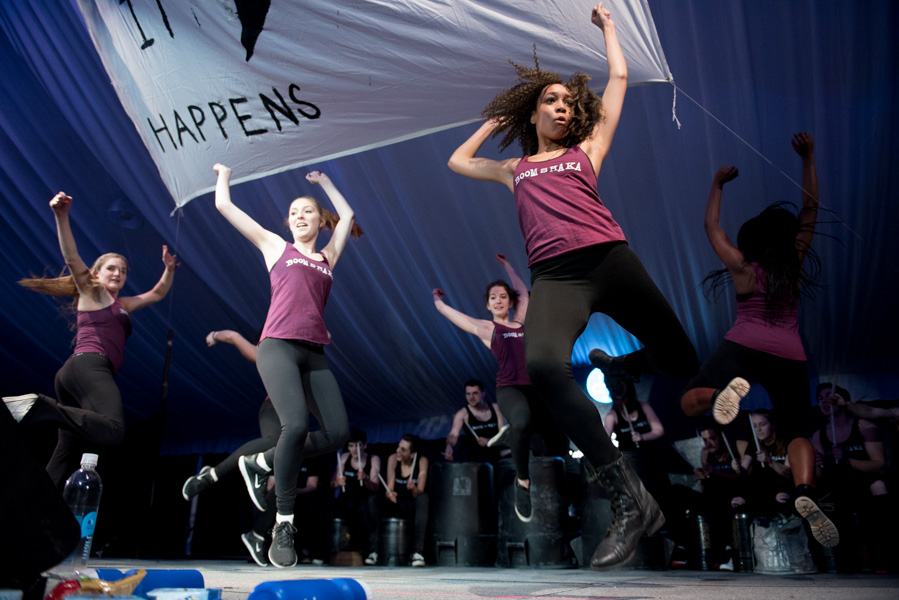 Boomshaka performs during Block 9 of Dance Marathon. The group will present its 20th anniversary spring show this weekend in Shanley Pavilion.

Trash cans, dancing, paint buckets. These are just a few elements of a Boomshaka show.

Northwestern’s drum, dance and rhythm group will present its 20th anniversary spring show, “Back to Zero,” this weekend in Shanley Pavilion. Over its two-decade span, Boomshaka has drawn in dancers and drummers with its unconventional performances and bred a few post-graduation performance groups.

The group began in 1997 after Josh Berner, a Northwestern Drumline member, wrote a piece for a Waa-Mu show that featured energetic drumming on pots, pans and lunch trays. Two years later, Boomshaka held its first show to a sold-out crowd.

Simon Barnicle (SESP ’16), who said he joined the group after being encouraged by his friends in Drumline, said the group’s intense practice schedule and performances help create a close-knit environment.

“Boomshaka was everything, I loved it,” Barnicle said. “I met my best friends there.”

Coffee said she appreciated the community that Boomshaka provided her and loved the opportunity to meet upperclassmen, who she may not have met otherwise.

Members of the fully student-run group write all of the music and choreograph all of the dances themselves. Throughout the year, Boomshaka performs at corporate events, parks and schools, Barnicle said. During Spring Break, the group typically heads to a member’s hometown and performs around the area.

For alumni, the spirit of friendship that Boomshaka created holds deeper meaning. David Skidmore (Bienen ’05) said he feels Boomshaka played a significant role in his life.

“I wouldn’t be the person I was today without (Boomshaka),” Skidmore said.

Madeline Hooper (Weinberg ’15) said she first discovered Boomshaka during Wildcat Welcome and fell in love with the group five minutes into the audition process. She said she plans on attending the group’s show this weekend.

Before college, Hooper trained as a tap dancer, she said. Boomshaka’s incorporation of rhythm attracted her to the group.

“In many ways, (Boomshaka) is this perfect coming together of movement art,” Hooper said.

Boomshaka has led to more post-graduation ventures than just Third Coast Percussion. In 2006, Stephanie Paul (Communication ’06) founded Be the Groove, a professional offshoot of Boomshaka, with other NU alumni. Paul said the untraditional nature of Boomshaka helped breed her creativity after Northwestern.

“I learned how to create outside the box,” Paul said. “Boomshaka is constantly thinking untraditionally.”