The Daily Northwestern • May 3, 2017 • https://dailynorthwestern.com/2017/05/03/campus/new-york-times-upshot-editor-discusses-data-visualization-storytelling/ 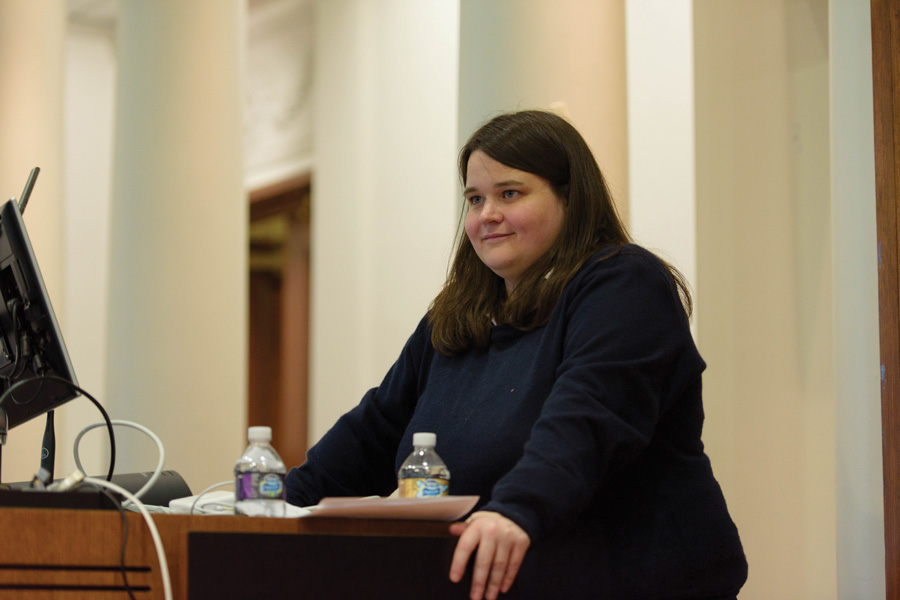 Amanda Cox, editor of the New York Times’ Upshot, explains the importance of data visualization in Harris Hall on Wednesday. She said though graphics and charts can enhance a story, they shouldn’t be overly complicated.

Data journalist Amanda Cox, editor of The Upshot at The New York Times, explained the basics of data visualization and warned against overcomplicating charts and data during a talk Wednesday.

“Don’t do cool for the sake of cool,” Cox said to a crowd of about 100 people in Harris Hall. “I would invest in learning (how) we can say the most compelling thing sharply, whether that is data visualization, or designing for text, or even a really good email.”

Psychology Prof. Steven Franconeri, an event organizer and the director of Northwestern’s cognitive science program, told The Daily that data journalists like Cox are able to not only sift through large volumes of data, but communicate it effectively to their audience.

“Some of the most skilled presenters of those kind of analyses in the world are data journalists,” Franconeri said. “They have the journalist’s touch to distill down what’s important, and they’re also good at showing you patterns in data and giving you context so you know how to think about (the data) compared to the rest of the story.”

Cox said though stand-alone data visualizations can be effective, contextualizing them can make abstract topics or figures more accessible to readers.

She cited an example of a map that superimposed the Apollo 11 landing site on a baseball diamond. She said though readers may forget the exact distance of the moon walk in feet or meters, they would probably remember its approximation to the baseball field because the analogy connects to preexisting knowledge.

Cox also said graphic data visualizations can be powerful because they illuminate outliers and other oddities that may be obscured in simple tables or charts.

Though these more detailed visuals can enhance a data set, Cox told The Daily that a focus on mobile news presentation in the industry sometimes compels her team to “simplify our ideas in ways that can be good.”

“There are times I look back at our work and I actually like the mobile version better because once you get away from it for a little while, you realize it was cleaner and simpler,” she told The Daily.

Pou Mai, a data analyst at NU’s Feinberg School of Medicine who attended the event, said though she wasn’t shocked by any aspects of Cox’s presentation, she hopes to incorporate greater context into her data visualization because background “plays a huge part in the story.”

“Data visualization is a really important aspect of my daily tasks,” Mai said. “I’m always interested in learning more about it.”

During the Q&A portion of the event, Cox said the majority of the work done by the graphics department today at The New York Times is independent of other desks. This shift, she said, illustrates an increased focus on data and data visualization within other organizations like The Washington Post and The Guardian as well.

Despite her experience in the field, however, Cox said there’s “never any one answer” to how to best present a data set.

“Often, I look for something that feels intuitive, that feels like something pops out,” she said. “Being able to just try on a bunch of different chart forms is basically the only way to do that.”