The Daily Northwestern • May 3, 2017 • https://dailynorthwestern.com/2017/05/03/campus/director-talks-mixing-comedy-horror-in-moviemaking/ 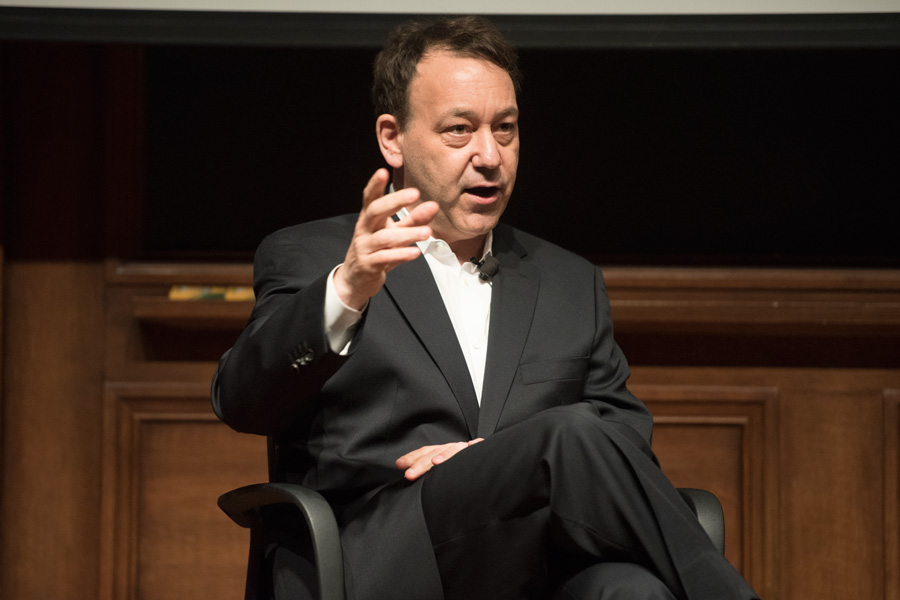 Director and producer Sam Raimi talks on Tuesday. He discussed mixing genres, such as horror and comedy, in his films.

Director and producer Sam Raimi said when he began directing films, he did not like horror movies. But it was his horror film, “The Evil Dead,” that launched his career.

Raimi spoke to an audience of about 90 people Tuesday in Harris Hall about his films, which mix comedy and horror, at an event organized by the School of Communication. Raimi, who directed the “Spider-Man” trilogy, discussed how young filmmakers can create original movies by mixing genres.

“I don’t really like horror movies,” Raimi said. “They scare me, so I had to learn how to make a horror movie. What I learned was the setup and the suspense sequence is actually kind of similar to what I do in my comedies.”

Raimi said when he first began making movies, he was interested in creating comedies. But he said producer Rob Tapert, who was Raimi’s college roommate, advised him to make horror films because they did best at the box office.

Even when he made horror movies, humor was still “part of his blood.” He said he has incorporated work from comedians like the Three Stooges in his horror films like “Evil Dead II.”

Communication Prof. Spencer Parsons, who moderated the event, said Raimi’s “anarchic comic progression” has remained throughout his work even as he began working on bigger pictures.

“He’s had a really interesting career because the style that he works in — that mixes genres and mixes tones together — is not generally what commercial Hollywood and commercial indie production now is after,” Parsons told The Daily. “Yet, he’s managed to carve out this place for his work and has even worked on this multi-million dollar trilogy.”

Raimi said mass audiences do not usually react positively to mixed-genre films, but there are still people who like the “unusual flavor” of movies that he produces because they want something they have never seen before.

He said sound is important to his films, adding that for horror films, sound contributes to half of the movie’s effectiveness.

“We want to give the audience the proper seeds to grow their own nightmare, and sound is such a great tool in that job because they hear something very unusual, and they have no choice but to imagine what that must be,” Raimi said.

Communication sophomore Elliot Kronsberg told The Daily he has been a fan of Raimi since kindergarten when he first saw Raimi’s adaptation of “Spider-Man.” He added that he found Raimi’s insights about sound in horror movies to be the most memorable.

Kronsberg said he has seen all of Raimi’s “Evil Dead” films and watches the television show based on the films, “Ash vs Evil Dead.” He said he appreciated hearing Raimi’s insights on the factors that go into making horror effective.

“It was interesting listening to him,” Kronsberg told The Daily. “I’m not really into making horror films, so I didn’t really think about (the importance of sound), but it makes a lot of sense.”

Later in the talk, Raimi spoke about his transition from directing low-budget movies like “The Evil Dead” to high-budget films like the “Spider-Man” trilogy. Raimi said he felt he had more control over the creative process when he directed movies with smaller budgets.

“In the low-budget pictures, it’s like you’re playing the harmonica or violin yourself,” Raimi said. “With these $200 million studio extravaganzas, it’s like you’re conducting the orchestra. You’ve got people that can play the piano better than you’ve ever dreamed, and you’ve got whole string sections, let alone a single violin.”