The Daily Northwestern • May 3, 2017 • https://dailynorthwestern.com/2017/05/03/campus/anubhav-dance-team-takes-national-championship-title-for-third-time/ 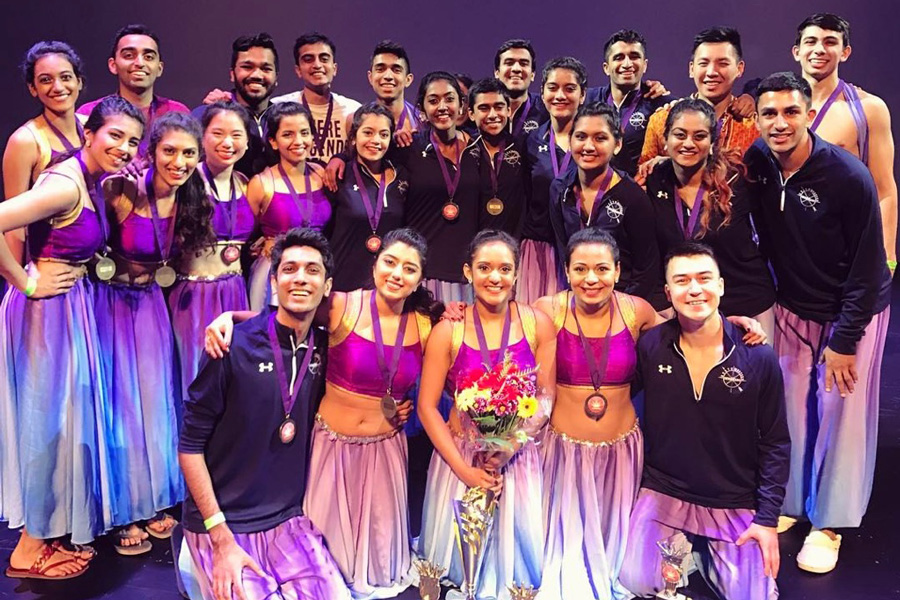 Anubhav poses after claiming the national championship title. The team placed first for the third time for their performance based on “Life of Pi.”

Legends, the official Bollywood Dance Championship, took place on April 15 in Los Angeles. In addition to taking first overall, NU’s team was recognized for best choreography and best costumes. Yuri Doolan, one of the group’s creative directors, was also named Best Male Lead. Ushasi Naha, one of the team’s captains, said she was excited to see the group’s hard work pay off.

“We have had a pretty successful season, so we’re really happy about that, but Nationals is always a whole new ballgame,” the Weinberg senior said. “We really didn’t have any kind of expectations, so winning was truly a dream.”

Before advancing to the championship, teams compete at various regional competitions which draw applicants from hundreds of teams across the country. The top 10 teams then advance to the final championship, said graduate student Hetal Patel, creative director and founding member of Anubhav.

During the fall, the team of about 25 dancers practices four times per week for two hours. In the winter — the main competition season — the group dedicates six days a week to practice, Naha said.

“The weeks leading up to a competition we expect a lot from the team,” she said. “We put in everything we’ve got to get the show as well as it (can) be.”

Each year, the team creates a seven to eight minute story that encompasses a variety of dances and songs, Naha said. This performance is then repeated at the various regional competitions and national championship, she said.

Patel said though many other teams have embraced hip-hop and pop culture in their routines, Anubhav deliberately works toward maintaining a “South Asian aesthetic.” Choreography, visuals, music and costuming is all influenced by South Asian culture, she said.

The group focuses its shows on themes that can spread awareness or have an impact on South Asian and other immigrant populations, Patel said. This year, Anubhav chose to do an adaptation of “Life of Pi” to present a narrative of the struggles and perseverance of immigrants in light of the “anti-immigrant rhetoric” of the presidential campaign, she said.

“We all sort of felt a sense of purpose and responsibility as Asian Americans and as second-generation immigrants,” Patel said. “We were sort of hoping to take ‘Life of Pi’ as an abstract and symbolic way to reclaim and tell this narrative about immigrants that’s been sort of taken away from us recently.”

Anubhav member Kirtana Sandepudi, said going through election night and watching the surprising results come in with the team was a “powerful experience.” Sandepudi, a McCormick freshman, said the “Life of Pi” theme was especially important to the group because the election affected all of its members.

The group wanted to use dance as a platform to present its emotions in light of the election, she said.

“Making (the theme) personal makes the entire experience so much more rewarding because in the end you know that you’re doing something you love but also speaking about something that affects you so much,” Sandepudi said.

Patel said the show gives Anubhav the opportunity to spread its message to a larger audience. In addition to performing in front of a large, live crowd, the group’s performance is also featured on YouTube. One of the team’s previous performances has nearly 100,000 views, she said.

“It’s crucial to us that we’re sharing a message that is actually meaningful,” Patel said. “It’s not just a dance… (It’s) trying to create something that’s actually bigger than really all of us.”