The Daily Northwestern • May 2, 2017 • https://dailynorthwestern.com/2017/05/02/city/human-services-committee-advances-plan-for-citizen-oversight-of-police/ 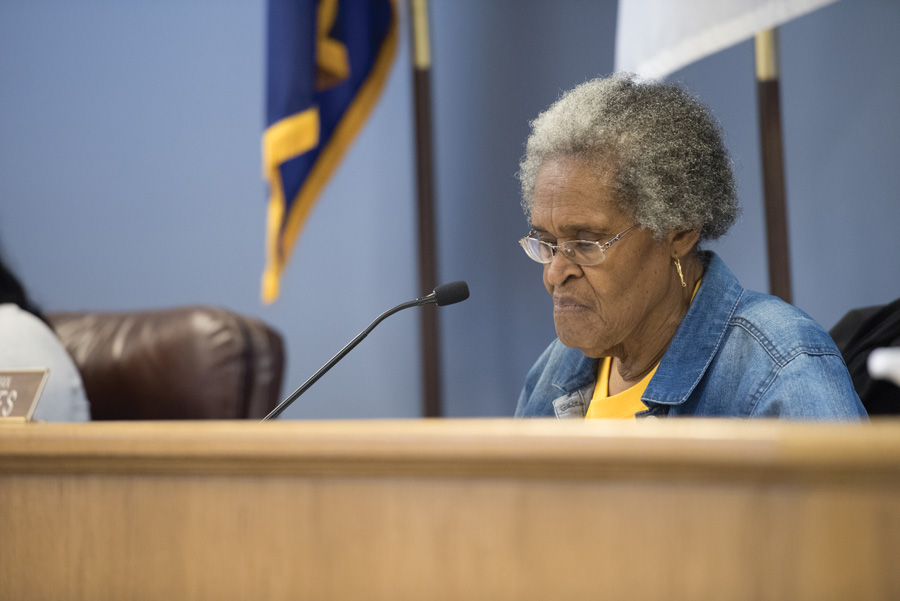 Ald. Delores Holmes (5th) attends a Human Services Committee meeting on Monday. Committee members reviewed a proposal for the parameters of a “Citizen Complaint Working Group” and will pass it along to City Council.

A proposal for the parameters of a “Citizen Complaint Working Group” was reviewed by members of the Human Services Committee on Monday and passed along to City Council for further deliberation.

Members of the Evanston Citizens’ Police Association, the Citizen Police Advisory Committee and other concerned residents held a series of five meetings starting in February to answer a series of questions regarding the proposed working group. Once created, the working group will be allotted six to nine months to compile findings and report back to the Human Services Committee.

The new committee will be tasked with assessing EPD’s current complaint review procedures and developing suggestions to increase transparency.

Attendees were tasked with looking into the possible goals, roles and responsibilities of the working group. In addition, they deliberated on the process of selecting its members, and what interests and demographics should be included in the group.

The report states that the goals of the new committee should be to remain “authentic and representative of community voices,” provide a “new structure for oversight and how citizens are heard” and be transparent and independent of City Council. The report also emphasizes the need for diversity, suggesting that members be representative of various groups and organizations throughout the city.

“This group should look like Evanston,” the report states.

Aldermen reviewed the findings at the meeting and voted to pass the recommendations on to City Council. Since a new City Council will take office on May 8, the final decisions regarding the working group and committee will be made by the new officials later in the month.

In addition to recommendations on goals for the committee, the report proposed the creation of an eight-member task force to coordinate and manage the member selection process for the working group. Members of the prospective task force have already been appointed.

Ald. Delores Holmes (5th) opposed the idea of a task force at the meeting. She said that this extra step would be unnecessary, and that applications for the working group should be submitted directly to the mayor.

Holmes and the other aldermen also proposed reducing the number of eventual working group members to nine, not counting a facilitator.

Carol Jungman, a prospective task force member, said the decision not to enact a task force was disappointing. She added that the task force was suggested to make a more solid recommendation to Council, and bring continuity to the process of creating a working group.

“The eight of us are probably going to meet and continue the work,” Jungman said. “We don’t need the blessing of the committee to do that. We’re all passionate about this and we’ll keep working on it.”

The number of traffic stops in Evanston rose by 1,199 from 2015 to 2016, according to data presented by Evanston Police Chief Richard Eddington at the meeting.

In 2015, EPD conducted 12,024 traffic stops; that number rose to 13,223 in 2016. Most traffic stops were moving violations, and the data showed that in both 2015 and 2016 roughly half of those stopped were white and a third were black. The percentage of Hispanic individuals who were stopped was roughly 10 percent in both years, and the percentage of Asian individuals remained at around 7 percent.

Eddington said that Evanston has entered into an agreement with the American Civil Liberties Union to search only with “reasonable articulable suspicion.”

Ald. Peter Braithwaite (2nd) noted the high percentage of searches of minorities when compared to their rates of being stopped in the first place.

“Overall, the black community — by percentage — is still over-policed in comparison to their white counterparts,” Braithwaite said.

Eddington said he agreed with Braithwaite’s concerns and sought to explain the reason for the demographics.

“Our job is to suppress crime,” he said. “Until the demographics of victims and offenders changes, I don’t think our stop data or search rates are going to change.”