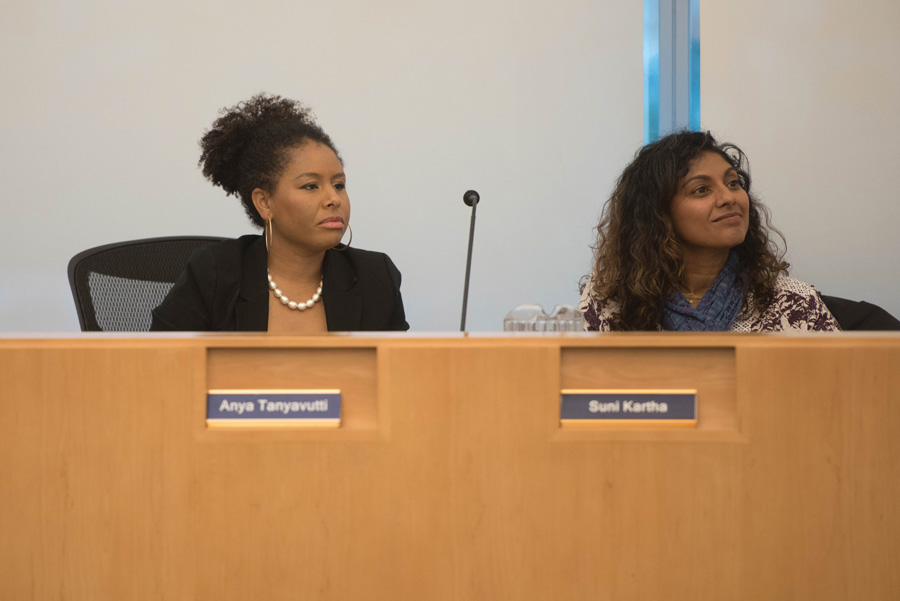 School board members Anya Tanyavutti (left) and Suni Kartha (right) at a District 65 board meeting. The school board Monday night elected Kartha and Tanyavutti as president and vice president.

The District 65 board elected Suni Kartha as its president and Anya Tanyavutti as its vice president during a special reorganization meeting held Monday.

Board members narrowly elected Kartha to serve a one-year term as president of the board, replacing Candance Chow, who has served since May 2013. Tanyavutti, who will now serve as vice president, ran unopposed to replace Claudia Garrison.

Tanyavutti told The Daily while traditionally the board president serves two one-year terms, it is not mandated. She said Monday’s decision was “historic” because this was the first time in recent memory that both leadership positions have been filled by women of color.

“It speaks to the national climate — people are engaged and want to be impactful in every way possible to ensure that we protect our democracy,” Tanyavutti said.

Kartha told The Daily she and Tanyavutti ran their campaigns on inclusivity, transparency and equity. She said it is her goal to work with the rest of the board to ensure that everyone’s voices are heard.

“District 65 is on a path to recognize and address systemic inequities in our schools,” Kartha wrote in her statement of nomination for board president. “It is my priority to ensure that we continue on this journey in a robust and meaningful way.”

During Monday’s meeting, several Evanston residents voiced their support for Chow rather than Kartha — highlighting the former president’s success on passing the District 65 referendum in April and her leadership skills.

“There is no one better than Candance to continue to lead the board through this critical post-referendum period,” Evanston resident and District 65 parent Andrea Mainelli said. “She has the experience of having guided the residents in the district through the strategic planning process.”

The referendum passed with more than 80 percent of the vote and will raise property taxes by about $450 dollars annually for the average Evanston property owner. The increased taxes will allow the district to work on improving student achievements, investing in technology and keeping class sizes small.

Tanyavutti said she recognizes “all of the voices” that supported Chow as president, but hopes to move forward and work together.

During the meeting, Evanston residents and board members also paid tribute to the two retiring school board members, Garrison and Tracy Quattrocki.

Garrison spoke about her time on the school board and her decision to run at the meeting. She said after 11 years of teaching, she still felt she could to contribute more to Evanston’s educational community.

“Serving on the school board for the past eight years has been a privilege to engage in such an important conversation and to have my voice heard,” she said.

Two new board members, Lindsay Cohen and Joseph Hailpern, were sworn in Monday evening after paying tribute to the retiring members.

Board members also discussed committee appointments and school liaison assignments for the upcoming year but decided to wait to finalize the assignments at an upcoming meeting later this month.