The Daily Northwestern • May 1, 2017 • https://dailynorthwestern.com/2017/05/01/campus/friends-remember-mohammed-ramzan-as-inquisitive-driven/ 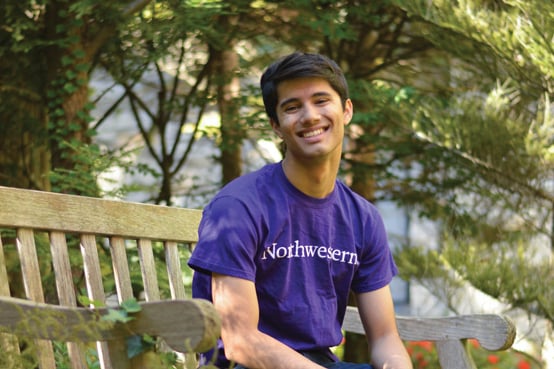 Mohammed Ramzan, who passed away in April. Friends remember him as a curious, passionate student with an interest in medicine.

One night, Mohammed Ramzan and his friend Samantha Flood were forced to walk back to campus from the Howard CTA stop. Their phones had no battery left, and they weren’t able to call a taxi.

Despite the cold and rain, Flood said Ramzan didn’t hesitate before taking off his jacket and offering it to her.

“Even though it was cold outside and it was 4 a.m., he still walked me back to my dorm,” Flood, a Weinberg freshman, said. “That was the first time we realized like, ‘Hey, I’m really close to this person.’”

Ramzan, a Weinberg freshman, passed away April 10 after falling off a nine-person shell during a Northwestern men’s crew team practice on the North Shore Channel. The Cook County Medical Examiner ruled his death an accidental drowning.

Flood said Ramzan had taken up crew as part of an intense exercise routine he created to treat his long-term scoliosis. Ramzan would work out six hours a day, she said, while balancing a job as a cashier at BopNGrill, a restaurant in Rogers Park.

Ramzan took a medical leave from NU during Fall Quarter to take care of his mental health, Flood said. Though he returned to Chicago in the winter, he did not resume taking classes, she said. Still, he was a member of Northwestern’s men’s crew team, Flood said.

“He did this out of the fact that he wanted to strengthen his back muscles, because he didn’t have insurance and he couldn’t see a doctor,” Flood said. “He made the best out of what he had more than I believe anyone else could.”

Flood remembers Ramzan as someone who always strove to be better — at work, in class and with his health. All the motivation he had came naturally to him, she said. Ramzan graduated with honors from Thomas Jefferson High School in Auburn, Washington. A National Merit scholar, he finished high school with nearly perfect SAT scores.

Ramzan was the sweetest person Flood had ever met, she said. The pair first spoke through the QuestBridge Scholars Network.

“When I met him, I literally glued to him. I just followed him around,” she said. “He was just my best friend.”

In addition to being a Quest Scholar, Ramzan was a member of the Muslim-cultural Student Association and a participant in the Freshman Urban Program at NU. His FUP counselor, Udita Persaud, remembers him as “the happiest human being.”

Persaud said Ramzan was always grateful for the opportunities he was given. He was inquisitive and loved asking deep questions about everything, Persaud said. The two bonded over their love for medicine, she added.

“It was really cool to talk to him about why we both wanted to go into medicine, or why medicine is a career that we were both interested in and how he really wanted to help a lot of people, especially LGBTQ individuals,” Persaud, a Weinberg senior, said.

Holly Cheung, a freshman at the University of Washington and Ramzan’s close friend, said he was a supportive, smart and polite friend who “could really get you to think.”

“We had these conversations about real-world issues, and I was just really surprised at the amount of knowledge he had about places overseas and issues that weren’t gaining exposure over here,” Cheung said.

Flood said Ramzan’s dream was to become a doctor and a researcher — he wanted to treat AIDS and help the LGBTQ community. He met Cheung when the two volunteered at Seattle Children’s Hospital, something Ramzan did throughout high school.

Cheung said the first time she met Ramzan, he helped her find an office in the hospital where she needed to be.

“Even though it took him two hours to get home … he still took the time to take me there and made sure everything was okay,” she said.

After stopping to help her, Ramzan missed his bus home and had to wait an extra half hour for the next one, Cheung said.

Ramzan and his mother immigrated to the United States from Pakistan when he was a child, Flood said.

Cheung said Ramzan dreamed of helping others and expressed interest in Doctors Without Borders to help those from similar backgrounds.

“He wanted to become a doctor because he wanted to help other people,” she said. “He was very passionate about that.”

This story was updated to clarify when Ramzan joined Northwestern’s men’s crew team.