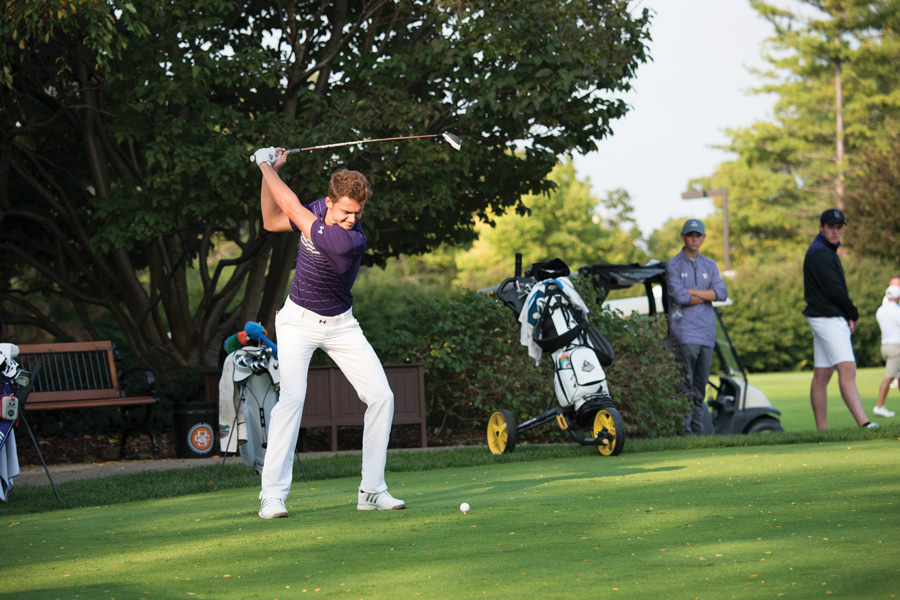 Ryan Lumsden swings. The sophomore led the Wildcats to a second place finish at the Big Ten Championships this weekend.

Once again, one poor round cost Northwestern significantly.

If only the final two rounds of the Big Ten Championships counted, the Wildcats would have beaten No. 8 Illinois and won the tournament. But the Fighting Illini outshot NU by 17 strokes in the first round, essentially putting away the tournament before it started.

“Illinois just played a great round,” coach David Inglis said. “We weren’t quite on our game the first day. We weren’t sharp from the beginning, and it cost us a chance to play for the championship.”

The Cats struggled across the board Friday, including a rough day from junior Dylan Wu, who had hoped to compete for the overall championship.

He was three-over par after the first round, 10 strokes back of Illinois’ Dylan Meyer, who shot a course record of 63 on the first day. Meyer eventually won the tournament at 5-under-par.

Wu turned it around over the last two days, shooting a 3-under 67 on Sunday and finishing in ninth place at 1-over for the tournament. Sophomore Ryan Lumsden finished in a tie for second place after carding rounds of 69, 69 and 68.

Lumsden said after a tough Boilermaker Invitational, in which he finished behind all of his teammates, he worked hard during the week to get his game back on track and played with a newfound sense of confidence.

“I was confident but also patient,” he said. “When I made a mistake, I knew it wasn’t the end of the world, and I was able to make a good couple birdies. … It was a good tournament, and it gives me a lot of confidence going into the next couple of weeks.”

After the first round, NU sat in third place, with no realistic chance of catching Illinois. The Cats did the next best thing, obliterating the rest of their competition and finishing at five-over, 10 strokes ahead of third-place Ohio State.

Inglis said he still wasn’t satisfied with the final result.

“We came here to get a win,” he said. “Unfortunately we didn’t get that done, but at the same time with the position we were in after round one, it was always going to be tough.”

NU has now finished in second or third place in its last four tournaments. At the Redhawk Invitational, the Cats blew a six-stroke lead with just three holes to go. At the Boilermaker Invitational, NU faltered in the opening round but outplayed the field in the second and third rounds, eventually finishing in third place.

The Cats had hoped to compete with the Fighting Illini for the Big Ten title, but instead Illinois cruised to its third straight championship. NU will now shift its focus to the NCAA Regionals; it will learn its destination Thursday.

Wu said the team needs to have each player perform at a high level at the same time.

“We haven’t had one round where every player shoots a good number,” Wu said. “When we go to regionals, we’re going to be with a bunch of good teams, but I think we’re going to have that mindset of, we’re going to try to win the tournament.”