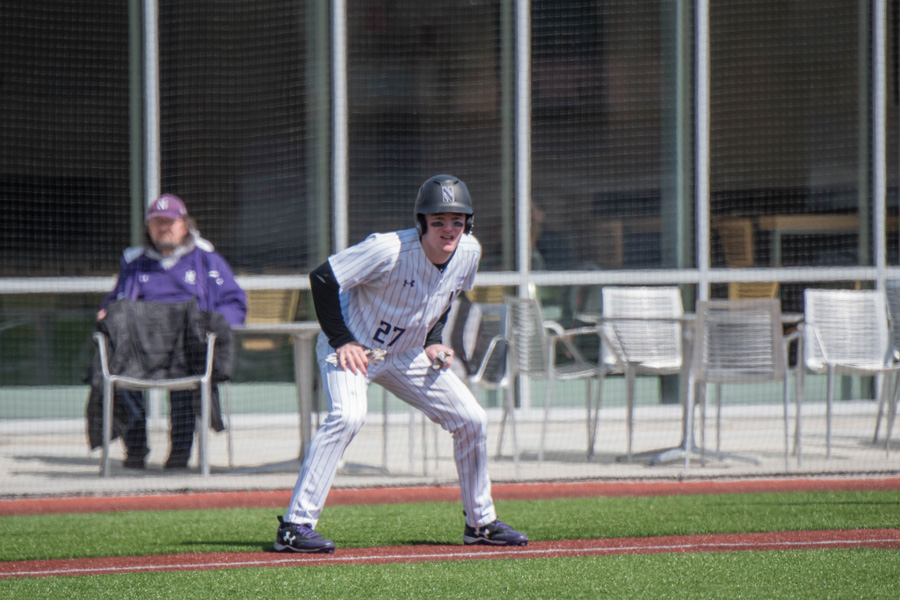 Leo Kaplan gets his lead. Despite the freshman’s exploits, the Wildcats lost two of three to Michigan State this weekend.

The weather and quality of play were inconsistent all weekend as Northwestern dropped two of three to Michigan State in a showdown between mediocre Big Ten teams.

After dropping the first game of a doubleheader 8-1 on Friday, the Wildcats battled back and took a tightly contested second game 3-2. On Saturday, things went downhill quickly for the hosts in an ugly 13-5 loss.

“Friday, we were a little bit more competitive,” coach Spencer Allen said. “(Saturday), we just quit. They beat us, and they got a big hit in a big inning, and we quit.”

NU’s offense sputtered overall on the weekend, putting up only nine runs across the three games. Senior Joe Hoscheit, who had been powering the Cats offense in the previous two series, picked up only one hit in the series.

The bullpen also struggled on the weekend, surrendering 15 runs in the two NU losses. Freshman Josh Levy was the main culprit Saturday as he was charged with four runs while recording only two outs in the fifth as the Spartans blew the game open.

“We may have gotten beat, but it didn’t need to be 13 runs,” Allen said. “You give up 13 runs by not continuing to play the game, not controlling the running game. They quit, and they know it.”

The first game Friday started well for the Cats, as senior Cooper Wetherbee pitched 5 scoreless innings and Hoscheit picked up an early RBI to give the hosts the lead.

The sixth was a different story, however, as Wetherbee recorded only one out before being pulled for fellow senior Pete Hofman. He allowed a home run later in the inning, and the Spartans never looked back from their 3-1 lead, adding five more runs in the late innings.

“We’ve just got to find good pitches to hit,” Hoscheit said. “I just didn’t swing at the pitches I wanted to, and I think that goes for a lot of guys.”

After collapsing in the first game, NU turned in an impressive bounce back performance less than an hour later, pulling together a 3-2 victory on a clutch RBI single from Hoscheit in the eighth inning to score freshman infielder Alex Erro.

Fellow freshman Hank Christie was solid on the mound, pitching 5.1 innings while allowing only one run on four hits. Another freshman, Sam Lawrence, came in to finish the sixth and allowed just one run of his own in 3.2 innings of work.

“It was nice to see the freshman class do well,” freshman outfielder Leo Kaplan said. “We’re the future of the program, and we’ll be here for four more years. It’s nice for everyone to get an opportunity to get out there.”

Saturday’s game was close to start, but the dominant fifth inning from the Spartans ended any threat of a Cats series victory. Freshman starter Matt Gannon got into trouble early in the inning, and Levy encountered further struggles.

NU’s Big Ten Tournament hopes are now seriously on the ropes. Allen’s goal coming into the final four conference series was seven more conference wins, but after two losses this weekend the Cats will need to go 6-3 to close conference play if they hope to reach that mark.

“In order to have a chance, we have to win every series,” Hoscheit said, “so that’s our goal going forward.”