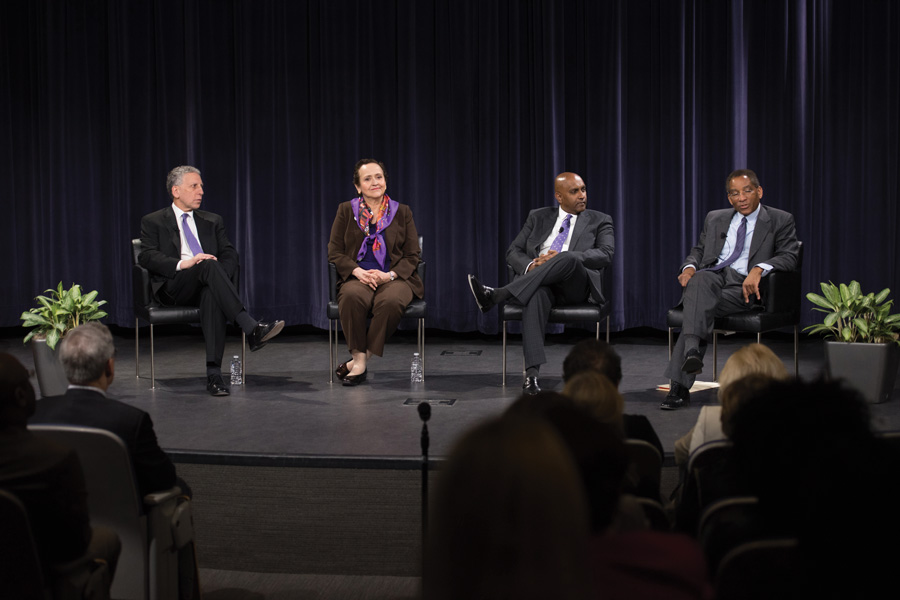 Northwestern reaffirmed its opposition to President Donald Trump’s travel restrictions last week after an amicus curiae brief was filed in the Ninth Circuit Court of Appeals.

Hawaii filed a lawsuit Feb. 3 against Trump’s Jan. 27 executive order, which restricted travel to the United States from people of seven Muslim-majority countries, causing delays for travelers with valid visas. Trump signed a revised order on March 3, whose terms lowered the number of barred countries to six and revoked and replaced the earlier order on March 16. The case was put on hold in light of a similar suit in Washington, but litigation resumed after the second order was issued.

Northwestern joined 30 other universities in filing a brief supporting Hawaii’s lawsuit in opposition to Trump’s immigration policy. The brief, filed April 20, said the order threatens the institutions’ “interest in ensuring that individuals from around the globe can continue to enter the U.S. and share their unique skills and perspectives.”

The University previously joined another amicus curiae brief Feb. 13 along with 16 other universities in support of a lawsuit filed by New York attorney general Eric Schneiderman against Trump’s initial executive order.

NU decided to join the brief because the order would limit the University’s ability to recruit internationally, said vice president and general counsel Philip Harris. According to University data, 49 students and 22 scholars at NU during the 2016-17 academic year are from the six countries affected by Trump’s executive order.

Harris said NU has been working in collaboration with a large group of private universities to address the executive order. Jenner & Block, a Chicago-based law firm, filed the brief on behalf of the universities after collecting information about the order’s potential impact on the institutions, Harris said.

International Office director Ravi Shankar said his office is leading the response to the executive order in collaboration with the Office of General Counsel and Office of the Provost.

“We’re taking the lead on this, but not by ourselves because this has to be an institutional and strategic response,” he said.

Shankar said his staff is doing its best to accommodate students and faculty affected by the new immigration policies. In addition to hosting Q&A sessions, the office worked with Counseling and Psychological Services to respond to student concerns, he said.

The University will also connect students and faculty to immigration attorneys and cover their expenses, Harris said.

“If someone presents concerns to us, the International Office will work with us to make sure their needs are addressed,” he said.

The new order excludes Iraq from the original list of countries with restricted travel to the United States. Syrian refugees will no longer face an indefinite ban, though all people from the six mentioned countries will face at least a 90-day ban. Additionally, all people with valid visas face no restrictions, and waivers will be granted on a case-by-case basis.

Harris said the revisions don’t affect the University’s approach because the students impacted by the order are not from Iraq.

Communication Prof. Hamid Naficy said the order is “prejudicial and wrong-headed” because it does not restrict travel from Saudi Arabia, where most of the September 11 attackers held citizenship. The policy targets people with specific religions and doesn’t address the fact that U.S. intervention is the cause to some of the conflict in these nations, he said.

“In many ways, the U.S. foreign policy is the culprit in a lot of these displacements and wars,” he said.

Despite these efforts, some students have raised concerns about the timing of Northwestern’s response to the executive order, Shankar said.

Ana Acevedo, a McCormick junior and president of the Immigrant Justice Project, said when it comes to immigration issues that affect students, the University has a “history of not responding quickly enough.”

Shankar said the University didn’t want to respond to the order without first examining the content and knowing exactly how it affected the institution’s community.

Harris said he thinks NU responded “aggressively” and has been “anything but slow.”

“We certainly are responding within the same time frame of other institutions,” Harris said.

Acevedo also said she hoped the University would take a clearer stance in emails sent to students. Students who call NU their new home need to feel that the administration is at their side and will fight with them, she said.

Past emails to students addressing the order are structured in a way that leaves a lot up to interpretation, Acevedo said. The emails are also careful to not offend anyone who would disagree with NU’s commitment to helping students, she said. The email response is “too political” to make students feel safe, Acevedo said.

Harris said he thinks “there’s been no ambiguity about what our position is on this.”

Acevedo also voiced the need for the University to declare itself a sanctuary campus. Not coming forth and making this declaration is harmful, even if the institution acts exactly like a sanctuary campus, she said.

University President Morton Schapiro said he thinks he made his position clear regarding NU’s response to Trump’s immigration policies.

“We are not just sitting around and waiting for Washington to dictate things that are going to affect our community,” Schapiro said. “We are actively involved in lobbying to make sure that we are not adversely affected.”