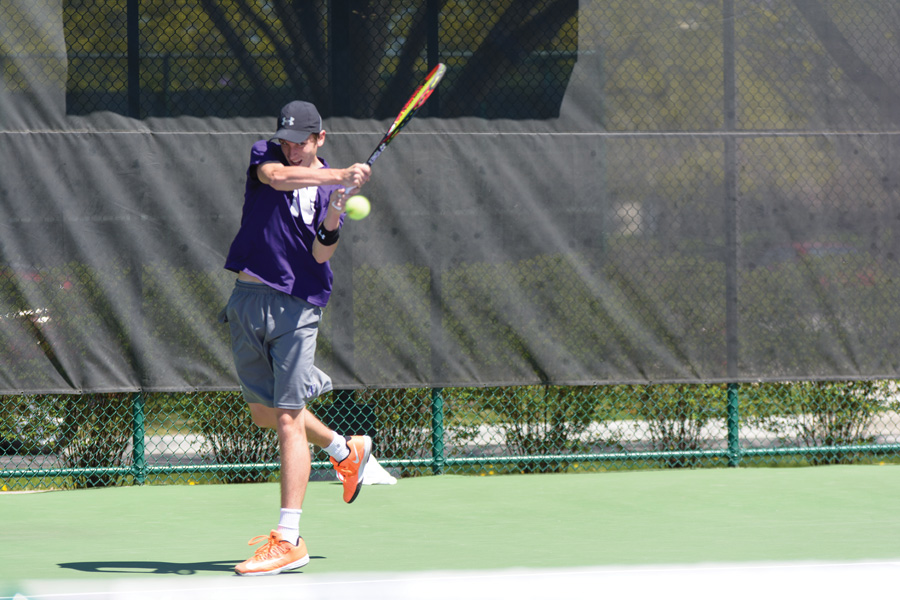 Ben Vandixhorn completes his shot. The sophomore helped the Wildcats to a win in the first round of the Big Ten Tournament.

Northwestern advanced to the second round of the Big Ten Tournament thanks to commanding wins by its younger players.

“It was a really competitive match in singles, and we had three guys really step up in singles to allow us to win the match,” coach Arvid Swan said.

The match began with a competitive doubles point the Cats eventually secured. Senior Strong Kirchheimer and freshman Dominik Starý grabbed a win at No. 2, and freshman Chris Ephron and sophomore Michael Lorenzini secured the point with a 6-3 decision at the No. 3 court.

Underclassmen continued to lead the charge in singles play, picking up straight-set wins at courts No. 4-6 to secure an easy NU win. Sophomore Jason Seidman scored a quick 6-0, 6-2 victory at No. 6 — his 12th win in his last 13 completed matches.

NU was nearing straight-set victories at No. 1 and 2 singles when the match was clinched, while senior Sam Shropshire was tied early in the third set at No. 3.

Next up for the Cats is a rematch with the Badgers, a team they lost to 4-2 roughly a month ago. On the line will be a berth in the tournament’s semifinals and a likely date with top-seeded Ohio State.

“We’re really excited to play Wisconsin again,” Swan said. “For us it’s a great opportunity to test ourselves against another quality team in the Big Ten, so I’m excited to have the opportunity.”