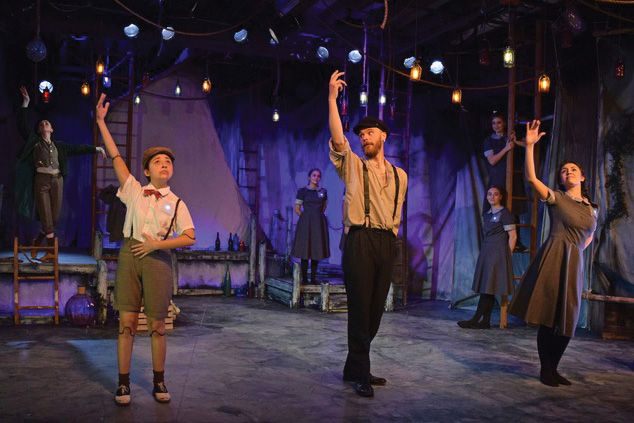 Left to right: Julissa Contreras, Chris Chmelik and Haley Bolithon act in a production of “Pinocchio.” Northwestern alumna Sarah Cartwright (Communication ’15) also acts in the play, which runs until May 14.

Sarah Cartwright said she is used to being type-casted as a scrappy orphan. But for the next month, she will instead portray a dead cricket who serves as the voice to a puppet in Neverbird Project’s production of “Pinocchio.”

“Pinocchio” tells the story of a puppet who is brought to life by a dead girl to give a son to Geppetto, who is grieving the loss of his wife.

“It’s just been really fun,” Cartwright (Communication ’15) said. “I’ve been really fortunate to be working really steadily for the past year, which is awesome.”

The Neverbird Project, which put on the play, is a youth theater company for deaf and hearing children that incorporates sign language into its shows. All of the actors, including Cartwright, had to learn sign language for the play.

The show is told through sign language and speaking. Some actors are deaf and some characters, such as Pinocchio, never speak and have other characters speak for them, said co-director Levi Holloway.

“We always have to find the access point with deaf and hearing integration on stage,” Holloway, who co-directed the play with Katy Boza, said. “It’s about telling the story in two ways simultaneously, and Pinocchio has an interesting access point in being actually vocalized through the Cricket.”

Holloway first saw Cartwright at the House Theatre of Chicago in “Punch and Judy,” a puppet show, and said he wanted to work with her. Cartwright starred in Holloway’s play, “The Haven Place,” at A Red Orchid Theatre before acting in “Pinocchio.”

Boza said this is the first time a Neverbird Project production incorporated adult actors in its play. Usually, the company just works with schools, so having a wider range of ages is fun, she said.

Cartwright said she has performed in many plays made for young audiences. She said she learned a lot about children’s theater during her time at Northwestern.

“My philosophy on theater is you’re always going to be a better artist if you’re exercising your brain in a lot of different ways,” she said. “Being at Northwestern allowed me to take a lot of art classes and economics, and all of this stuff that has woven its way into the way I look at theater.”

The show runs until May 14.