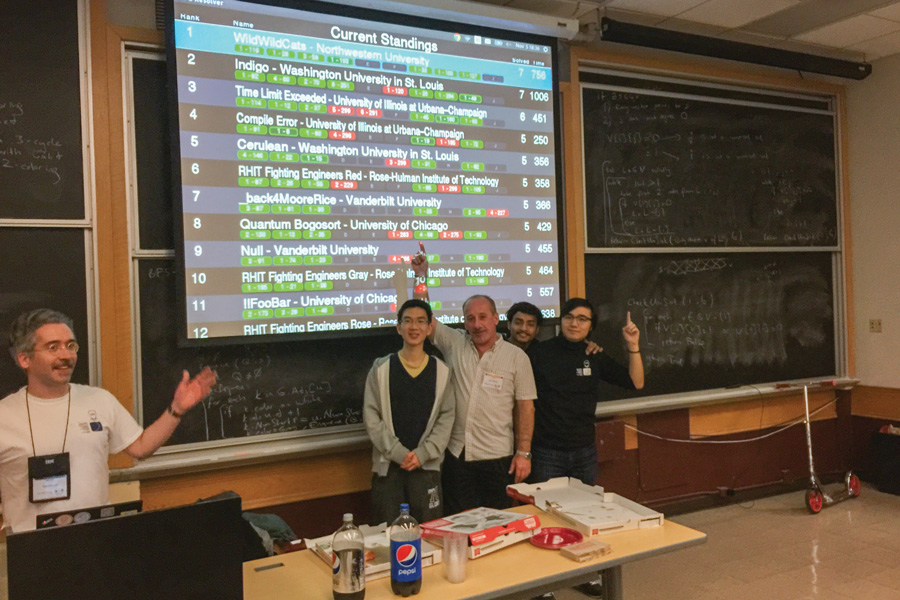 A team of three Northwestern students — who call themselves the WildWildCats — will advance to the World Finals of the Association for Computing Machinery International Collegiate Programming Contest in May. The team won first place out of more than 100 teams at the regional competition held at the University of Chicago in November.

The Association for Computing Machinery International Collegiate Programming Contest is a worldwide competition that brings together teams of three students from universities across the country to compete and solve about 10 problems in less than five hours. The problems typically deal with real-life scenarios involving complex algorithms, said McCormick Prof. Goce Trajcevski, the team’s coach. Together, the group must develop and then successfully code an algorithm for each problem.

The competition places constraints on the running time and memory that a program is allowed to use, so teams must work to produce solutions that are both accurate and efficient, Dutta said. An online server determines whether the submitted programs are correct, and teams are then ranked depending on how many problems they complete and how many penalties they incur, he said.

“The time limit (to run a program) is usually like a second, and the size of the problems are huge,” Dutta said. “The number of data points is roughly a million, so your solution has to be really efficient. … First you have to come up with an efficient algorithm, and then you have to actually implement it.”

The competition, sponsored by IBM, seeks to foster creativity, teamwork and innovation, and allows contestants to test their ability to perform in high-pressure situations, according to the competition’s website. The contest has been around for more than 40 years and is considered the oldest and largest programming contest in the world, according to the website.

Feng said participating in the competition could enhance career prospects for undergraduates. Many companies, including Google, Facebook and Microsoft, hold coding contests and look favorably on students who perform well in such competitions, he said.

“For undergraduate students who are willing to become employees in the industry, I think this is a good opportunity … to put what you learned in class to use,” Feng said.

“When I have free time, I enjoy solving hard problems and programming for fun,” Zhang said. “The other guys are Ph.D. students in theory and … I think they do have more experience in terms of algorithms and they can help me with … coming up with a solution.”

Trajcevski said the group’s success is attributed to “a mix of circumstances,” one being that some members had prior experience competing in the International Collegiate Programming Contest. As a coach, Trajcevski said, he helped the groups prepare for the competitions by suggesting practice sources and helping them study computational topics.

Trajcevski said he hopes to implement a course to specialize in competitive programming so NU can create a “culture” for competing at the International Collegiate Programming Contest, something many of its competitors already possess.

“What I’m trying to do is create a little bit of a tradition for it at Northwestern because all the top-scoring teams in the world, that’s what they have,” he said. “They have a tradition, they have a culture. We have the gifted students on our side.”