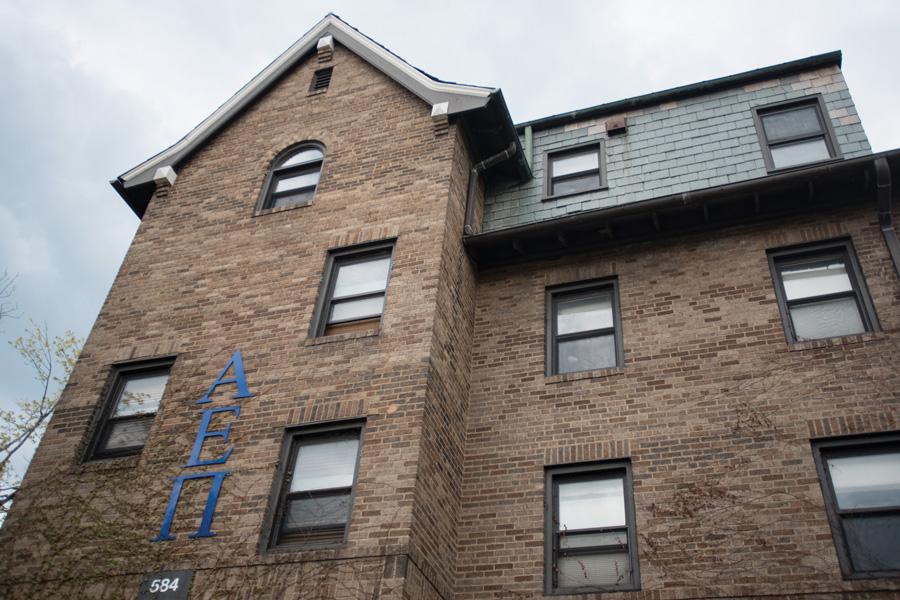 The Alpha Epsilon Pi fraternity house on Northwestern’s campus. This year’s Dog Days, AEPi’s annual philanthropy, will donate profits to the American Foundation for Suicide Prevention in honor of Scott Boorstein, a member who took his own life in September.

“He was so amped,” the Weinberg senior said. “He was really wacky, shouting during Dog Days, and everyone just loved having him around.”

This year’s Dog Days will honor Boorstein, who took his own life on Sept. 2. AEPi plans to donate profits to the American Foundation for Suicide Prevention, an organization that raises awareness, funds research and provides resources to those affected by suicide. Members of the fraternity will grill and sell hot dogs around campus from May 1 to 5.

Marc Boorstein told The Daily that he believes Scott Boorstein’s OCD symptoms flared up and became uncontrollable the day he died.

The Boorstein family is currently raising money for the International OCD Foundation. According to its website, the foundation works to help individuals affected by OCD to live full and productive lives.

AEPi President Aaron Kaplan said although the words “suicide” and “prevention” have a negative connotation, he hopes Dog Days will be “overwhelmingly positive.” As members of the fraternity interact with the Northwestern community throughout the week, the McCormick sophomore said he wants AEPi to be “an uplifting spirit on campus.”

Kaplan said this event shows how AEPi has grown as an organization since Boorstein’s death. Members of the fraternity have been able to think deeply about their relationships with each other and with the community, he said.

“We’ve gained a kind of more mature perspective on what the function of our organization is,” Kaplan said. “It’s to provide a community, a support network for both the people in it and for the people on Northwestern’s campus.”

Aside from donating to the American Foundation for Suicide Prevention, Kaplan said AEPi started several other initiatives concerning mental wellness since Boorstein’s death.

The fraternity has held internal programming to educate members about mental health, and it hosted a panel discussion on mental health in Technological Institute on Tuesday. The chapter also has a position focusing on protecting and maintaining the mental wellness of the chapter, Kaplan said.

In addition, Kaplan said AEPi will participate in the Chicagoland Out of the Darkness Walk — a fundraiser held by the American Foundation for Suicide Prevention to spread awareness about suicide — in September.

Attending the walk would give the fraternity an opportunity to celebrate members’ memories of Boorstein and help them have a meaningful interaction as a group, Kaplan said.

Weinberg junior Jake Phillips said Boorstein, his friend, embodied all the qualities associated with Dog Days. Boorstein loved volunteering, had a positive attitude and was willing to step up whenever it was necessary, Phillips said.

“He was always just really excited and energetic about (Dog Days),” Phillips said. “It is tiring and a lot of work, so having someone there with the right attitude about what we’re doing is always a good thing.”

Polotsky said he looks forward to seeing more people come together in honor of Boorstein, as it is a testament to the impact his friend had on people’s lives.

He will always remember Boorstein as a selfless person, Polotsky said, especially when it comes to volunteering for a good cause. During holidays and birthdays, Boorstein would often ask others to make donations under his name rather than ask for presents, Polotsky said.

“He didn’t ask for a birthday present one year,” Polotsky said. “Instead, he asked that I donate the proceeds to Dance Marathon. He had been doing Dance Marathon for two years; this year would have been his third. He’s really into charity events and puts others before himself.”

Ali Boorstein, Scott Boorstein’s sister, said she hopes this year’s Dog Days opens up a discussion about mental health, especially because she realizes how many NU students struggle due to stress and pressure.

“Scott’s passing saved a lot of these kids in a way that they didn’t even know they needed to be saved,” she said. “Now they’re more aware of mental illness and the way it can affect not just one person but everyone. Everyone was really shaken by this.”

Dog Days is not the only philanthropic event being held to honor Boorstein and his active involvement with charities. The Boorstein family and several of Scott Boorstein’s friends have started a movement, “Selfless for Scott,” which makes donations to a variety of charitable causes in his name.

For Boorstein’s birthday in February, about 200 people gathered to pack meals for the homeless at the AEPi fraternity house on Northwestern’s campus, Ali Boorstein said. The meals were then dropped off to homeless shelters in the Chicago area, she said.

This summer, volunteers plan to pack more meals and paint a mural for Scott Boorstein in an underprivileged area, his sister said.

Phillips, who participated in the meal packing for Boorstein’s birthday, said attendees included family and friends of the Boorstein family as well as alumni from Chicago and beyond.

“I think he’d be really happy that we’re rallying around his name to do something good,” Phillips said.

This story was updated with additional information from Marc Boorstein.