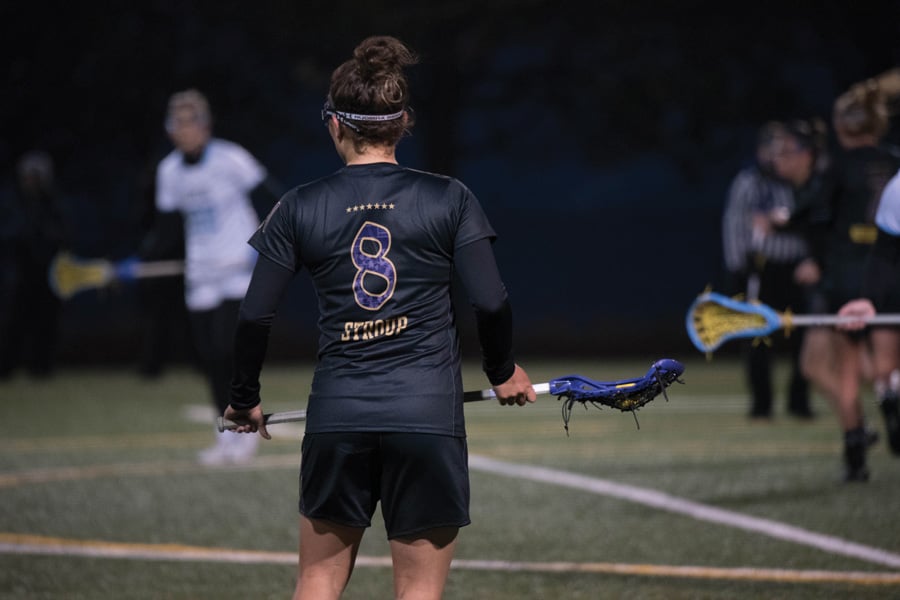 Danita Stroup cradles the ball. The senior attacker and the Wildcats face a tough test Thursday against No. 1 Maryland.

Coach Kelly Amonte Hiller won two national titles and was named ACC Female Athlete of the Year during her playing days at Maryland, but the former star attacker is long removed from her playing days — and from her last win over her alma mater.

The No. 14 Wildcats (9-7, 4-1 Big Ten) haven’t beaten the No. 1 Terrapins (16-0, 5-0) since 2012 — when NU won the national championship — and Maryland is still undefeated against the Cats since joining the Big Ten. However, NU will have a chance to get the coveted win Thursday, and a piece of the Big Ten title, as the team hosts the Terrapins for its regular season finale.

In Maryland’s three games against the Cats since joining the conference, the Terrapins recorded a plus-36 goal differential against NU, scoring at least 16 times in each matchup. But last season, the Cats took a step in the right direction, falling in a narrow 12-9 decision in the Big Ten Tournament final.

The Cats were in a similar position last year, experiencing a rollercoaster season before finally finding success in the Big Ten Tournament. But now, the team is without star attacker Kaleigh Craig, to graduation, and junior midfielder Selena Lasota, to injury. Lasota has missed most of this season.

Without Craig and Lasota, the two highest scorers on the team last season with a combined 103 goals, the Cats have turned to senior attackers Christina Esposito and Danita Stroup to pick up the scoring load.

Esposito has emerged as the face of NU’s offense, tallying a team-high 39 goals. She said the attack has had to adapt throughout the season, dealing with changing and rotating personnel.

“There was a little patch during our season where you could see our offense slumped,” Esposito said. “With Selena being out, we were trying a couple things and changing some people around. The attack has been through a lot.”

As a result of faster ball movement, the Cats have had scoring contributions from 16 different players and gotten shooters like Stroup — who has converted nearly 80 percent of her shots on goal this year — open on the crease. But the offensive production still doesn’t touch last year’s, when 21 different players put the ball in the net and five tallied more than 20 goals.

Stroup said the change in the offense has had its growing pains, but the transformation has allowed for a more spread out scoring distribution.

“We’ve really focused on our ball movement and getting everyone involved,” Stroup said. “If you look at the shots and the people that are scoring, it’s pretty much everyone — midfielders, attackers — it’s not one specific person and that’s helped.”

A win Thursday would go a long way in assuring that the Cats’ offensive changes are working. But the game against Amonte Hiller’s alma mater will be a daunting task, as the Terrapins have only lost one game in nearly two years.

Amonte Hiller said the team will have to come out with a fire. But at this point, it’s up to the players to get their coach her awaited revenge win.

“Our team is capable of playing with anyone,” she said. “We haven’t come out with as many wins as we wanted to, but as of late we’ve been doing well.”