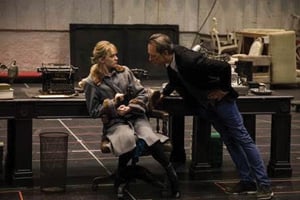 Lyric Opera singers rehearse for the upcoming production of “My Fair Lady.” Two Northwestern alumni and an NU professor will perform in the musical.

The Lyric Opera of Chicago will re-create a Parisian version of the timeless Broadway musical “My Fair Lady,” a large-scale production that includes a chorus of more than 50 singers.

“My Fair Lady” — a musical stemmed from “Pygmalion,” a play by George Bernard Shaw based on ancient Greek mythology — centers on phonetics and speech professor Henry Higgins, who wagers that he can train uncouth flower girl Eliza Doolittle to pass for a noblewoman at a party. The show opens Friday at the Lyric Opera.

Will Skrip, (Communication ’11) who performs in the chorus of “My Fair Lady,” said everything from the sets to costumes to lights included in Lyric’s rendition of the musical is from a Paris production of the show that was created a few years ago. Lyric is collaborating with those directors, designers and choreographers from Paris for the performance.

Essentially, Skrip said, the show plugs an all-new cast into the Paris rendition, which is different from what he has done in the past.

“A lot of it is already sort of established and set up and perfected, so we’re just being thrown into that framework,” he said. “It’s the first time I’ve ever done anything like that, and it’s a very different sort of process.”

Janet Farr (Communication ’89) plays the maid of Higgins’ mother and is also in the chorus. This season marks Farr’s 30th singing in the chorus at the Lyric Opera, she said. For the last five years, Lyric has been performing one Broadway show per season, Farr said. This is in addition to the eight operas that are typically performed each year.

Farr, who graduated from Northwestern with a degree in communication and speech disorders, said she relates to the plot of the show very strongly due to her academic background.

“It does feel like I’m coming back full circle to this work because I grew up with it,” she said, “and also (because of) the fact that I’m a speech pathologist and I help people learn to speak and speak clearly. It resonates with me.”

Communication Prof. Cindy Gold stars in the show in the role of Mrs. Pearce, Henry Higgins’ housekeeper. Gold taught Skrip for three years while he was a student at Northwestern.

Skrip described performing alongside his former teacher as “fulfilling” and “comfortable.” He called Gold a teacher and a friend.

“It’s great to be able to see her process and to see her working because obviously she has a huge hand in the way that I learned to be an actor,” he said. “It’s really fun because we have such a long history together, and it’s really nice just to have that very familiar face in the crowd.”

Gold also performs alongside a few of her former students who were in her acting class for three years, adding that there’s “very little that’s better.” At NU, the theater department requires faculty to be active in the art they teach, she said, and she hopes that former students can eventually work alongside faculty.

Gold described the Lyric Opera’s production of “My Fair Lady” as “avant-garde” with a modern feel to it. She said the set is sparse — there is only one chair in the main set, Higgins’ house.

“It’s a very different way of approaching ‘My Fair Lady,’ but it’s kind of fascinating,” Gold said. “Everyone thinks of ‘My Fair Lady’ as that old (chestnut) and I think this production sheds a little bit of new light on it in a very modern way.”

Lyric assistant director Elise Sandell said preparing a musical is very different from an opera. This is her first time working with the Lyric Opera on a musical, she said.

“The kinds of performers who interpret text without having to sing it all the time are very different from opera singers, whose voices are trained in a really specific way,” she said.

Sandell said it has been fun for her to watch the actors’ performances grow and change as they delve deeper into the process and become more detail-oriented.

Skrip said the best part of working at Lyric is the large scale with which everything is created and presented. Everything from the theater to the orchestra to the sets is huge, he said.

“They don’t really hold back on these productions at all, and it’s a world-class venue, so they always pull out all the stops to make the shows (at Lyric) just incredible,” he said. “Everything accumulates to this gigantic masterpiece.”