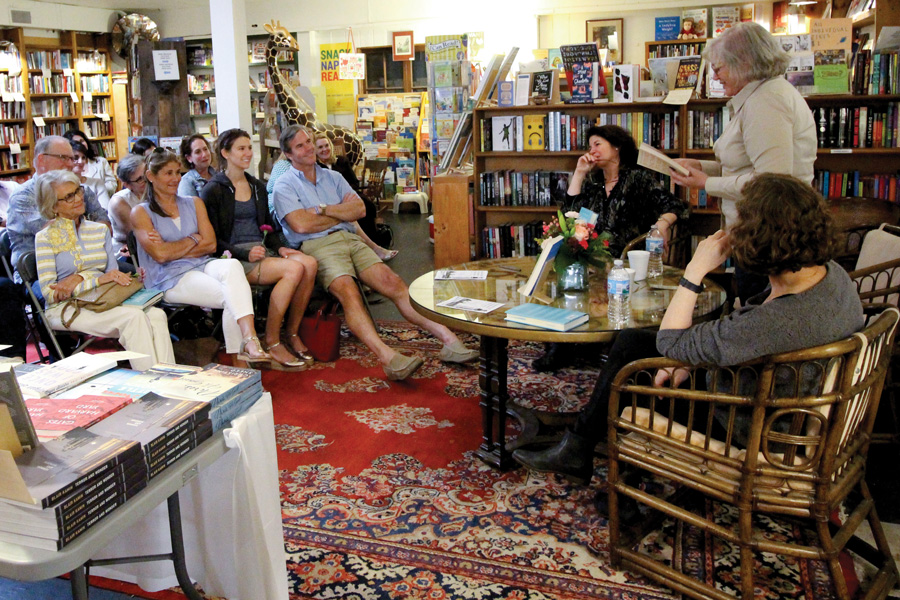 Writer Julia Sweeney reads to an audience at Bookends & Beginnings at an event during last year’s Evanston Literary Festival. The festival will return this Saturday to celebrate Evanston’s vibrant literary community.

Evanston will come together once more this weekend to celebrate its vibrant literary arts community.

The annual Evanston Literary Festival will return on Saturday, featuring an expanded program of events and guests. The festival, now in its third year, runs until May 11, starting with Independent Bookstore Day and continuing through Northwestern’s Spring Writers’ Festival.

The literary festival started after John K. Wilson and Lynn Haller — who are also co-organizers of the Chicago Book Expo — moved to Evanston a few years ago and wanted to organize a festival celebrating the city’s literary community.

School of Professional Studies Prof. Christine Sneed, a fiction author, has been featured in the festival for all three years and said Evanston boasts a supportive literary community.

“The festival is something that I think adds to Evanston’s profile as a place that is a really positive arts community,” she said. “It’s a community that really supports artists and art lovers and writers, too.”

Since its first year, the festival has continued to grow in the number of attendees and events, Haller, one of the organizers, said. She said more writers have been interested in getting involved in the festival. This year, there were more interested people than available spots, which Haller said speaks to the growing popularity of the festival.

“We’ve sort of built on our partnerships that we have and our successes and have gotten bigger and bigger, but we’re kind of trying to keep it at a reasonable size where we can ensure that each program is successful,” she said.

The festival features dozens of authors and events including a “Wildness Walk” with a nature writer, a stage reading of a play and several evening live literary events, according to its website.

Haller said she and Wilson are continuously trying to find creative ways to engage the Evanston community in the festival, with events held in various locations in the city. Writing workshops geared for women will be offered in the newly renovated Frances Willard House to offer an intimate event in a historic place, she said.

“We’re kind of evolving to make (the festival) more participatory … rather than people just listening to a great writer talk and then leaving,” Haller said. “Evanstonians like to participate. They have opinions, and they want to be heard, so we really want to celebrate the fact that we have so many educated people in the community.”

Nina Barrett, one of the co-owners of bookstore Bookends & Beginnings, said this literary festival comes at a “critical moment” for book publishers, sellers and authors because of the rising power of Amazon disrupting the industry. While Amazon drives down unsustainable prices, brick and mortar stores need to sell books at full price to sustain a community, Barrett said.

“(A bookstore) is a real place where you can come look at these books, you can sit down and read them for a while and decide if you’re engaged with them,” she said. “Having a literary festival is almost an act of defiance. … It’s really a statement that real literary culture is here.”